We are migrating services to UCS and deploying ACI.  We have had reports of a service (VDI) that is having issues when moved to a UCS blade.  I have into ACI and I see the that one of the endpoints is consistently transitioning between attached and detached between the 2 FI uplinks (see attached image).

I also noticed from the APIC that the endpoint was seen from both FI's at the same time (not sure if I executed the command during a transition change):

I have checked other endpoints (not going to the same UCS) and do not see the same behaviour.

Any help would be greatly appreciated,

Labels:
Preview file
167 KB
I have this problem too
0 Helpful
Reply
1 ACCEPTED SOLUTION

Cisco Employee
In response to joeharb

Where you need to fix things is on vCenter.  Ensure the Uplinks teaming on each Port Group is configured for "Route Based on Virtual Port ID".  Then you should be fine from there.  (You're likely using IP Hash currently). 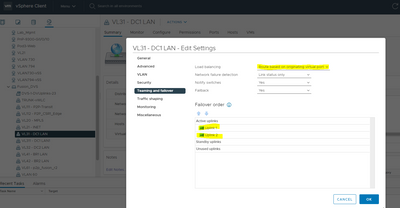 You will need to check on your hypervisor if you have both vmnics (in case of ESXi) are being used as Active uplinks.

You should change to Active/Standby.

Cisco Employee
In response to Sergiu.Daniluk

Sergiu is on the right track, but I wouldn't recommend changing any of your DVS uplinks to active/standby.  The Port Channel configuration for your VMM vSwitch policy is likely the issue. If your vSwitch policy is using any aggregated channeling (LACP or static) you'll see this with UCS.  The UCS FIs are not aggregate devices, so you can't treat them as such from a host uplink perspective.   Instead you should be using "Mac-Pinning" as the vSwitch port channel policy for the interfaces facing UCS hypervisors.    Here's a doc I put together that covers teaming options with ACI & UCS VMM.  You're mostly likely interested in Topology 6.

We are not using an VMM integration at this point.  The VPC to the UCS is configured with CDP/LLDP Enabled and LACP Active.  Should we investigate the ESXI host for this or UCS service profile?

Cisco Employee
In response to joeharb

Where you need to fix things is on vCenter.  Ensure the Uplinks teaming on each Port Group is configured for "Route Based on Virtual Port ID".  Then you should be fine from there.  (You're likely using IP Hash currently).