Unlike Webex, which has a dedicated site where users can make suggestions to improve the product, ACI has NO such public facility (that I know of - happy to be corrected - and yes I've already submitted these via the Feedback option in ACI, but I have no idea if they are even ever read). So let me make some suggestions here.

There is no support for L3Out on a FEX.

BUT if you have a FEX, and you are configuring an L3Out, and choosing an interface from the drop-down list, all the FEX interfaces are listed - AND EVEN MORE ANNOYING - they are listed first.

SUGGESTION: Don't list the FEX interfaces in the interface drop-down when configuring L3Outs 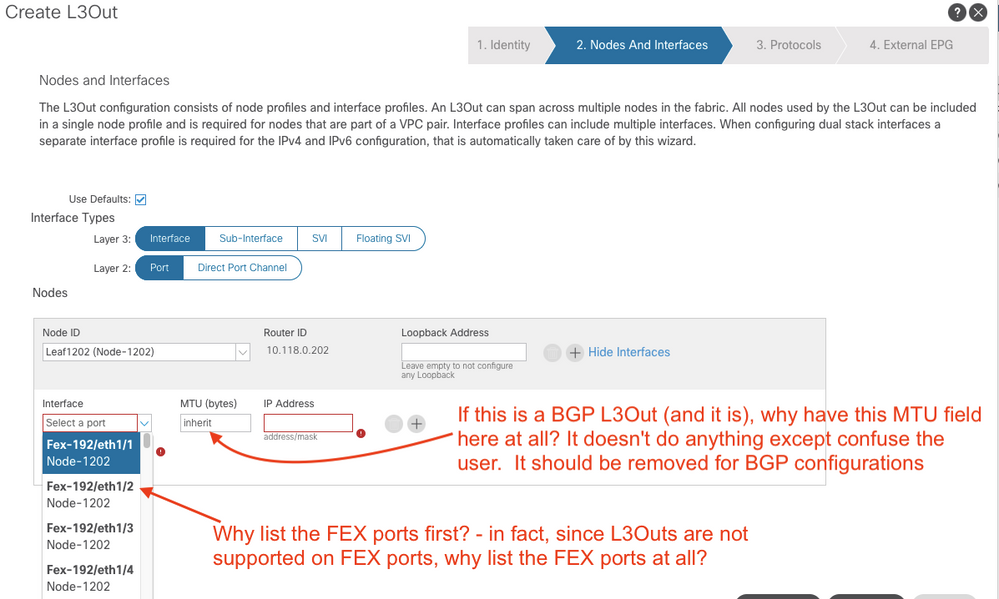 When creating an L3Out for BGP, at the interface configuration, there is an option to specify the MTU.

This has no meaning in relation to BGP. BGP uses TCP.  And setting it (I believe) has no effect on anything.

Labels:
I have this problem too
10 Helpful
Reply
6 REPLIES 6

I'll be playing the devil's advocate for a moment here

The suggestion 2 and 3 sounds like cosmetic bugs, which I agree, can confuse the users, especially the s2, but still it remains as cosmetic bugs. Now these are usually filtered through TAC, to avoid dumping all the not-super-important defects on developers, so they could focus on higher priority bugs. For example, S2 will be a good candidate for a P4 bug, s3 - I can live with it, it doesn't bother me.

However, a feedback website it's definitely a GREAT IDEA, where suggestions can be submitted and users can vote and Cisco ACI BU/TME team to monitor that website. I believe you can do it in the CCP section of cisco community, however it doesn't look to be monitored by someone from a technical team - I suggested a dark theme for the GUI, which let's be honest - will be a great add-on for day-to-day operations.

Thanks for the input Chris.  I'll pass the feedback along through the team here.  Some comments.  The Feedback that is submitted via the UI directly is reviewed regularly.  We've used this facility very well on DNAC and other platform solutions to great impact.  As with any feedback its a balancing act of priorities.  There are limited dev resources and cosmetic enhancements are at the bottom of the food chain.  I do like the public ranking of enhancement requests though, let me see what I can come up with for this - stay tuned.

The UI filter of FEX interfaces appearing in an L3Out selection, is simply the same interface-lookup call used everywhere else in the system.  They'd have to branch and customize that piece of code just to appease the few customers a) deploying FEXs and b) bothered by it.  Certainly not impossible, but I haven't heard or seen any other customer request this either. Even with the weight of your feedback, its a tough solo-sell

Same applies to BGP L3Outs.  It's just re-using common UI panels.  They'd rather include an used-non-mandatory field in the panel, rather than customize it for each protocol.

Advocate
In response to Robert Burns

Thanks for contributing. I agree the FEX thing is only cosmetic, and given that the number of people that this bothers is small it is probably low priority. 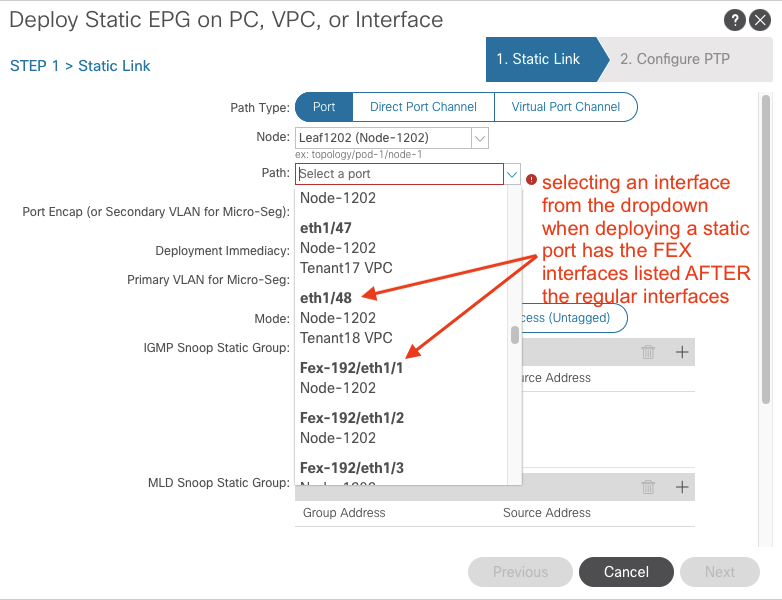 The MTU field appearing when it is not required is more serious. ACI is confusing enough, especially L3Outs. I have long believed that not NEARLY enough though went into the user interface for the APIC UI, almost as if the designers set out to confuse users with MANY instances of inconsistent naming*.

So the point being that there is NO excuse to have a field showing that, if filled in, is NOT applied to the configuration.  At the VERY LEAST, if a standard template MUST be used, the template could show a message such as Not used in BGP L3Outs appearing below the field, much the same as the Leave empty to not configure any loopback message appears on the same dialogue.

I'll leave it there, and hope SOME changes are made. 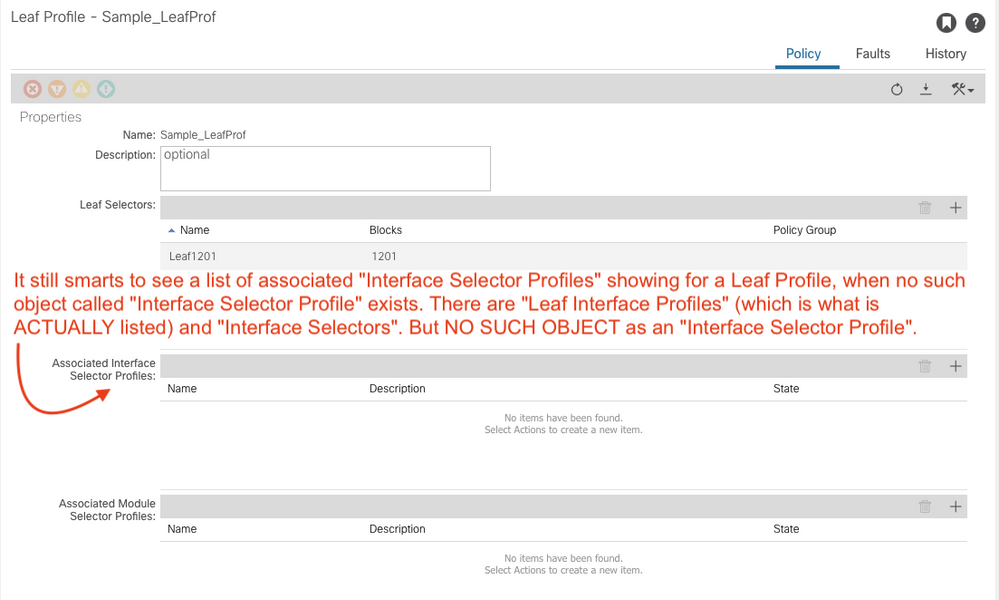 VIP Advocate
In response to RedNectar

Cisco Employee
In response to RedNectar

I had a chat with our UI Dev team.  We should be able to fix both the MTU & FEX Interface issues for L3 Outs - I'll provide the CDET IDs so you can track these on your end once finalized.

For the naming inconsistencies, can you guys do me a favor and start a new thread to track/list all inconsistencies you can think of/find?  I'll take this back and see what can be done to clean it up.

Your feedback doesn't fall on deaf ears.  We'll continue to improve as you continue to provide feedback!

Advocate
In response to Robert Burns