The issue described in bug report CSCux87714 is now affecting our infrastructure.

The pipe character naming convention, used by ACI when deploying EPGs to VMware as portgroups - may be valid via the VMware API used during the portgroup creation - but invalid later when accessed through the VMware SDK.

This is the situation described in the following Veeam document https://www.veeam.com/kb2074.

The bug report mentions a number of releases as affected by this bug, and later releases as fixed - but what does this mean?

Can the use of the pipe character be overridden in these releases?

The bug report doesn't mention that - just that the known issue is fixed in the later versions.

That means the delimiter character can now be configured: 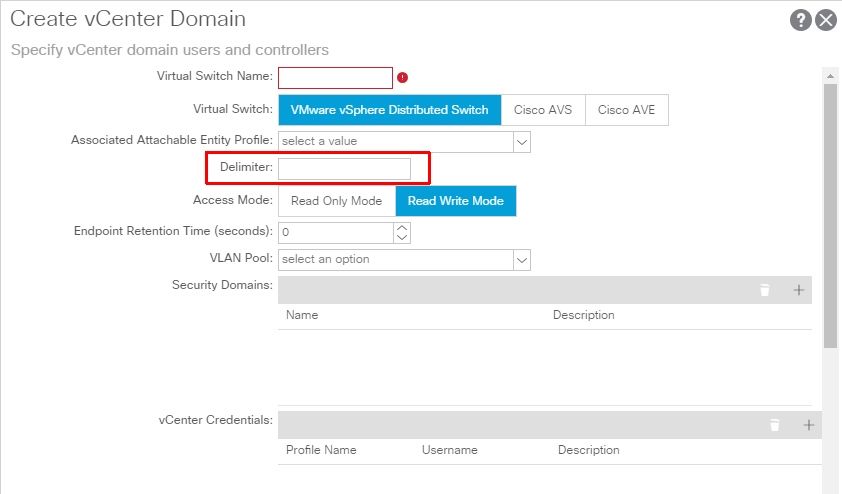 Beginner
In response to Remi Astruc

That would be perfect, unfortunately for us - all of those characters are on the list that are invalid for the VMware SDK.

Beginner
In response to ferrus

Latest Contents
UCS Guided Workflow Experience
Created by Buddy Priest on 09-14-2021 10:31 AM
0
0
0
0
Guided workflow allows for automated troubleshooting cases (non-RMA) and RMA creation process for Service Requests (SR) opened for Cisco products. Customer Benefits: Less troubleshooting - the IRE (Intelligent RMA Experience) Prediction Engine does ... view more
Asset Recovery EMEAR Guide
Created by achernev on 06-17-2021 06:27 AM
0
0
0
0
1. Asset Recovery EMEAR - Scope2. Cisco Returns Portal – Quick Overview3. Update your RMA – Options and Walkthrough4. POWR Tool and How to Return - Quick guide and Scenarios5. Returned but not closed - Frequent Scenarios6. I cannot return my faulty part. ... view more
CSCud62892 - UCCX Maximum Length of Agent IDs Inconsistent
Created by Michael Hargrove on 04-14-2021 10:20 AM
0
5
0
5
This issue has been resolved in 12.5(1) SU1 Unified CCX now supports Agent ID with 64 alphanumeric characters.
SNTC PORTAL ACTIVATION
Created by soboliva on 03-24-2021 02:42 PM
0
0
0
0
Hi!    Yesterday I request that the CCOID of one of my customers get linked within the SNT  contract for them to be able to have a SNTC portal, however no portal is up after 30 hours
CSCvc94546 - UCCX Finesse fails to log in agents with error ...
Created by jorgefl on 02-24-2021 11:55 AM
0
10
0
10
Full analysis if the problem  The root cause behind this problem is the delay in sync between CUCM and CCX. CCX and CUCM has an automated sync mechanism which might vary from 5 - 10 minutes based on various parameters. Also there is an option to sync... view more
Ask a Question
Create
+ Discussion
+ Blog
+ Document
+ Video
+ Project Story
Find more resources
Discussions
Blogs
Documents
Events
Videos
Project Gallery
New Community Member Guide
Related support document topics