Turn on suggestions
Auto-suggest helps you quickly narrow down your search results by suggesting possible matches as you type.
Showing results for
Search instead for
Did you mean:
Start a conversation
Options
4661
Views
0
Helpful
9
Replies

However, after checking the Package Size on Disk and comparing it to what I see in the CM 2012 R2 console, are entirely different.

On Disk, I see that the driver package is 107MB

When I try a deployment of the OS, there are only 1.8MB of drivers downloaded from the CM distribution Point and the OS ultimately blue screen due to missing boot driver.  Is anyone experienced in troubleshooting this issue? 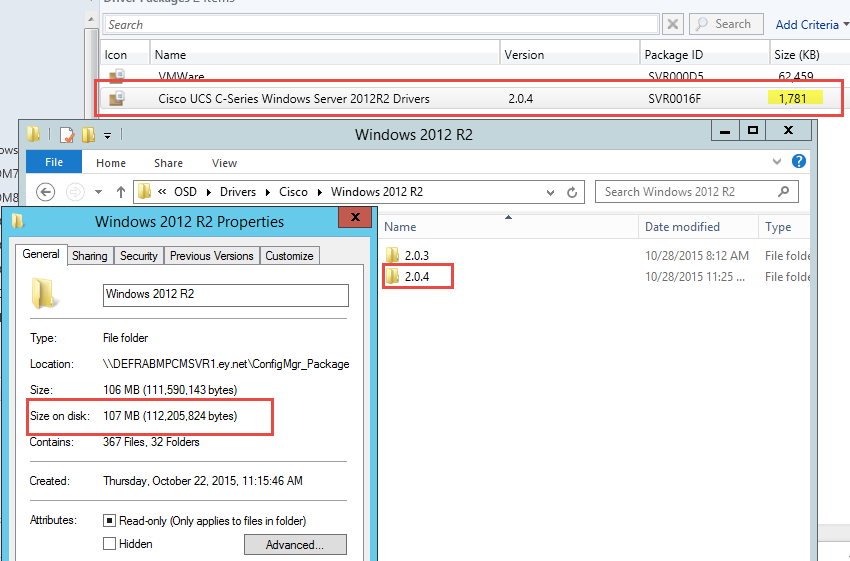 I did give a try at my end and I see that size is proper for the 2.0.4 driver package that I imported using the wizard. screenshot below.

Also it would be good if you can submit a case with Cisco TAC to proceed further in debugging this issue.

First of all, thank you so much for taking the time to look at this problem.

It's difficult to share the whole log .. I guess you can't upload logs here.  So, I tried to use a few screen shot captures. 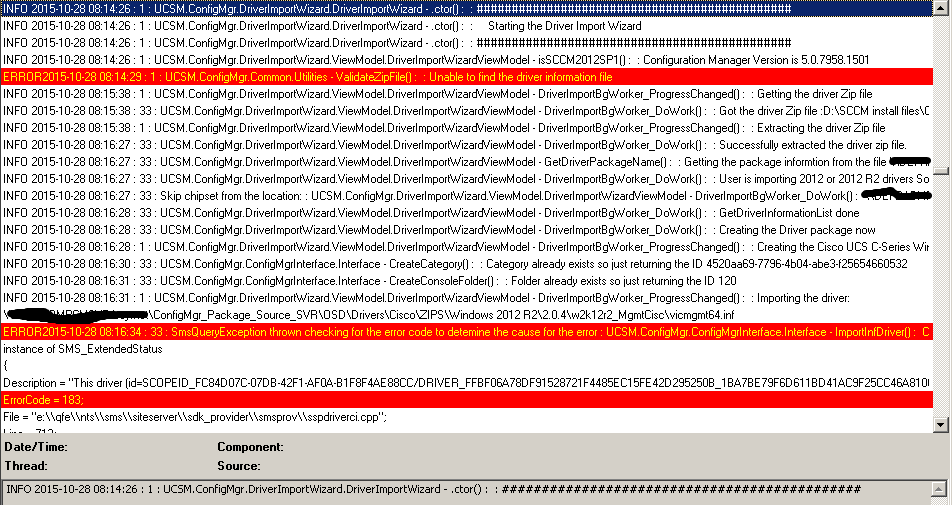 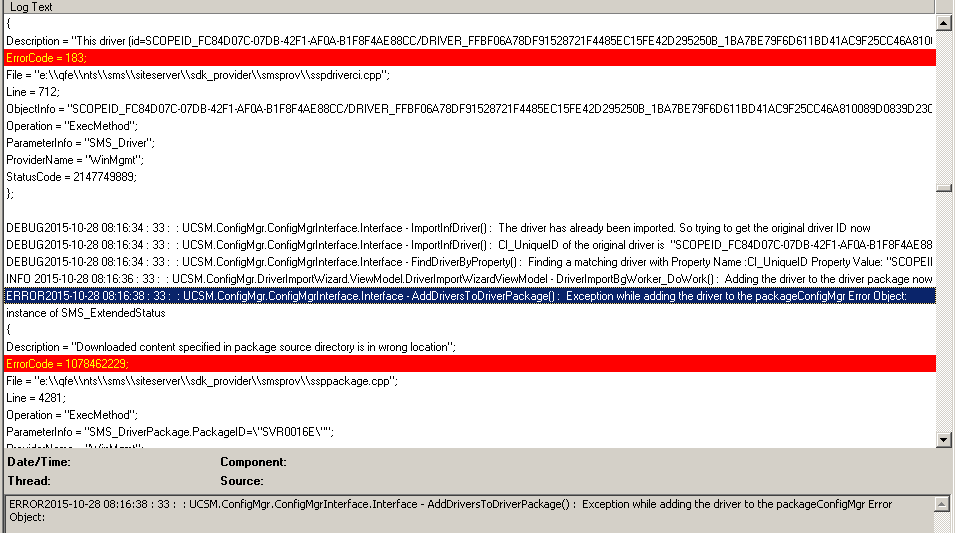 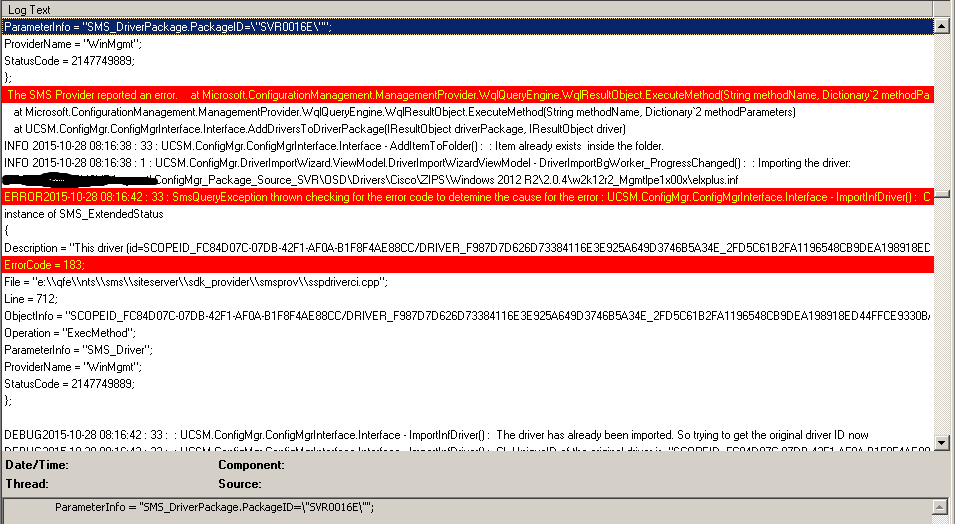 My driver ZIP was downloaded from here:  I check the HASH after my download and found that it matched.

In the first post the version of driver zip mentioned is 2.0.4 but in the latest one you have mentioned the version as 2.0.8a. Can you please raise a case with Cisco TAC so that we can debug further  on this issue. Raising a case will also help us getting the log files.

When you import the " version as 2.0.8a" file in CM, the resulting package that is created is 2.0.4 as seen in my original screen shot.

I don't know why this happens, as I'm new to Cisco.  I was confused as to why Cisco calls the file one version and when you import it, CM calls it a different version???

I'm working on seeing how my company has support with Cisco (I would assume that you need a support contract to open a call) and we are in the "evaluation" phase of using Cisco servers.

Beginner
In response to joe.poandl
Options

when I import driver zip 2.0.1, I don't get these errors.  The size on disk is 50MB+ but the SCCM console still shows 1.8MB.  My OSD still fails with this driver package.

when I try to manually apply these drivers to my B Blade, there are still many missing drivers (yellow bangs in device manager) that cannot be repaired by the driver package created.  (I copy it manually to the server and try to apply them -- but this fails)

Beginner
In response to joe.poandl
Options

Been playing with this a bit more.  I think I have found a work around (or maybe this is expected behavior). 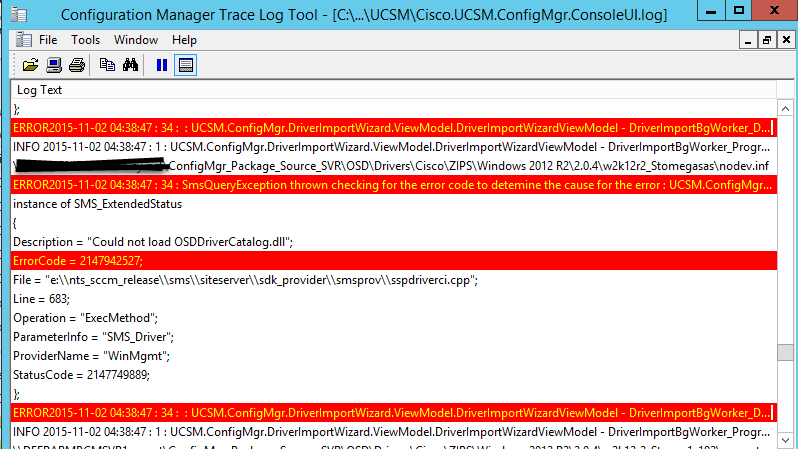 I see that the version of SCCM is CM 2012 R2 SP1. The current release of the Cisco UCS Manager Integration Pack 1.0.1 is not supported on this version of the SCCM.

lol.. do you really want to make that statement?

Its common in the industry to not update the release notes for each and every SP or CU update.  The last time this article was updated was March 9th, 2015. -- probably near the time the product was released from Cisco.  The vendors are often lazy about updating release notes.

There is logic in place in the Cisco UCS Manager Integration Pack to handle the duplicate drivers. However there seems to be some changes in the SCCM side in case of the SCCM 2012 R2 SP1 release. Due to this you are seeing the issue. We will look in to the issue and address this at the earliest.