This PowerShell and PowerTool script connects to one or more standalone UCS C-series and E-series servers querying it/them for hardware details. Using that information it generates an excel spreadsheet presenting the inventory in the form of an outline. Besides model, part number, etc. it also lists for each element the serial number and firmware version.

There are a few parameters, the most important being '-show' which controls the level of detail you get to see. At level one you see only an overview of the C-series or E-series server At two the scripts adds CPUs and memory, then all the way up to five where you will get detailed info on each and every DIMM. 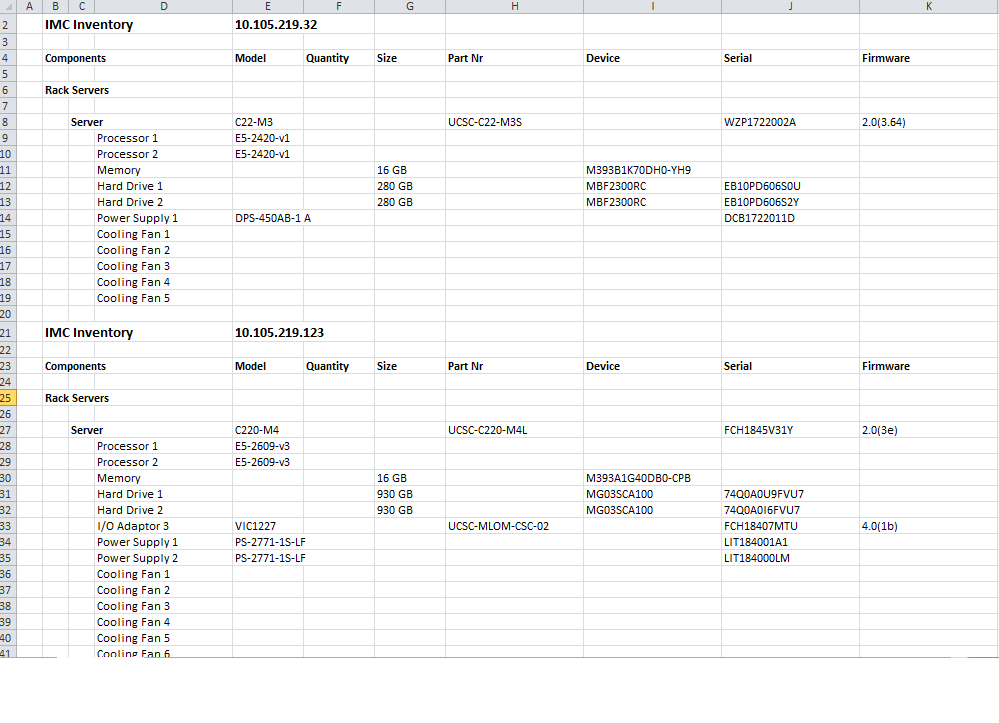 The advantage of having it in a spreadsheet is that it can be used for modelling the data, for example when doing capacity planning for a tech-refresh. But for others it will be simply a tool for asset tracking.

Few points to be aware of:

If you are looking for a similar script for fetching the inventory details of a UCS domain managed by UCS Manager, go to -

Script is working fine with CIMC Firmware 2.0 but is not working with Firmware 3.0

Hello - Do you happen to have additional details here, and possible error messages you are seeing?

I got the error message below:

OK thank you. And what exact server model and IMC version are you running?

OK great - and I also should have asked what version of Power Tool you are using?

The new IMC FW versions have enhanced TLS security among other changes and are not compatible with older modules. We are also making some slight changes to the script you are using, but you should be able to generate the files with the newer power tool version.

I downloaded the last version of PowerTool (version 2.3.1)

But I got the same error trying to login to CIMC version 3.

Hi there - please email me at grewilki at cisco dot com with the errors you are seeing. I will reply to you offline.

I had to make some changes to get this to work with PowerTool 2.4. The changes are in line with the changes Willem made to the script for B-Series. Works great

the script is running fine for our C-Series Server, except for UCS C3260 (2x UCS C3X60M4).
The csv files contains serials and assets of booth C3X60M4, but serial of C3260  is missing and xlsx files are not generated.

Is there an update of the script planned for the future?

Hi Carsten - apologies for the issues you are facing. Please try the latest scripts v2.1 and let me know if this version addresses your concerns.

Latest Contents
imcsdk for vic adpater backups
Created by christopherjolley on 04-15-2021 10:27 AM
0
0
0
0
I'm working on scripting out config backups of standalone c240 servers using the utils module of the imcsdk for python: https://ciscoucs.github.io/imcsdk_docs/imcsdk.utils.html?highlight=backup_create#imcsdk.utils.imcbackup.backup_create This wo... view more
UCS vNIC Redundancy
Created by joshwa on 04-15-2021 08:24 AM
0
0
0
0
I am unfamiliar with vNIC Redundancy Types: Primary and Secondary. What is the purpose and how do they work?I understand Primary is setup with Fabric A, Primary and set the Peer to vNIC B and the setting stay. But how does it work inside a system? Does it... view more
PowerShell script to check vNIC number Fabric Failover valu...
Created by reddyks on 03-14-2021 04:34 AM
2
0
2
0
PowerShell script to check vNIC Number Fabric Failover value on Rack-Mount and B series servers from UCS manager we need to check Fabric Failover details on all C series and B series servers in UCS manager .  below is the screen-shot&n... view more
Unable to use UCS Manager plugin for vRealize Orchstrator af...
Created by msnellen on 02-11-2021 09:04 AM
0
0
0
0
Some time ago we decommissioned one of our Cisco UCS Fabric Interconnect configurations. At the time we did not think to remove it from vReallize Orchestrator. We have now run into the situation that the UCS Manager Plugin always says 'Error in plug-in' w... view more
UCS Config Tool/Utility ?
Created by SamN on 02-08-2021 09:50 PM
0
0
0
0
Hello, Is there a link to download the UCS Config Tool/Utility? Thanks
Create ContentLogin to create content
Question or Discussion
Blog
Document
Project Story
Video
Related Content
Discussions
Blogs
Videos
Project Gallery
Content for Community-Ad