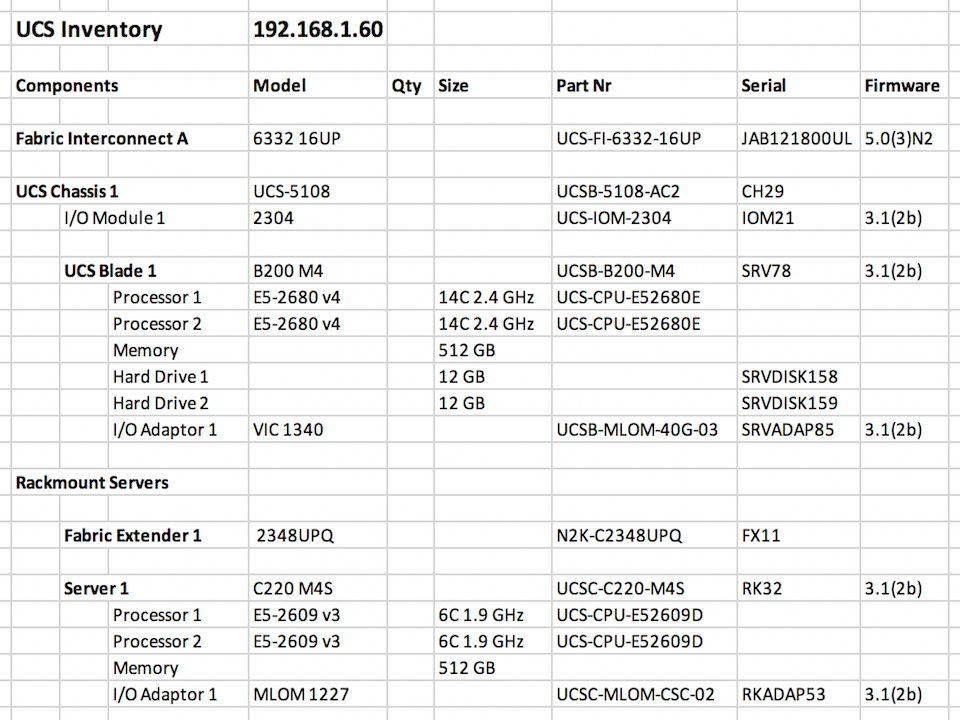 Sean, the UcsInventory script is a dual stage process. First stage is to collect UCS data from the FI's and then store that in a bunch of .csv files. The second stage is taking this data to create an Excel spreadsheet. My suspicion is that it could have to do with your version of Excel. But tough to say with just the information in your message. 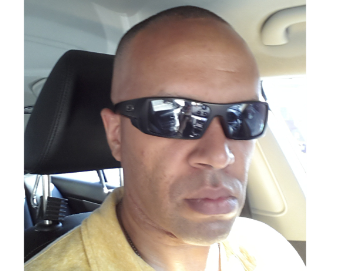 Thanks. Office 2010. I thought as much after looking at the script, it doesn't appear to do the second half. What version was it written for?

Office2010 should be no problem

for example replace the $PSScriptRoot variable with a hard coded pathname

wschaik Not sure if you are still looking at this as it is over a year old. But wanted to say thank you.

there is one issue though when you get into Chassis being 10-19 or 20-29 and so on it will add the equipment like Fans from Chassis 11 to Chassis 1 List and so on for 20's to Chassis 2 list.   I have been dissecting your code but still a

thanks for letting me know, I will take a look and fix it

Thanks for the update.  There seems to be a bug (even in v2) where rack mounts and blades get merged together for Chassis 1 and server 1.  We just added our 20 rack mount and I notice that it does it to Server 2 now as well.  We have 14 Chassis and 21 Rack mounts in the domain I am using as the example. 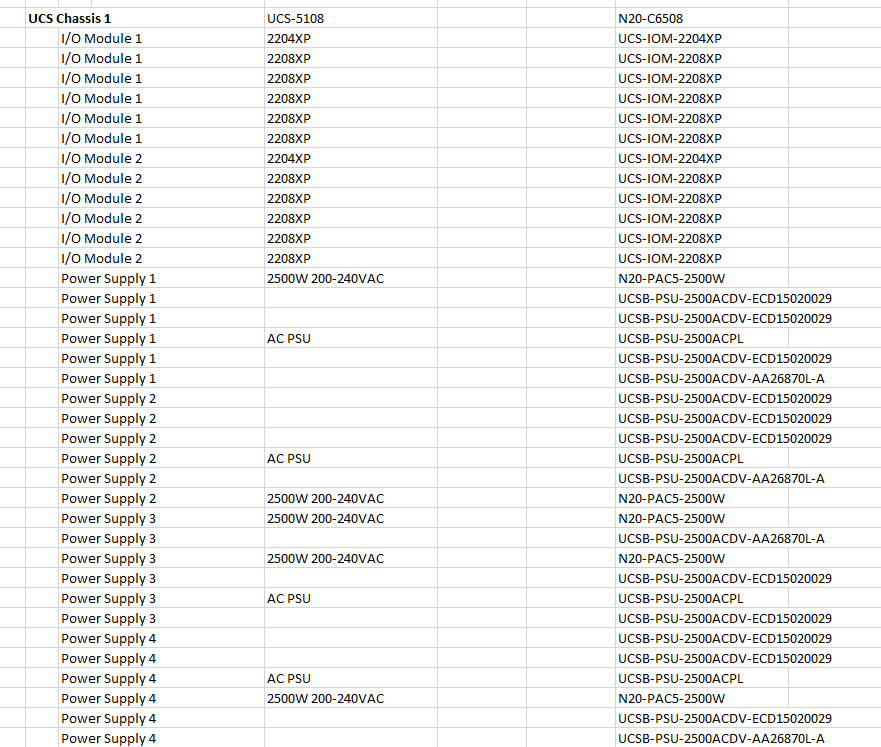 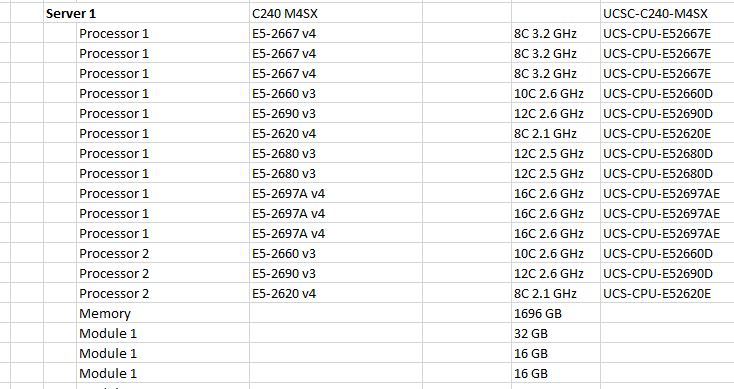 Sorry, I just noticed the guy above me reported it already.

I am new to powertool and trying to run this script , It keeps giving me error "Can't create Excel spreadsheet, is Microsoft Office installed?" however I can open the spreadsheet tpo prove I have excel installed .

Looking at scrip I found it's calling spreadsheet ucsinventory "$xlsFile = $PSScriptRoot + "\UcsInventory.xlsx"" however ZIP file has ucsinventoryPE, giving that I renamed the file to ucsinventory.xlsx and ran script again , it gave me same error but this time deleted ucsinventory file from directory,

can somebody advise where I am doing wrong ?

It keeps giving me Excel error , can somebody help , I already have excel installed and I have RW access to folder

I think it exiting once it hits below lines

Latest Contents
Unable to use UCS Manager plugin for vRealize Orchstrator af...
Created by msnellen on 02-11-2021 09:04 AM
0
0
0
0
Some time ago we decommissioned one of our Cisco UCS Fabric Interconnect configurations. At the time we did not think to remove it from vReallize Orchestrator. We have now run into the situation that the UCS Manager Plugin always says 'Error in plug-in' w... view more
UCS Config Tool/Utility ?
Created by SamN on 02-08-2021 09:50 PM
0
0
0
0
Hello, Is there a link to download the UCS Config Tool/Utility? Thanks
Import UCS Emulator Config from 3.1.2 to 4.1
Created by anofzinger on 10-22-2020 09:25 AM
0
0
0
0
I am building a training lab environment and have an existing 3.1 emulator. I have downloaded and installed the new 4.1 emulator. I copied the HW configs and backup configuration from the old system but am having issues setting it up on the new version An... view more
UCS Central plugin 1.0.1 problem with vRealise Orchestrator ...
Created by ramsed on 09-09-2020 01:52 AM
0
0
0
0
Hello all, I worked on a vRO workflows (vRO 7.5) to automate the cisco blade integration. This service was up for the last few months with no problems.But lately, my ucs-central plug-in (1.0.1) stopped working, therefore I can no longer see or work w... view more
Cisco UCS Manager Plugin for VMware vSphere without IIS
Created by ethandlowry on 07-22-2020 09:07 AM
0
0
0
0
With all VMware Products and most other vendor products converting to Appliance based, the fact that the UCS Manager Plug-in for VMware still requires an IIS server to function is crazy. When everyone's VMware infrastructure was Windows Based this was fin... view more
CreatePlease login to create content
Discussion
Blog
Document
Project Story
Video
Related Content
Discussions
Blogs
Videos
Project Gallery
Content for Community-Ad