Cisco Community
English
Register
Login
Let us know how you are using BREAKOUT SESSIONS in Webex for a chance to win a Cisco 730 headset!
RegisterLogin
Turn on suggestions
Auto-suggest helps you quickly narrow down your search results by suggesting possible matches as you type.
Showing results for
Search instead for
Did you mean:
Announcements

OpenDaylight - It Just Got Real 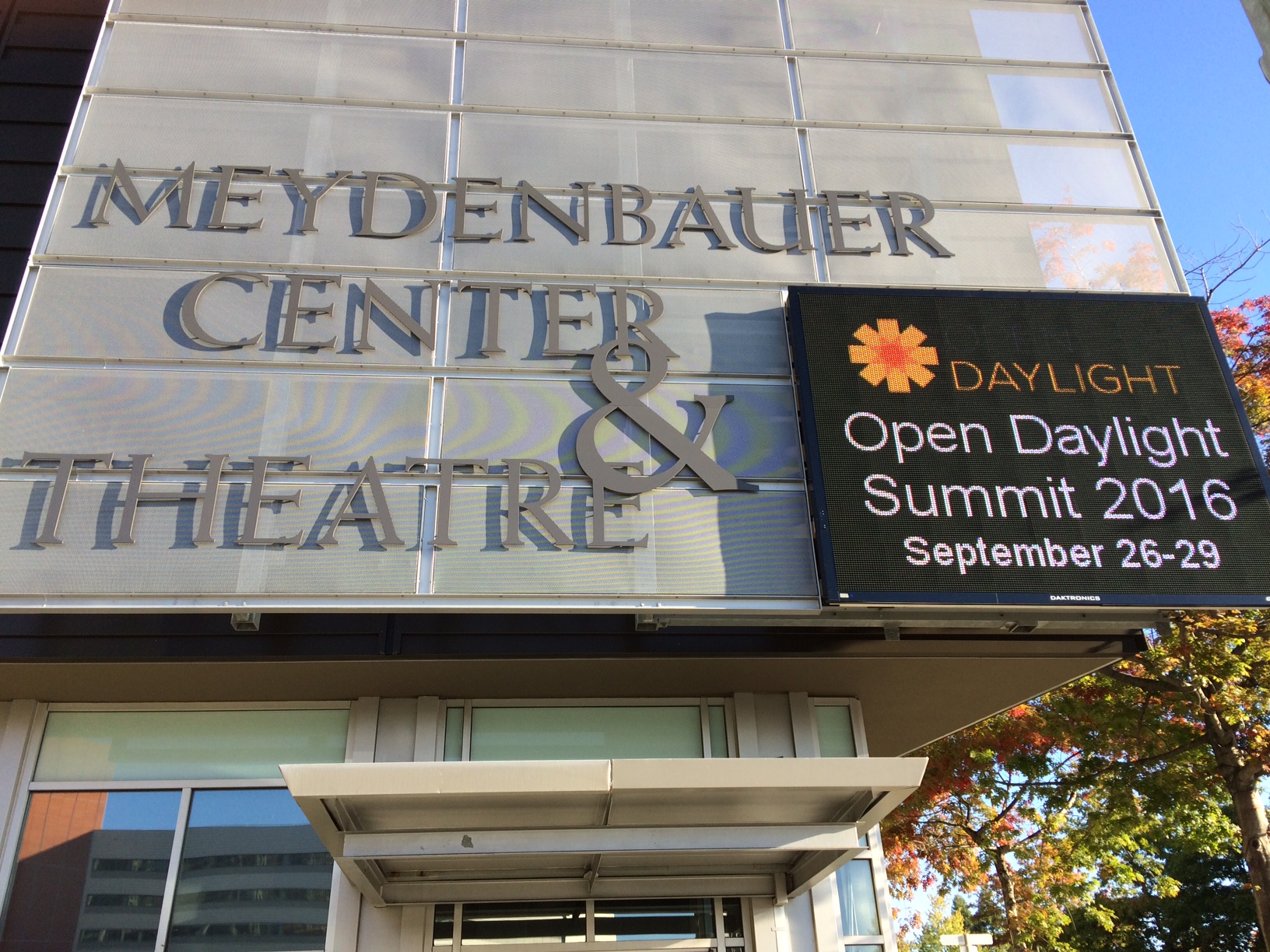 “It Just Got Real” was the theme of OpenDaylight Summit 2016, and it rang true throughout the entire summit. A great group of developers and end users came together to celebrate the accomplishments brought forth in the most recent release, Boron; share successes and lessons learned deploying OpenDaylight at large scale; and chart a course for making OpenDaylight even more solid and feature rich in the next release, Carbon. From start to finish, it was humbling and heartening to be a part of such a diverse group of talented and motivated individuals coming together to work passionately yet constructively on the networking platform that is OpenDaylight.

The summit opened Monday with a set of in depth tutorials and workshops. Two that I managed to catch where the FD.io Mini Summit and a series of sessions that focused on OpenStack and OpenDaylight Integration. One particularly encouraging aspect of the integration was the coming together or what had been multiple project specific NetVirt implementations into a single NetVirt project within OpenDaylight. Now we have a single project to which to contribute new functionality and enhancements.

The main conference was Tuesday and Wednesday. Neela Jacques, OpenDaylight Executive Director, kicked things off with his inspiring overview of the state of OpenDaylight. He highlighted several large and successful deployments of OpenDaylight, including those by AT&T, Comcast, TenCent. In speaking of the growing maturity and success of the project, he unveiled its “Secret Sauce”, its “Developer/User Intimacy and Collaboration”. 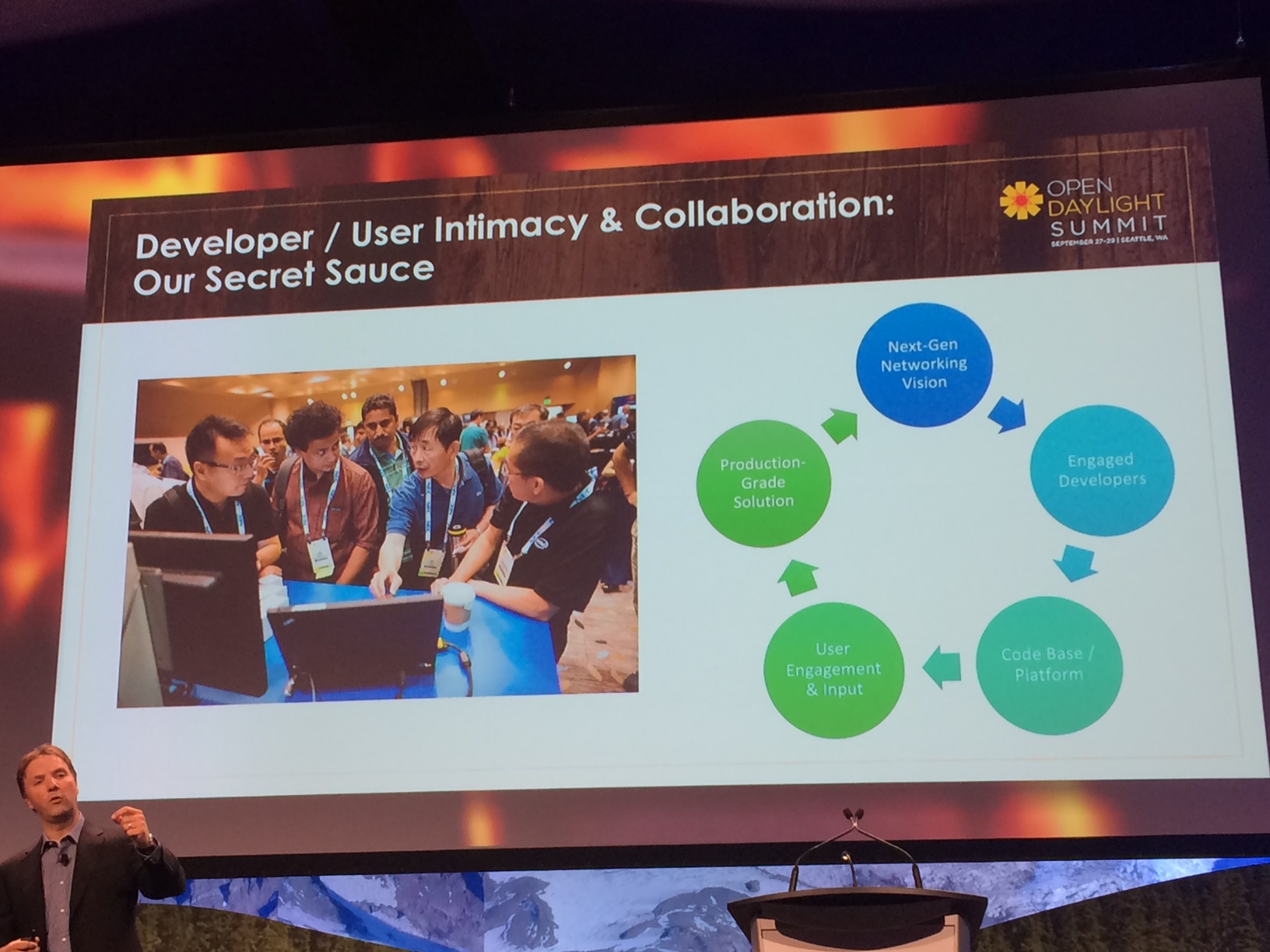 To hear more about how Tencent is using OpenDaylight, check out this keynote presentation by Tom Bie, VP Tencent.

In a later session, Brian Freeman went into more details on its Enhanced Control, Orchestration, Management and Policy (ECOMP) platform, a project AT&T plans to open source soon. It is based on OpenDaylight and serves as a great example of the power and flexibility gained by using YANG models not only for modeling network devices but also for modeling network services. 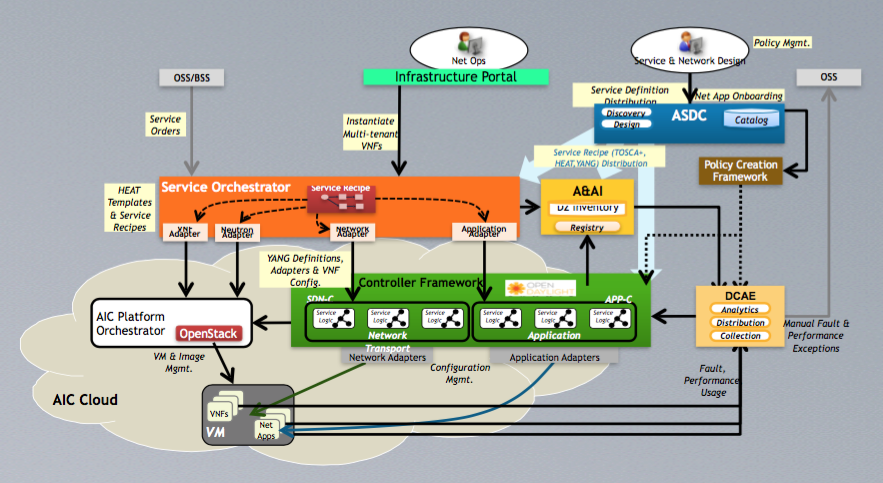 Throughout the course of the conference, we enjoyed sharing with you all the open source applications we have built on top of OpenDaylight. OpenDaylight is truly a great platform for building a wide range of application, including networking aware apps and apps for IoT, as we demonstrated in our booth. In case you missed it or if you want to get your hands on the code, check out our OpenDaylight Apps page.

Near the end of the main conference agenda, I had the opportunity and pleasure to share with the OpenDaylight community the work that is going on in MEF Forum to standardize Lifecycle Service Orchestration (LSO) through the definition of a set of interface points and corresponding APIs. I teamed up with Pascal Menezes, MEF CTO, to deliver this talk and a call to action to the to the OpenDaylight Community to join us in our upcoming LSO Hackathon at MEF16.

OpenDaylight within Reference Implementation for Next Generation Network Services

As the main conference wrapped up, the Developer Forum kicked into high gear. Wednesday night we had some fun and got to know one another better at a social event at a local bowling alley. I now know I am even worse at bowling than when I last bowled 10+ years ago. But not worry, I was in good company with much of the OpenDaylight Community. It is a good thing this group is better at coding than bowling. Of course, Neela, who must have had a hand in the selection of the venue, thrashed us all as he threw one strike after another.

Thursday witnessed the OpenDaylight Community asking itself hard questions, admitting its shortcoming, and demanding better of itself for the benefit of the OpenDaylight project and its growing community. For me, this brought things full circle to the keynote that kicked off the summit and the developer/user intimacy and collaboration of the OpenDaylight Community. I invite those of you who have not yet experienced OpenDaylight yet to dive in and get involved. I am pretty sure you will like what you find on personal, technical, and professional levels. I used what I learned at the summit to submit by first patch. It was reviewed, accepted, and integrated earlier this week - hurray!

For access to slides and recordings of all the session delivered by myself and my colleagues at this year’s summit, including tutorials on NETCONF/YANG and on BGP and PCEP, an introduction to FD.io, Composing Fast Data Stacks with OpenDaylight and OpenStack in OPNFV, and more, check out OpenDaylight Summit 2016 Presentations.
2 Helpful
Share