This document covers the basics of Globalized Call Routing and the number formats used globally to implement Ingress and Egress calls. With the globalized Call routing Service Providers/Enterprise customers can establish a standard numbering plan & format for the call routing and simplify the dial plans.

With Globalized call routing, all calls that involve external parties are based on format with the purpose of simplifying the International multisite dial plans. All numbers are normalized as follows.

Normalized calling-party numbers: E.164 global format is used for all calling-party numbers except calls from a internal number to another internal number. Such purely internal calls use the internal directory number for the calling party number. If source of calls (users at phones, incoming PSTN Calls at gateways, calls received through trunks, and so on) do not use the normalized format, the localizes call ingress must be normalized before being routed. This requirement applies to all received calls (coming from gateways, trunks, and phones), and it applies to both the calling and called-party numbers.

Calling- and Called-party numbers for calls that are routed to gateways and trunks:

Calling-party numbers for calls that are routed from gateways or trunks to phones:

This situation applies to the phones user who does not want to see caller IDs in a global format. For example, if a user at a U.S phone wants to see the numbers of PSTN callers who are in the same area code, that user may want to see each number as a seven-digit number and not in the +1XXXXXXXXXX format.

Globalized call routing simplifies international dial plans because the core call-routing decision is always based on the same format, regardless of how the number was initially dialed and how the number looks at the egress device.

Figure describes the number formats that are used by globalized call routing and explains some commonly used expressions. 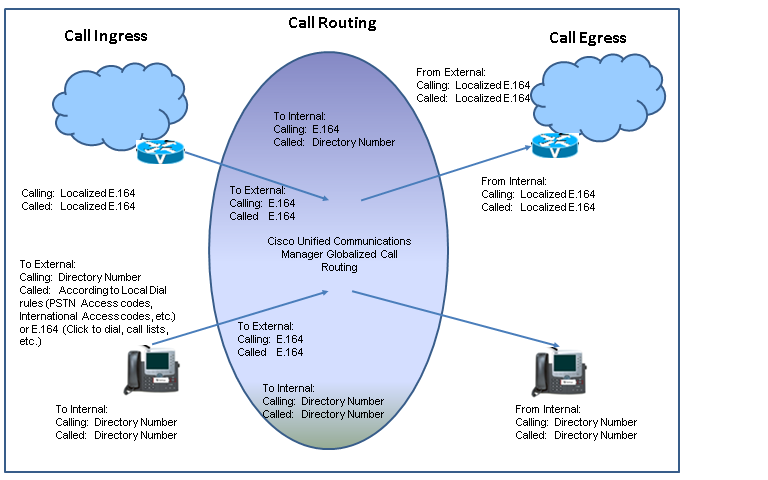 Latest Contents
Desk pro Type-c features not working on MAC book pro
Created by Soundar on 06-26-2022 12:52 AM
0
0
0
0
Hi I connected my Mac book pro to Desk pro device via type-c cable and facing below issue  Desk pro touch passthrough functionality not working MAC book not detect desk pro microphoneWhen try to increase & decrease the volume via m... view more
dial-peer
Created by kaso_baxtiar on 06-25-2022 01:22 AM
4
0
4
0
dears I have some conflict with the configuration I have in my voice gateway which is already configured and I want to review it and get the full understanding of what those commands referred to in the dial-peer configuration I have the following configur... view more
Cisco Meeting Server Clustering and Certificates document
Created by Meddane on 06-24-2022 04:11 PM
0
0
0
0
I just finished to write a comprehensive certificates preparation for Cisco Meeting Server Clustering. Through 60 pages I explained in detail, how to create certificates for database cluster, callbridge cluster, certificate chain for webbridge3, certifica... view more
scripting skills ??
Created by Iluvteak on 06-24-2022 12:29 PM
5
0
5
0
I work with CUCM and keep seeing job requirements wanting 'scripting' experience.     I've asked a few people what they use scripting for in CUCM and nobody has a good answer.    FYI - my current team does no scripting so I don't ... view more
Jabber placing call on hold - SIP question
Created by Iluvteak on 06-24-2022 11:58 AM
0
0
0
0
I noticed on a SIP trace that when Jabber is taking a call off hold that it sends 2 SIP re-INVITE's -- one with SDP and the second with no SDP.    Can someone explain why this is so ?       What is the purpose of the 2nd re-I... view more
Ask a Question
Create
+ Discussion
+ Blog
+ Document
+ Video
+ Project Story
Find more resources
Discussions
Blogs
Events
Videos
Project Gallery
New Community Member Guide
Related support document topics