Editor's note: Thanks to Diya Mathew for providing this month's  Chalk Talk article. This article appeared in the August 2013 issue of  the Cisco TS Newsletter.  Are you subscribed?

Many administrators choose to implement CME with security. This document describes how to configure Secure CME to operate with secure signaling and media as well as how to troubleshoot any issues along the way by analyzing debugs.

First and foremost, it is important to note that in a secure environment, devices can communicate with each other only if they have the other party’s certificate. Here are a few relevant terms you’ll come across often:

In OSI model equivalences, TLS/SSL is initialized at layer 5 (the Session layer) then works at layer 6 (the Presentation layer). In both models, TLS and SSL work on behalf of the underlying transport layer, whose segments carry encrypted data.

CME phone authentication uses the PKI capabilities in Cisco IOS software for certificate-based authentication of IP phones. Every device participating in a secure communication is enrolled in the PKI using a process in which the device generates an RSA key pair and has its identity validated by a trusted entity (also known as a certification authority [CA] or trustpoint).

Figure 2 depicts all the components that can be enabled in a single CME router (or external router) to setup a secure network: 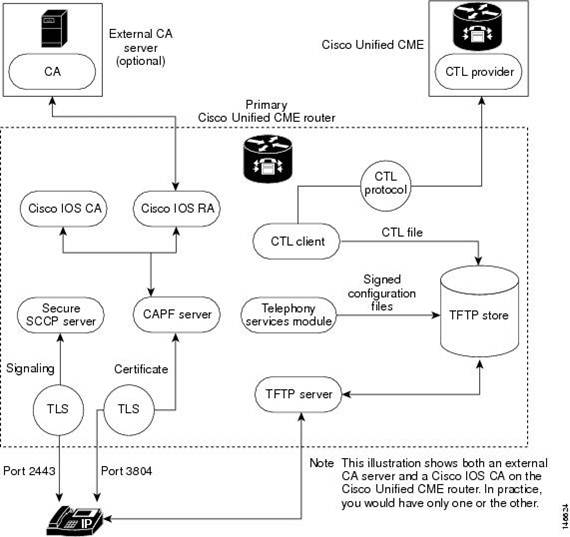 CA is the trusted entity that signs certificates. The CA issues certificates to CME, SAST, CAPF, and TFTP functions. If the CA is a third-party CA or if the Cisco IOS CA is on a Cisco IOS router external to the CME, you must configure an RA on CME router to issue certificates to phones.

The next step is to create a Certificate Trust List (CTL) file, which is a list of known, trusted certificates and tokens. After you configure the CTL client, it creates the CTL file (CTLfile.tlv) and makes it available in the TFTP directory. The CTL file is signed using the SAST certificate's corresponding private key. Configure a CTL provider on every other CME router in the network which is not running CTL client.

The telephony service module signs phone configuration files and saves it in SEP<mac-address>.cnf.xml.sgn format. When an IP phone boots up, it requests the CTL file (CTLfile.tlv) from the TFTP server and downloads its digitally signed configuration file.

The CAPF is like a proxy server for the phones which are unable to directly communicate with the CA. The CAPF server signs LSCs on behalf of CA. The IP phone checks the signed config file for CAPF status and authenticates with any of the 4 options:

Finally the phone initiates a TLS connection with the secure CME on TCP port 2443 if the device security mode settings in the .cnf.xml.sgn file are set to authenticated or encrypted.

10 Helpful
Share
Latest Contents
Finesse - few buttons are disappeared
Created by dhatchina120584 on 06-29-2022 02:56 PM
0
0
0
0
In Finesse agent desktop, End button and call duration timer are disappeared after exactly 15mins of Consult Transfer Call completion in agent B Agent A gets user callconsult transfer to Agent BConference Agent A, Agent B, user callTransfer user call... view more
How to update Cisco IP Communicator for 3k+?
Created by SubnetZero1 on 06-29-2022 02:26 PM
0
0
0
0
We would like to update 3000 Cisco IP Communicators to the newest version which is 8-6-6-25.  Currently, all staff has version 8-6-0. We want to make sure we keep the Device Name AND TFTP values after the upgrade. How can we do this wi... view more
InActive Agents and Reporting
Created by jboresta on 06-29-2022 01:48 PM
0
0
0
0
What is the recommended way to handle inactive agents ? If they remain in the database they will appear on Historical reports forever if the agent list is used in a left join as the starting point of a report query. However, as I understand it if they are... view more
Change caller ID number (ANI) when 911 is dialed?
Created by NewRobert on 06-29-2022 01:40 PM
2
0
2
0
Can I alter the caller ID number when a specific group of phones dial 911?
Multi-regional Expressway C & E implementation
Created by mohamed.abouzaenin on 06-29-2022 12:59 PM
0
0
0
0
Hi guy We have two cisco UC clusters , the first one have ( CUCM 12.5 , IMP , UNITY , EXPRESSWAY C & E ) all working with jaber MRA . The second cluster have  ( CUCM 12.5 , IMP , UNITY ) . both clusters for the same company and the same doma... view more
Ask a Question
Create
+ Discussion
+ Blog
+ Document
+ Video
+ Project Story
Find more resources
Discussions
Blogs
Events
Videos
Project Gallery
New Community Member Guide
Related support document topics