Cisco Unified Communication Manager is full of features and functionalists that can be implemented and employed to meet the business requirements for single site and multisite deployments. One of the most common used and deployed features in CUCM multisite deployments is the use of the local PSTN. with multisite deployment it is important the calls to PSTN use the local gateway and local PSTN as first exit point to those calls ( unless there is special requirements that need to route the call through a remote gateway), specially this approach is used to control billing and reduce the extra bandwidth's utilization over the IP WAN network between the sites.

before CUCM 7.x release the best way used to meet this requirement was the use of line/device approach to control the choice the local PSTN Gateway through the Device's CSS. Although this approach is very useful and successful, the implementation of line/device approach with big enterprise companies with many remote sties and branches will make it not very fixable as it will require alot of CSSs, partitions and Route pattrens to be created. In other words a full dial plan to be configured per site !.

CUCM 7.x and later has introduced a very useful and flexible feature that can be used to archive the same goal of line/device approach but with less complexity and with possibility of using one dial plan for all of the sites, this new feature called Local Route Group.

bellow is an example consist of CUCM deployment with two sites Site A and Site B, each of the Sites has its own local PSTN gateway and PSTN line.

with this example we will use a general pattern to represent a PSTN number which is 9.1!

when a caller from Site B call PSTN number with the above pattern the call has to try Site B PSTN gateway as first choice, same with Site A. 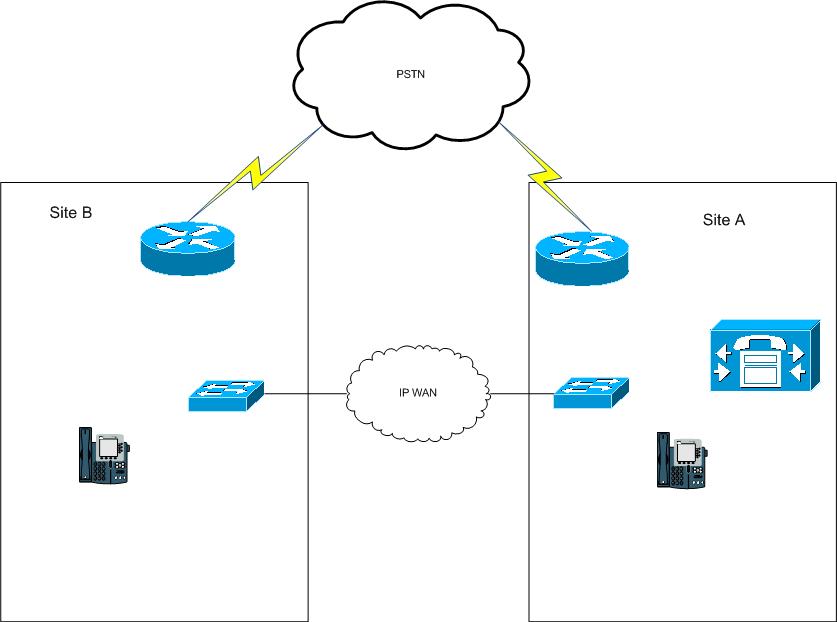 we create a route group for each site that contains the voice gateway of that site ( we could list the remote site Gateway as a second choice in the list for redundancy but this is optional and based on the design requirements as well ).

based on our example above we will have two route group one for Site A and the other for Site B.

then we assign this route list to the PSTN Route Pattern, this route pattern is assigned partition called PSTN_pt

in our example Device pool of site B need to be associated with the Site B Route group created above, and same procedure need to be done with Site A

the bellow chart will describe the logical call flow described above: 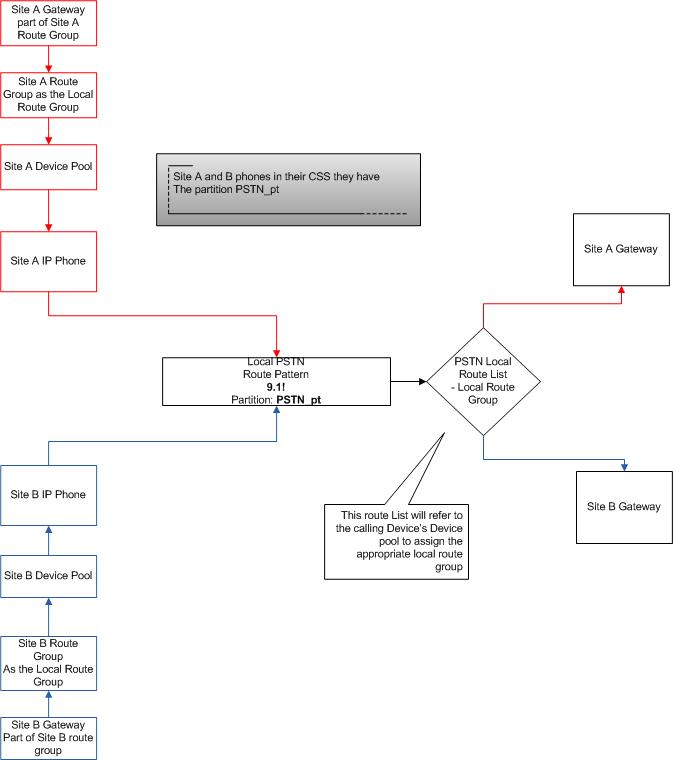 as we can see with one dial plan, one route pattern and one partition we were able to design a call routing for two differnt sites each of them uses its own local PSTN gateway

for more details about this interesting feature and other CUCM features refer to the excellent link bellow CUCM 7.x SRND:

So in this example, to provide PSTN redundancy for Site A phones calling the PSTN, the Route Group for site A would include the Site A and Site B voice gateways?

I use the ol' lock and key method: (which takes time, but I know it works)

on the Line CSS   LD_CSS

The phone can then dial LD, etc.   (of course I have local, INT, internal, etc)

Where I am confused is how it works or the changes that would occur to make local route groups work for restrictions of route patterns.   Who can dial LD or Local, etc.  Right now, I do it with CSS/PT/Route Patterns.  The Patterns in your CSS/PT, you can dial it.  If its not, you get reordered.

I know other enginers do the blocking method.  Block everything, but allow at the device level. (Extension mobility works better at the device clearly)

for blocking its just like with extension mobility, use line/device approach the device will use local route group for every thing like 0.@ to chose the desired gateway,  and in the line level you need to create specific route pattern with block and make the blocked route-pattern's partition part of the line's CSS

Beginner
Hi, so far, from my understanding, the only thing I need to do is to create one partition, one CSS and the route patterns. Here is my question, on my scenario, each site has its own PSTN access(like small CM). How do I set up the route pattern, so when the phone gets to that pattern, go to its own gateway?. I configure my route list, set it up with its own route group and set up the local route group. I have different gateways for each site and when try to configure the route pattern it always ask me to select the route list/gateway and I have diferent sites; so im afraid that I will get the same amout, but insteado of havind 2016 route patterns i will get 2016 route lists/groups. HELP PLZ!!!

With extension mobility, will site A user login to site B phone use Site A gateway for outgoing calls?

I have a scenario where the two independent business (BU - A and BU - B) Calls has to be routed to two different gateways (using 2 RP- RL-PT-CSS and 2 DP - RG combination), which is happening. Note that both are using the same Route Pattern combinations example : RP- 0!#

Is it possible to achieve this using SLRG and how to approach this.

Latest Contents
Community Live Event- Tour of the Real-Time Monitoring Tool
Created by Cisco Moderador on 03-04-2021 10:24 AM
0
0
0
0
Community Live- Tour of the Real-Time Monitoring Tool (Live event -  Tuesday, 20 April, 2021 at 10:00 am Pacific/ 1:00 pm Eastern / 7:00 pm Paris) This event will have place on Tuesday 20th, April 2021 at 10:00 hrs PDT   Register Today! Wha... view more
Unified Messaging to Different Domain
Created by noraneko_17 on 03-04-2021 10:07 AM
0
0
0
0
Organization has a department that uses our phones and is under our Unity server, but they use a different email server/domain.Us: user1@example.govThem: user2@example.comWe have our SMTP server to our domain and Unified Messaging services set on our Outl... view more
Restrict which users Help Desk Administrator can manage
Created by dbooth on 03-04-2021 09:10 AM
1
5
1
5
Is there any way to give a user the Help Desk Administrator role but restrict which users they can change PINs for? For example, if you wanted to give a helpdesk user the ability to change end user voicemail PINs but did not want them to be able to reset ... view more
UCCX Write Document Step in CCX Editor:
Created by philjaeger on 03-04-2021 08:32 AM
0
0
0
0
Does anyone know if it's possible to use the write document step to save a prompt on an external server/directory?   I want to record a prompt and have it stored and accessible on a remote server.  Use case:  Site managers call in... view more
Audio delay warning is poping up
Created by chandraprakashhdw135382 on 03-04-2021 05:30 AM
0
0
0
0
Hi Mates,My one of the clinet is getting warning messages which related to audio delay as mentioned in picture. The codec that we installed there in site is SX20.Can anyone please tell me how to resolve erase this warning message.RegardsChandra Prakash&nb... view more
CreatePlease login to create content
Discussion
Blog
Document
Project Story
Video
Related Content
Discussions
Blogs
Events
Videos
Project Gallery
Content for Community-Ad