Cisco Community
English
Register
Login
How do YOU and your teams use messaging in Webex? Let us know for a chance to win some Webex swag!
RegisterLogin
Turn on suggestions
Auto-suggest helps you quickly narrow down your search results by suggesting possible matches as you type.
Showing results for
Search instead for
Did you mean:
Announcements 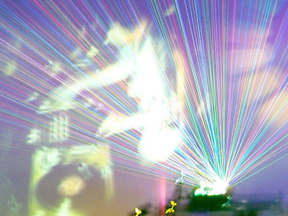 Upon moving to Unity Connection and single inbox, we no longer employ SMTP or MAPI to deliver messages to the Exchange message store and, instead, rely on a synchronization supplied with either WebDAV (if using Exchange 2003) or EWS (if using Exchange 2007/2010). Unity was previously all on Exchange but now messages are left on Unity Connection’s own mailbox database and synchronized to Exchange using the above HTTP request/response methods once Single Inbox (Unified Messaging) is configured.

The initial messages will arrive at the Exchange distribution list mailbox but will not be distributed to the members of that list. This is because the SMTP/MAPI attributes necessary for the second step of distributing to members are not included in the original message.

How to fix this:

So far, most cases are fixed by moving the distribution list functionality previously provided by Exchange over to the Unity Connection side. This is done by following these steps.

1) Create a distribution list on Connection. I made one here called “test1.” (Click on photo for clearer picture). 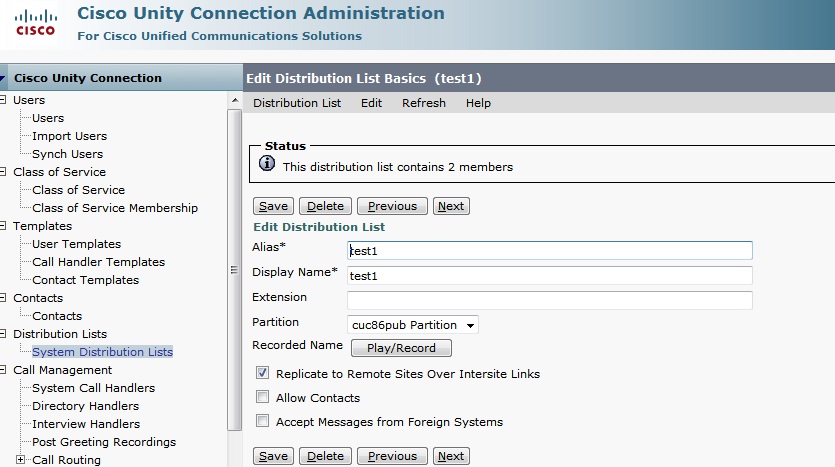 3) Create a call handler with an extension for people to call and leave messages intended for those on the distribution list. I created one called “dist list CH” and gave it an extension of 868686 here. (Click on photo for clearer picture). 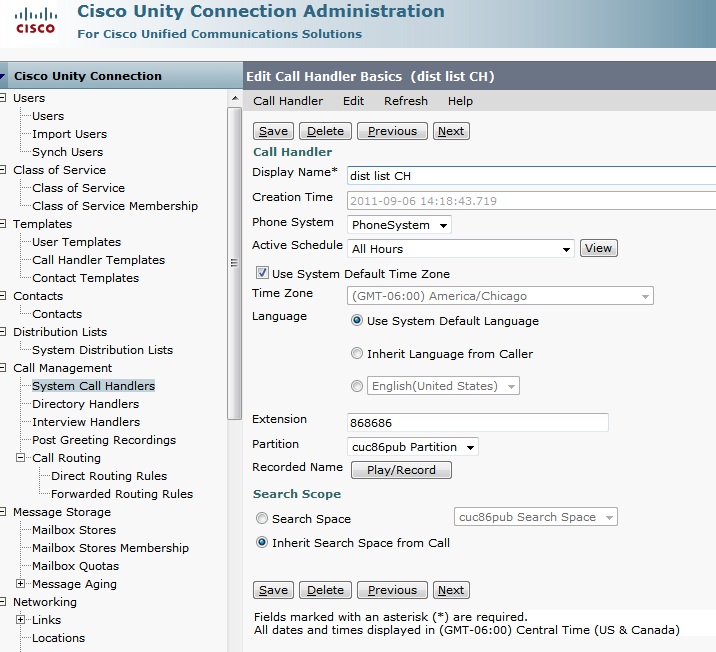 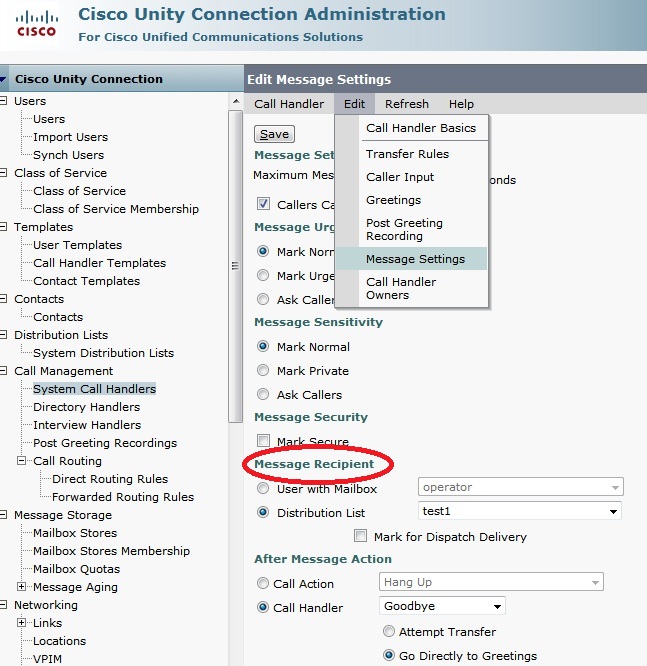 5) Test by calling the extension of the new distribution list call handler and leave a voicemail. Connection should deliver a copy of the message via WebDAV or EWS synchronization to each distribution member’s Exchange mailbox. The end result should be the same as when it was on Unity.

Latest Contents
Upgrading Expressways from X12.5.1 to 14.0.6
Created by carl_townshend on 06-27-2022 07:55 AM
0
0
0
0
Hi AllI wish to upgrade some Expressway Es and Cs from version 12.5.1 to 14.0.6. Are there any issues doing this?Can I go straight to that version?Will any of the configuration change?If any issues can I roll back? Many thanksCarl
How to configure two sip trunks
Created by dharmendra.bhavsar on 06-27-2022 02:23 AM
3
0
3
0
Hi Team,   I have two SIP Trunks to configure on One CUBE but the problem is the first SIP Trunk needs SIP Registration and the second one does not.  when I am placing call through second SIP Trunk the "From address" in Invite MSG from CUBE&nbsp... view more
Desk pro Type-c features not working on MAC book pro
Created by Soundar on 06-26-2022 12:52 AM
0
0
0
0
Hi I connected my Mac book pro to Desk pro device via type-c cable and facing below issue  Desk pro touch passthrough functionality not working MAC book not detect desk pro microphoneWhen try to increase & decrease the volume via m... view more
dial-peer
Created by kaso_baxtiar on 06-25-2022 01:22 AM
4
0
4
0
dears I have some conflict with the configuration I have in my voice gateway which is already configured and I want to review it and get the full understanding of what those commands referred to in the dial-peer configuration I have the following configur... view more
scripting skills ??
Created by Iluvteak on 06-24-2022 12:29 PM
5
0
5
0
I work with CUCM and keep seeing job requirements wanting 'scripting' experience.     I've asked a few people what they use scripting for in CUCM and nobody has a good answer.    FYI - my current team does no scripting so I don't ... view more
Ask a Question
Create
+ Discussion
+ Blog
+ Document
+ Video
+ Project Story
Find more resources
Discussions
Blogs
Documents
Events
Videos
Project Gallery
New Community Member Guide
Related support document topics