How to retrieve certificates from Cisco IP phones

Verify What Certificates Are Installed On The Phone All phones as of 79x1 and newer (including 69XX/89XX/99XX) come with a MIC installed from the factory.  LSCs must be manually installed on the phones by following the Communications Manager Security Guide section found here http://tools.cisco.com/squish/A5E5A.

Retreive The Certificates From The Phone

Go to the Cisco Unified Communications Manager (CUCM) Administration web page and navigate to Device > Phone.  Find and select the phone which the certificates are going to be retreived from.  Navigate to the "Certification Authority Proxy Function (CAPF) Information" section of the phone configuration page and set the CAPF Operation to "Troubleshoot".

Click save and reset the phone.  After the phone has reset and registers again, refresh the device configuration page to make sure the CAPF operation has completed.  This can be identified by checking that the CAPF operation has changed automatically back to "No Operation Pending" and the Certificate Operation Status displays "Troubleshoot Success".

The certificates have to be downloaded from the CUCM publisher using the command line.  The Real Time Monitoring Tool (RTMT) will not collect the certifiates.  To view the available certificates use the following command.

Use the following command to download all of the certificates.  The exact file name can be specified rather than SEP*.cer to download only certain files.  A Secure File Transport Protocol (SFTP) server is required to save the files to.

Since the phone had both a MIC and LSC installed there are two certificates.  The certificates have their attributes.

When the CAPF operation is not completing the first thing to check would be that the phone has the correct CTL and/or ITL files installed.  The CTL and ITL files contain the CAPF certificate.  This is how the phone authenticates the SSL/TLS handshake between CUCM's CAPF service and the phone to then perform the CAPF operation.  The easiest way to make sure the phone has the correct CTL or ITL is to simply delete the current CTL and/or ITL file so that the phone downloads a new one when it is reset next.

Note: A phone with both a CTL and an ITL file installed will use the CTL file's CAPF entry to authenticate the SSL connection to CAPF.

Another way to verify if the CTL or ITL on the phone match between the CUCM and phone is to run the "show ctl" command from the CUCM TFTP's command line.  Newer CUCM versions will display the MD5 of the CTL file in the output, while older CUCM versions do not.

If the "show ctl" output does not display the MD5 checksum (CSCto60209) download the CTLFile.tlv or ITLFile.tlv from the TFTP server and run an MD5 sum manually against the file.

The output of the MD5 can be matched against the display of the phone by pressing the Settings button and going to Security Configuration > Trust List. In this case both the values match so the phone has the correct CTL file installed.  If these values do not match, the CTL or ITL file would have to be manually deleted from the phone by entering **# to unlock the settings configuration followed by selecting the CTL or ITL file, selecting the unlock softkey, followed by the more softkey, and finally the erase softkey. 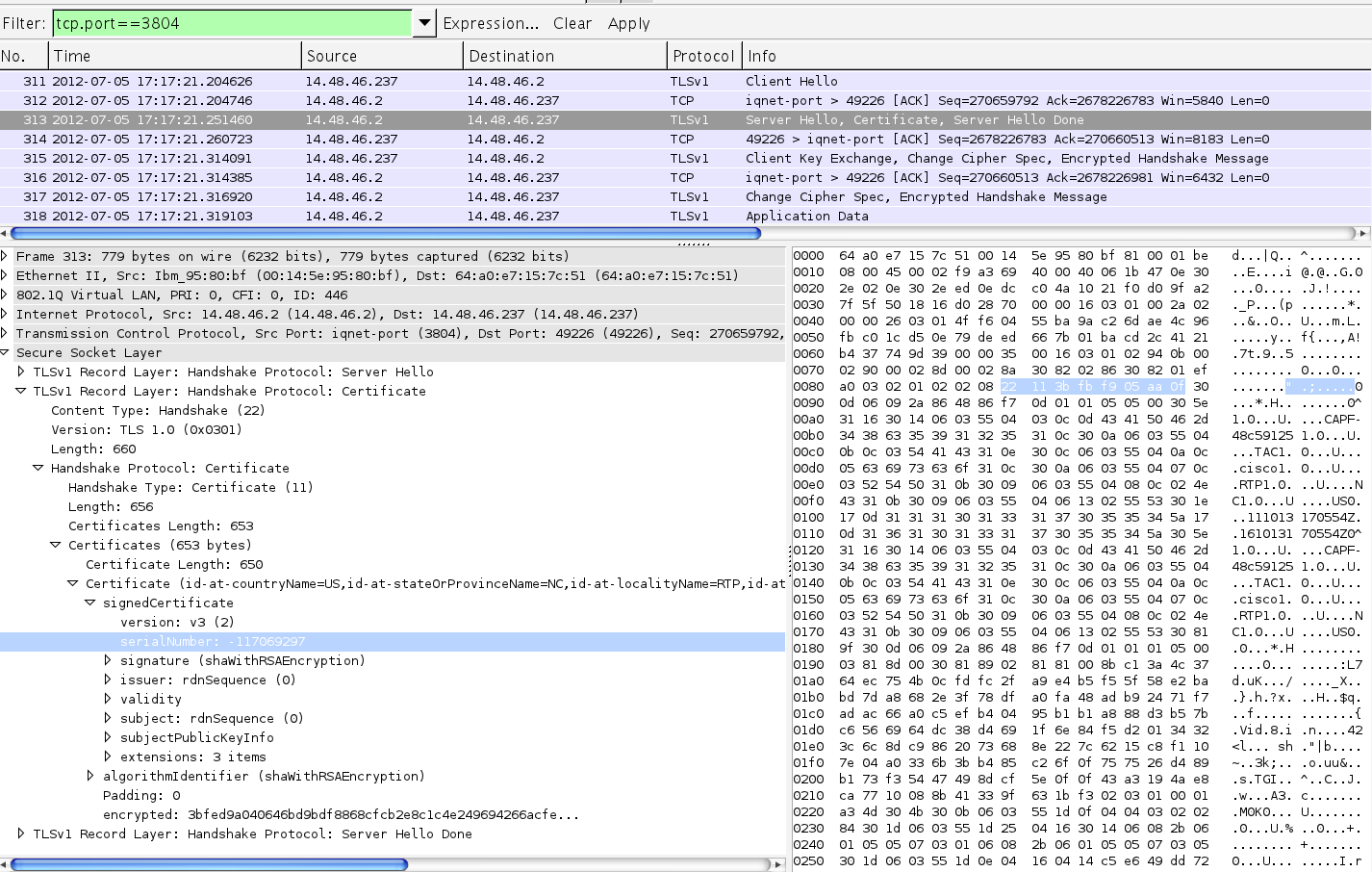 The serial number for the certificate can be matched up to the CLI output by looking at the packet bytes while selecting the serialNumber field.  The packet bytes show 22 11 3b fb f9 05 aa 0f which match the "show ctl" output below of 22:11:EB:FB:F9:05:AA:0F.

35 Helpful
Share
Latest Contents
Jabber global config preferred way to join Webex?
Created by shleets on 03-01-2021 07:53 AM
2
5
2
5
Hello - is there a global config parameter for Jabber that tells it to use WEBEX VS Jabber as the preferred way to join WEBEX under the meetings tab?  Our preference is WEBEX as Jabber does not have full feature functionality and want to provide this... view more
flex 3.0 expressway option
Created by soloo2014 on 03-01-2021 07:21 AM
2
0
2
0
hello alljust have a question about (flex 3.0 professional )  i know it includes voice mail for the named users but what about setting up expressway c & e , do i need any extra licenses or should i add the option for expressway RMS.the data sheet... view more
UCCX/Finesse agent chats error.
Created by skhnv on 03-01-2021 06:10 AM
0
0
0
0
Hi.Running into this issue with the chats shutting down error.Not sure why but it's happening quite often.Any help appreciated. Thanks.UCCX11.6.2.10000-38 (ES05-9)Finesse 11.6(2)
Agent Queue calls not showing while they are busy or not rea...
Created by jaheshkhan on 03-01-2021 05:41 AM
0
5
0
5
When agents are busy or not ready state , new external PSTN incoming calls are not showing in their finesse. For internal calls, its showing without any issue.Because of this, agents or supervisor is not knowing about the calls that are receiving to them ... view more
Does cisco meeting server provide remote desktop control
Created by YazanHuzayen98570 on 03-01-2021 02:29 AM
1
0
1
0
We are planning to install CMS in our environment and i need to confirm if a user  can share content and give or request desktop control for the other users, or its only content sharing?
CreatePlease login to create content
Discussion
Blog
Document
Project Story
Video
Related Content
Discussions
Blogs
Events
Videos
Project Gallery
Content for Community-Ad