This document covers the basics of implementing the PSTN Access Dial plan in Cisco IOS Gateway and the Call flow between the Cisco Unified Communications Manager (CUCM) and the Public Switched Telephone Network (PSTN).This document is intended to help the beginners to understand the basic concepts of PSTN access and call flow.

When you implement PSTN access in a multisite environment, you must perform digit manipulation, described in the following list, before the call is sent to the PSTN. Digit manipulation must be done in CUCM when you use an MGCP gateway. It can be performed either in CUCM or at the H.323 gateway when using an H.323 gateway.

1. Outgoing calls to the PSTN:

2. Incoming calls from the PSTN:

ANI or Calling Number Transformation: Transform ANI into the full number (considering type of number [TON]), and add the access code so that users can easily redial the number.

DNIS or Called Number Transformation: If DID is used, strip the office code, area code, and country code (if present) to get to the directory number. If DID is not used, route the call to an attendant, such as a receptionist or an interactive voice response (IVR) application.

Figure shows an example of digit manipulation performed for both incoming and outgoing PSTN Calls. 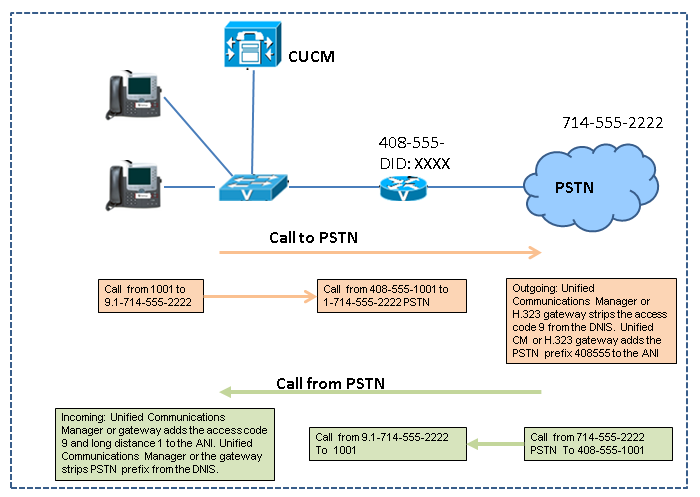 Its very clear and easy to understand.....love to see if you can make one for TEHO, Call Filtering...

Latest Contents
dial-peer
Created by kaso_baxtiar on 06-25-2022 01:22 AM
3
0
3
0
dears I have some conflict with the configuration I have in my voice gateway which is already configured and I want to review it and get the full understanding of what those commands referred to in the dial-peer configuration I have the following configur... view more
Cisco Meeting Server Clustering and Certificates document
Created by Meddane on 06-24-2022 04:11 PM
0
0
0
0
I just finished to write a comprehensive certificates preparation for Cisco Meeting Server Clustering. Through 60 pages I explained in detail, how to create certificates for database cluster, callbridge cluster, certificate chain for webbridge3, certifica... view more
scripting skills ??
Created by Iluvteak on 06-24-2022 12:29 PM
5
0
5
0
I work with CUCM and keep seeing job requirements wanting 'scripting' experience.     I've asked a few people what they use scripting for in CUCM and nobody has a good answer.    FYI - my current team does no scripting so I don't ... view more
Jabber placing call on hold - SIP question
Created by Iluvteak on 06-24-2022 11:58 AM
0
0
0
0
I noticed on a SIP trace that when Jabber is taking a call off hold that it sends 2 SIP re-INVITE's -- one with SDP and the second with no SDP.    Can someone explain why this is so ?       What is the purpose of the 2nd re-I... view more
Is there an app that can be downloaded for a work phone?
Created by sashatorrez on 06-24-2022 11:54 AM
3
0
3
0
Hello, Just curious if there is an app that can be download on an old iphone, (due to the office being away on a travel conference) and we dont want to be missing phone calls. Please let me knowIP Telephony and Phones
Ask a Question
Create
+ Discussion
+ Blog
+ Document
+ Video
+ Project Story
Find more resources
Discussions
Blogs
Events
Videos
Project Gallery
New Community Member Guide
Related support document topics