Message to visitors: this document is work in progress, will update in the coming weeks several times!

DECT stands for Digital Enhanced Cordless Telecommunications and is a standard for wireless voice services in buildings (domestic and business). Originated in Europe it was adopted across the globe. The US had a slight delay due to regulatory compliance but after some minor changes in frequencies used it was adopted in North America as well.

All base stations, DBS-210 (Multi Cell) and DBS-110 (Single Cell) have the same signal strength capacity.

Multi Cell DECT consists of base stations where the radio signals overlap, resulting in a network that supports seamless handover. As DECT uses Time Division Multiple Access (TDMA) and Frequency Division Multiple Access (FDMA) as a system to have 2 dimensions for transport on the physical layer (time and frequency). A Multi Cell base station has therefor a separate clock chip and syncs its clock signal either over the air or over a LAN.

When this requirement is met, and the base stations are in sync seamless handover between the different base stations is possible. Second benefit of Multi Cell installations is the added capacity of handsets as each base station in the Multi Cell can handle between 10-30 handsets with a limit of 1000 handsets in total for a Multi Cell.

Let’s first address the question: why not use Mobile instead of WLAN or DECT based VoIP?

Mobile networks become more and more pervasive yet have a couple of issues or challenges that need to be addressed.

First of all, the cost of a mobile (4G or upcoming 5G phones) and the durability of these handsets. Second the lack of or challenges faced when you need business phone features like conference calls, corporate directories, alarm buttons, centralized call control, etc. To overcome these challenges there are basically two wireless technologies that could address this: WLAN based mobile phones or DECT based mobile phones.

Voice services place stringent performance requirements on the entire network. Because digitized voice is a sampling of an analog signal (verbal communication), its transmission is very sensitive to delays during transit. In fact, in order for voice to work correctly over any infrastructure, the end- to-end transit time (cumulative time encoding the packet, leaving the sending client, traversing the network, and then being decoded at the receiving client) must be less than 150 ms. Issues encountered during transit result in imperfections in the reconstituted signal; also known as jitter. The jitter is basically the variation in delay that the system is experiencing.

Because a WLAN is based on a random-access protocol, and although it allows clients to roam freely, it is a shared medium among all wireless devices, with particular security protocols associated with it, adding voice services has implications in several areas, including:

DECT as a wireless voice solution was designed from the ground up to address these challenges and is way easier to design, deploy and secure. Coverage of DECT networks in office buildings, campuses and warehouse situations is excellent without the design challenges of a WLAN network. Voice clarity, roaming and overall quality relies on the base stations deployed in your setup without the interference from other endpoints in the 2.4GHz or 5GHz as DECT uses its own regulatory space. And last but not least the average talk/standby time exceeds that of mobile devices easily.

The main choice to be made is to select between Single Cell or Multi Cell setups. Extremely simplified: Do you need a high density of handsets (>10) or a very large area to cover, then the answer is Multi Cell (e.g. an entire office building, a warehouse). If the need is just a few phones and the area that need to be covered isn’t large then most likely Single Cell is the best choice. 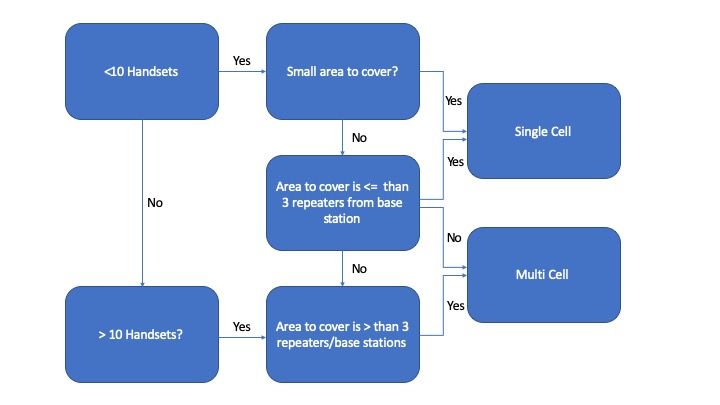 Small business that is expanding with 6 employees => Multi Cell as during the business expansion most likely a larger office will be used and employee count goes beyond 10.

Small size warehouse with 30 employees, only a few in the warehouse during a shift. => Single Cell with multiple Repeaters to get full coverage.

Large warehouse with 20 employees. => Multi Cell due to the large area and more than 10 handsets at the same time.

A multi cell setup with the Cisco DECT DBS-210 can be done in 2 ways:

Over the Air synchronization

Over the Air synchronization is the easiest way to synchronize and “only” requires that each base station can see its neighbors. Although this seems relatively simple there are a couple of challenges:

As the base stations need to keep their Frequency/Time channels in sync that means they need to see each other to get and keep in this state. 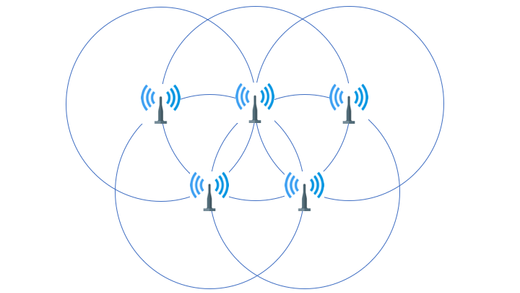 Using Lan synchronisation the overall distance between base stations can be improved while still maintaining seamless roaming. An added benefit is also the structural challenges can be easier overcome as interference from walls or other objects poise less of a challenge. Although this is the most scalable architecture it does rely on a proper designed switching network.

In old buildings sometimes due to building code or historic reasons running cables in a switched infrastructure might not be allowed. In those cases Radio Synchronisation might be the only viable solution. 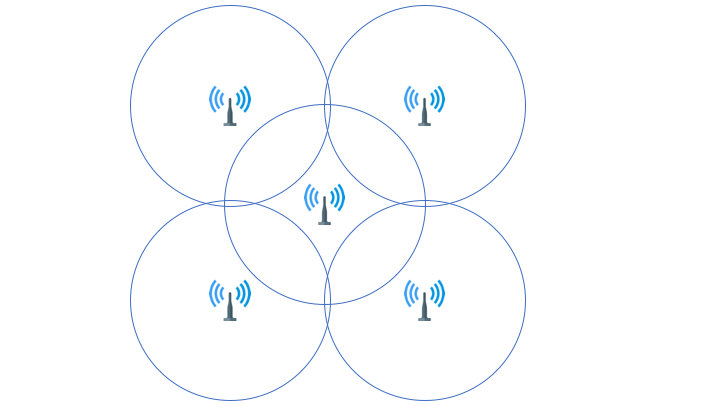 Before setting up your first base station

Set User and Password for this device profile in the authentication section (which can then be used in EDOS as a ZTP redirect). 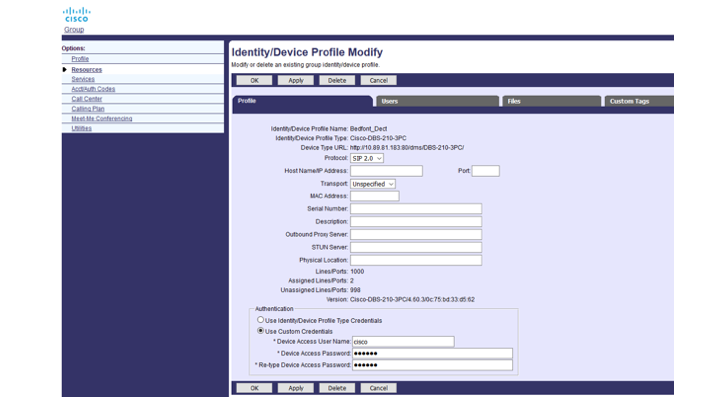 By default the DTAF creates a single xml file, %BWMACADDRESS%.xml with the MAC address being dynamically populated when bases reach DMS to pull the file. 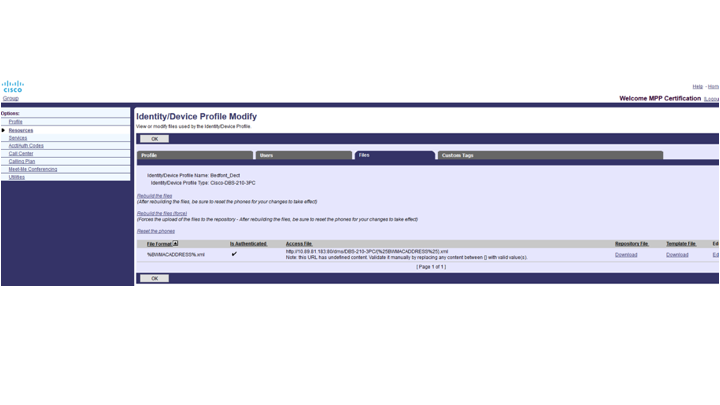 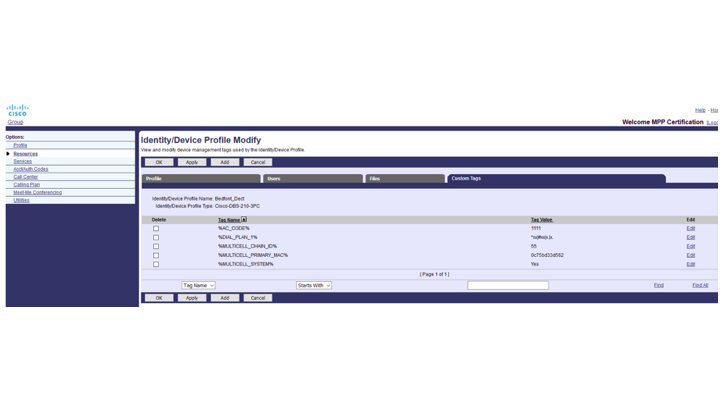 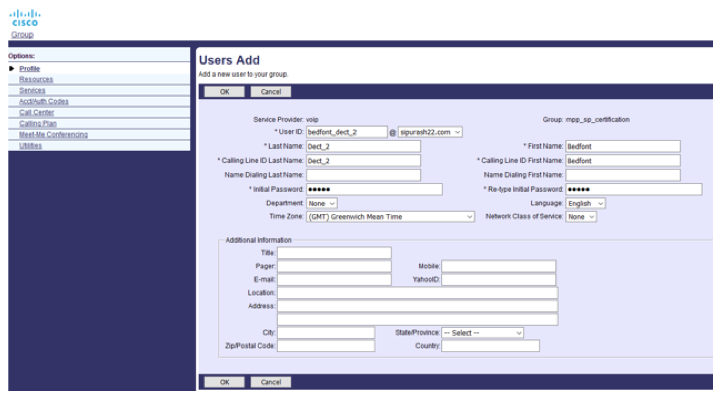 Go to profile of user 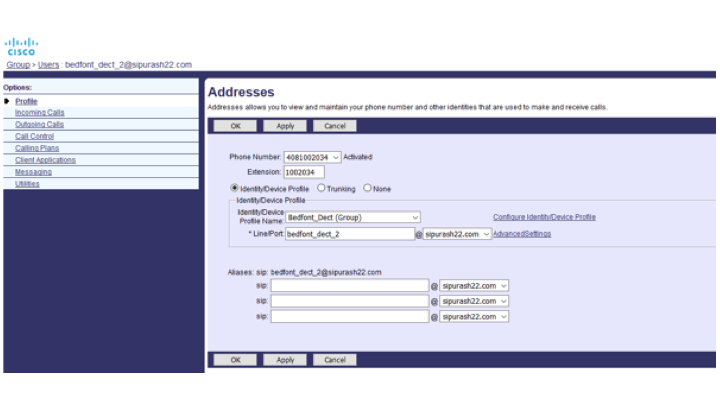 Rebuild files on device profile (pulls in the assigned addresses and creates extensions).

Assign a profile to EDOS (using the credentials set in the device profile of the multicell). Also including upgrade rules if necessary.

10 Helpful
Share
Latest Contents
UCCX Partila Service
Created by mightyking on 08-04-2021 07:16 PM
0
0
0
0
Hello Everyone,We have partial service in our HA UCCX cluster. In the Control  Center - Network Service, I can see the Prompt Manager is in partial serivce. I know this is probably because of a reference a script is making to a missing prompt but can... view more
Can Webex Teams be configured Only Use On-Prem IMP Server?
Created by Ahmed Abdulle on 08-04-2021 07:08 PM
0
5
0
5
Is it possible to use WebEx Teams app to use only the On-prem IMP Server for  Instant messaging and disable the WebEx cloud chatting feature?
CCX Upgrade question from 11.1 to 11.6.2
Created by BEG_Tal on 08-04-2021 04:59 PM
0
0
0
0
Hi TeamOur customer are using CUCM 10.5.2 and CCX 11.0.1 we want to upgrade their UC platform butwe would like to upgrade first of all CCX 11.6.2 and after that CUCM will be upgrade version 12.0 so my question is that CCX 11.6.2 is not orderable now and i... view more
Centralised call processing for multi-site deployment
Created by abhishek91 on 08-04-2021 03:16 PM
2
0
2
0
Hello Everyone,I have a specific requirement. Current IP telephony infrastructure resides at HQ with CUCM cluster at the center integrated with CU along with Cisco router acting as MGCP gateway for CUCM and termination point for PRI lines from provider. A... view more
Unusual Cisco 561 Headset Issue
Created by ZachOtt98645 on 08-04-2021 01:29 PM
0
0
0
0
I have a new Cisco 561 headset on version 2-2-001-3 that is exhibiting some odd issues. When connected it registers and associates to the Cisco 8811 phone. When trying to make calls the audio on the headphone is so low that you can barely hear it. I gave ... view more
Create ContentLogin to create content
Question or Discussion
Blog
Document
Project Story
Video
Related Content
Discussions
Blogs
Events
Videos
Project Gallery
Content for Community-Ad
Webex User Discussion Webex Beta Program How to Use the Community
NEW Webex Learning Catalog Help Center Share a Product Idea