Available with all VMware vSphere editions and independent of the type of VMware licensing scheme. The vSphere Standard Switch exists only on the host on which it is configured.

Available only with the Enterprise Plus Edition of VMware vSphere. The vSphere Distributed Switch acts as a single switch across all associated hosts on a datacenter and helps simplify manageability of the software virtual switch.

From the point of view of virtual connectivity, each virtual machine can connect to any one of the above virtual switches residing on a blade server. When using Cisco UCS B-Series blade servers, the blade servers physically connect to the rest of the network through a Fabric Extender in the UCS chassis to a UCS Fabric Interconnect Switch (for example, Cisco UCS 6100 or 6200 Series). The UCS Fabric Interconnect Switch is where the physical wiring connects to a customer's Ethernet LAN and FC SAN. As you can see from the following diagram as well 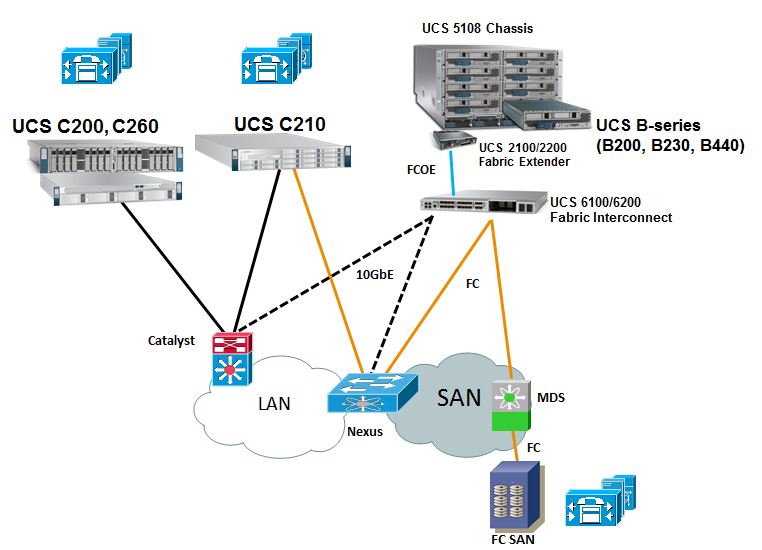 In a deployment with Cisco UCS B-Series blades servers and with Cisco Collaboration applications only, network congestion or an oversubscription scenario is unlikely because the UCS Fabric Interconnect Switch provides a high-capacity switching fabric, and the usable bandwidth per server blade far exceeds the maximum traffic requirements of a typical Collaboration application.

However, there might be scenarios where congestion could arise. For example, with a large number of B-Series blade servers and chassis, a large number of applications, and/or third-party applications requiring high network bandwidth, there is a potential for congestion on the different network elements of the UCS B-Series system (adapters, IO modules, Fabric Interconnects). In addition, FCoE traffic is sharing the same network elements as IP traffic, therefore applications performing a high amount of storage transfer would increase the utilization on the network elements and contribute to this potential congestion.

To address this potential congestion, QoS should be implemented.

Cisco UCS Fabric Interconnect Switches and adapters such as the Cisco VIC adapter perform QoS based on Layer 2 CoS values. Traffic types are classified by CoS value into QoS system classes that determine, for example, the minimum amount of bandwidth guaranteed and the packet drop policy to be used for each class. However, Cisco Collaboration applications perform QoS marking at Layer 3 only, not at the Layer 2. Hence there is a need for mapping the L3 values used by the UC applications to the L2 CoS values used by the Cisco UCS elements. 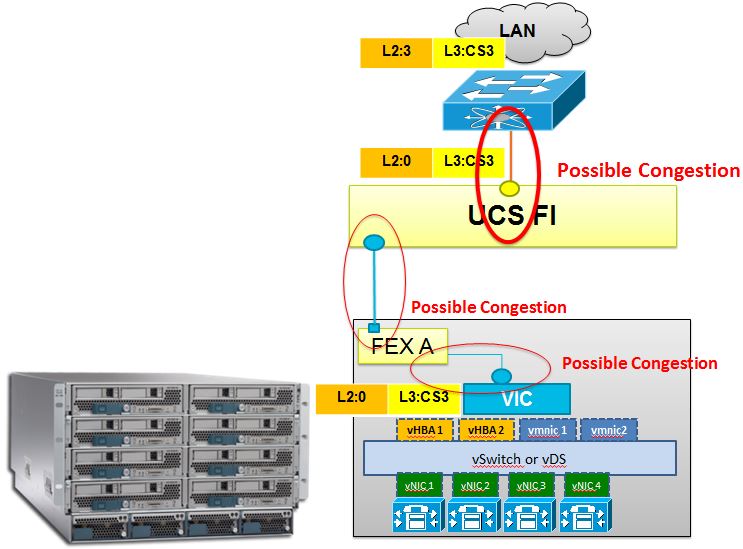 Only Cisco Nexus 1000V, which like the traditional Cisco NX-OS based switches, can perform this mapping. For example, the Nexus 1000V can map PHB EF (real-time media traffic) to CoS 5 and PHB CS3 (voice/video signaling traffic) to CoS 3.

For this and for many other reasons, N1kv is highly recommended for any virtual data center deployment and not just for UC applications.

UC Signaling and FCoE Traffic Are Using Same CoS 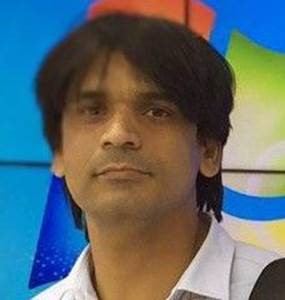 There is no Document attached?

Thanks for your comments. For some reason, the content was removed. I have republished it again with some bonus diagrams as well :-)

Latest Contents
Attendant Console Advanced 12
Created by Alberto Sanz on 08-02-2021 12:50 AM
0
0
0
0
Hi,we have upgraded to CUAC Advanced 12.0.5 and we have noted that in the clients disappeared the path in windows registry HLM\SOFTWARE\Wow6432Node\Arc Solutions I know that in the new version some features can be changes in the client instead o... view more
Cisco Meeting Server ordering and licensing
Created by masoodst123 on 08-01-2021 09:16 PM
3
0
3
0
Hi There,I want buy and deploy cisco meeting server to enable users have video conferences. anyone to help me regarding the ordering and what licenses do i need to purchase. Regards
Cisco 4000 Series (ISR) with Auto-Attendant Service (B-ACD)
Created by lisandro on 08-01-2021 02:48 PM
1
0
1
0
We currently have Cisco 1861 and 2911 routers that are H323 telephony gateways.We are purchasing the Cisco 4000 Series (ISR) to replace all of our 1861 and 2911 routers.Currently, those gateways have Automated Attendant Service (B-ACD) configured.My quest... view more
Cisco Webex Desk Pro and CMS
Created by MukarramMalik04732 on 08-01-2021 04:30 AM
0
5
0
5
Dear Team, I am having CMS in my network along with Expressway Core and Edge. My Cisco Webex Desk Pro device is registered with CUCM currently. Now I want to enable webex meeting on this end point. Please let me know how I can do that. &nbs... view more
Chat history disappeared or stuck in the loading (...) - Web...
Created by Shalid Kurunnan Chalil on 08-01-2021 01:00 AM
0
10
0
10
Hi,  Past few days the Webex app unable to load the chat history for myself and my users. but today morning i noticed that all my chat history disappeared and its looks like new window without any messages in any of the chat room (direct and spa... view more
Create ContentLogin to create content
Question or Discussion
Blog
Document
Project Story
Video
Related Content
Discussions
Blogs
Events
Videos
Project Gallery
Content for Community-Ad
Webex User Discussion Webex Beta Program How to Use the Community
NEW Webex Learning Catalog Help Center Share a Product Idea