Unity servers can be networked together and form a global directory which is further explained in the Networking guide (http://www.cisco.com/en/US/docs/voice_ip_comm/unity/8x/networking/guide/8xcunet010.html)

Potential Problems
If the digital network is not accurately represented on every Unity server in the environment, problems can and will eventually surface with tools that rely on digital networking such as the Global Subscriber Manager (GSM) and the License Pooling feature.

1.    When Global Subscriber Manager (GSM) is used to move users you may not have any resulting servers to move users to, or it may show incorrect/old/inactive servers in the tool.  This is because its reading  the data straight from the GlobalLocation database table which is inaccurate as a result of data synchronized in from Active Directory.
2.     When using the License Pooling feature between several Unity servers, user license counts may reflect incorrectly across servers.  This can cause Unity to stop answering due to license violations and restrict other administrative tasks such as adding new users, etc.  You will see “Corrupt license data excluded from pool” message in the Unity License Info Viewer tool under the Alerts. 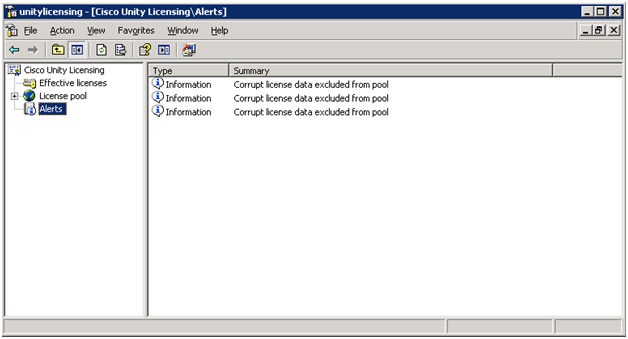 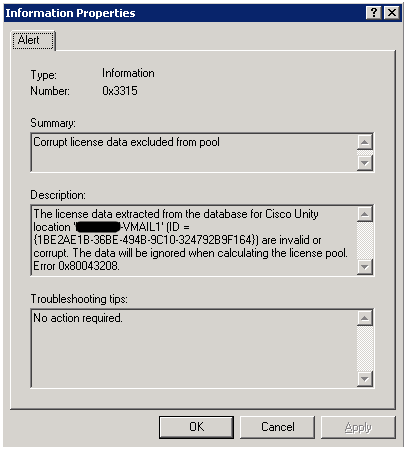 Each Unity server in the environment is assigned its own unique system ID upon installation.  This can be found in SQL.  The easiest way to find this system ID is from Unity Tools Depot>Diagnostic Tools>Data Link Explorer.  Scroll down to the UnitySetupParameters table and find the @SystemId row.  Here is an example of a Unity server’s system ID: 7588453f 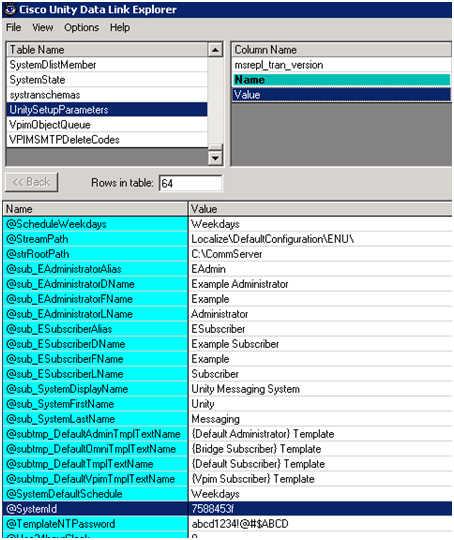 During installation, the Unity server creates the corresponding “location object” out in Active Directory.  This object contains crucial data that allows Unity to function properly.  You can view this location object by launching the Active Directory Users and Computers snap-in>Click View>Advanced Features. 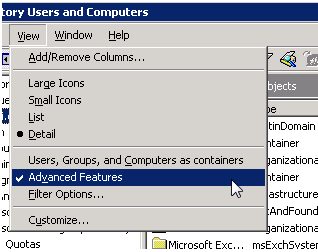 Clicking this option will expose the default Organizational Unit (OU) Unity>Locations, which contains all Unity server location objects (this location can be customized during installation by administrators so this can vary if you choose).  Here you'll see that the System ID’s all have the word “default” prepended.  In addition to Unity location objects, you'll also see delivery locations if you've got any configured (AMIS, VPIM, Bridge).  The defaultXXXXXXXX objects represent all Unity servers that currently exist, or once existed in the environment, or even from past upgrades.  The below screen shot shows a total of 3 Unity servers that exist with an AMIS delivery location configured named "AMIStest" which you can see belongs to the 2nd Unity server in that list since the System ID's match. 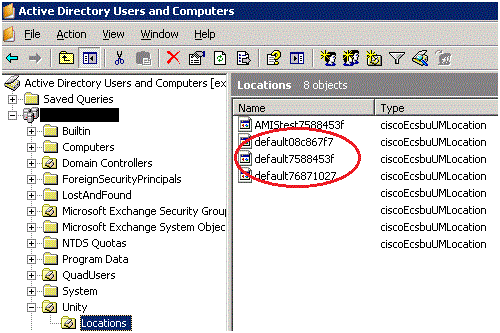 The most important thing to remember is that Unity’s GlobalLocation table should always accurately reflect the same amount of locations that exist in the Locations OU out in Active Directory.  When there starts to become an issue with location object descrepancies (due to past failed installs, upgrades or other problems) other aspects of Unity’s functionality will break.

Here’s the process to clean up the locations in both Active Directory and SQL.

1.    Visit the desktop of EACH Unity server in your environment and find its unique System ID using Data Link Explorer.  Unity Tools Depot>Diagnostic Tools>Data Link Explorer.  Scroll down to the UnitySetupParameters table and find the @SystemId value.
a.    If you have a failover pair, the secondary server shares the same System ID as the primary server.  When the failover configuration wizard was run to create the failover pair, it took care of this process.

2.    Once you have these System ID’s of all Unity servers documented, launch the Active Directory Users and Computers snap-in>Click View>Advanced Features and navigate to the OU that contains your Unity locations (Unity>Locations by default).

3.    Compare your System ID list with all of the defaultXXXXXXXX locations (where X= Unity’s SystemID)

At this point, you've made sure all Unity servers are accounted for in the environment.  If there are any unaccounted-for production Unity servers that you may not know about, deleting their location objects can break those servers’ functionality.

4.    Delete from Active Directory any extra location objects that don't match up with your total Unity server list from Step 1.  Once this is done, this change will need to replicate throughout all domain controllers so it may take a while before it’s fully replicated depending on the size of your environment.

5.    At this point AD is now clean so Unity will no longer sync in these stale/incorrect locations anymore.

a.    In Data Link Explorer within the GlobalLocation table, there is a checkbox “Undeletable”, the equivalent of value “1”.

b.    This field cannot be modified in Data Link Explorer since this tool is Read Only.  This field will need to be marked as a “0” in order to allow Unity to automatically purge these.  This has to be done in SQL Enterprise Manager manually. 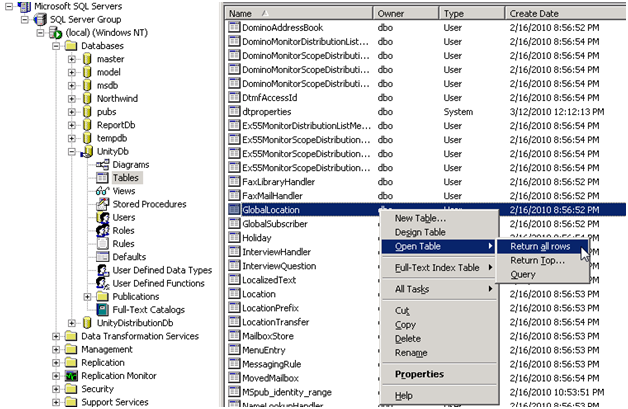 c. The column in the GlobalLocation table we're concerned with:

These changes require modification of the SQL database directly and can result in permanent failure if not done properly.

d. Change the 1 to a 0 for whatever locations need to be automatically purged

e. If the locations don't eventually purge themselves after a couple synchronization cycles, the full rows of the bad locations need to be deleted from the GlobalLocation table manually.  Just highlight the entire row and delete only once you've confirmed it’s the correct one(s):

Once both SQL and AD are cleaned up and location counts match, after a few synchronization cycles with Active Directory (Domain Controllers and Global Catalogs) the proper location objects will be updated and GSM will correct itself and license counts will re-align.  The “Alerts” section of the License Viewer will empty and no longer contain stale location messages.

Feel free to comment, rate and ask questions if you have any! 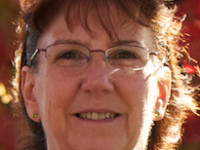 Very nice write-up and screenshots. I have dealt with this issue in the past and got it resolved without contacting TAC, but your doc would have helped a bunch!  Also, you alerted to having good synchronization with Active Directory, which in itself can be problematic at times, especially with Unity servers in multiple AD domains. As an administrator, I routinely monitored synchronization to ensure correct licensing and GlobalSubscriber information.  On several occasions, Unity selected a different DC than its GC and errors would result.  I became very familiar with monitoring using the DCGC Reconnect Tool.  Thank you for taking the time to create this valuable resource!

Latest Contents
CME Originator Caller ID not go through a transfer
Created by jeffkushner on 08-02-2021 04:08 PM
1
0
1
0
Hello,I have a CME running I believe 11.6. I have read the various forums and attempted to get the caller ID to go with a transfer, but it does not work. So outside caller A dials the main number, enters a persons extension, Phone B, that person sees the ... view more
CiscoJabberHeadset.exe constant CPU Usage
Created by TimNielsen on 08-02-2021 12:30 PM
0
0
0
0
Has anyone else noticed CiscoJabberHeadset.exe is constantly using CPU even when jabber is idle? I am seeing CPU usage anywhere between 2 and 10% when the system is idle, for only the CiscoJabberHeadset.exe process.
Notification Devices Default Hours
Created by Kyle DeLand on 08-02-2021 09:40 AM
0
0
0
0
We recently upgraded from Unity Connection 11.5 to 12.5. I'm used to having to manually add the user's email address to their notification device after I create their mailbox, but since the upgrade their notification schedules have all been blank and they... view more
CUCM - helpdesk privilege
Created by UsmanAkram1525 on 08-02-2021 09:29 AM
1
0
1
0
Dear Experts, I have configured the helpdesk user using RANK but I am facing one issue:After configuring user rank, the helpdesk user is not able to assign end-user in Users Associated with Line phone line setting.  for example, a... view more
UCCE 7.5 IVR Based Campaign SCCP Dialer
Created by cse_osama on 08-02-2021 07:20 AM
1
5
1
5
I will appreciate if some one can Share IVR Based Campaign SCCP Dialer configuration Step By Step
Create ContentLogin to create content
Question or Discussion
Blog
Document
Project Story
Video
Related Content
Discussions
Blogs
Events
Videos
Project Gallery
Content for Community-Ad
Webex User Discussion Webex Beta Program How to Use the Community
NEW Webex Learning Catalog Help Center Share a Product Idea