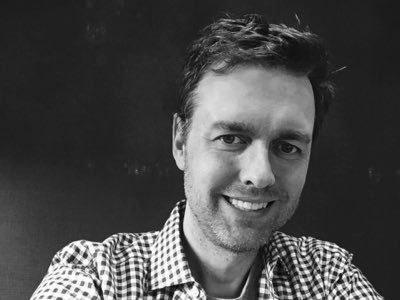 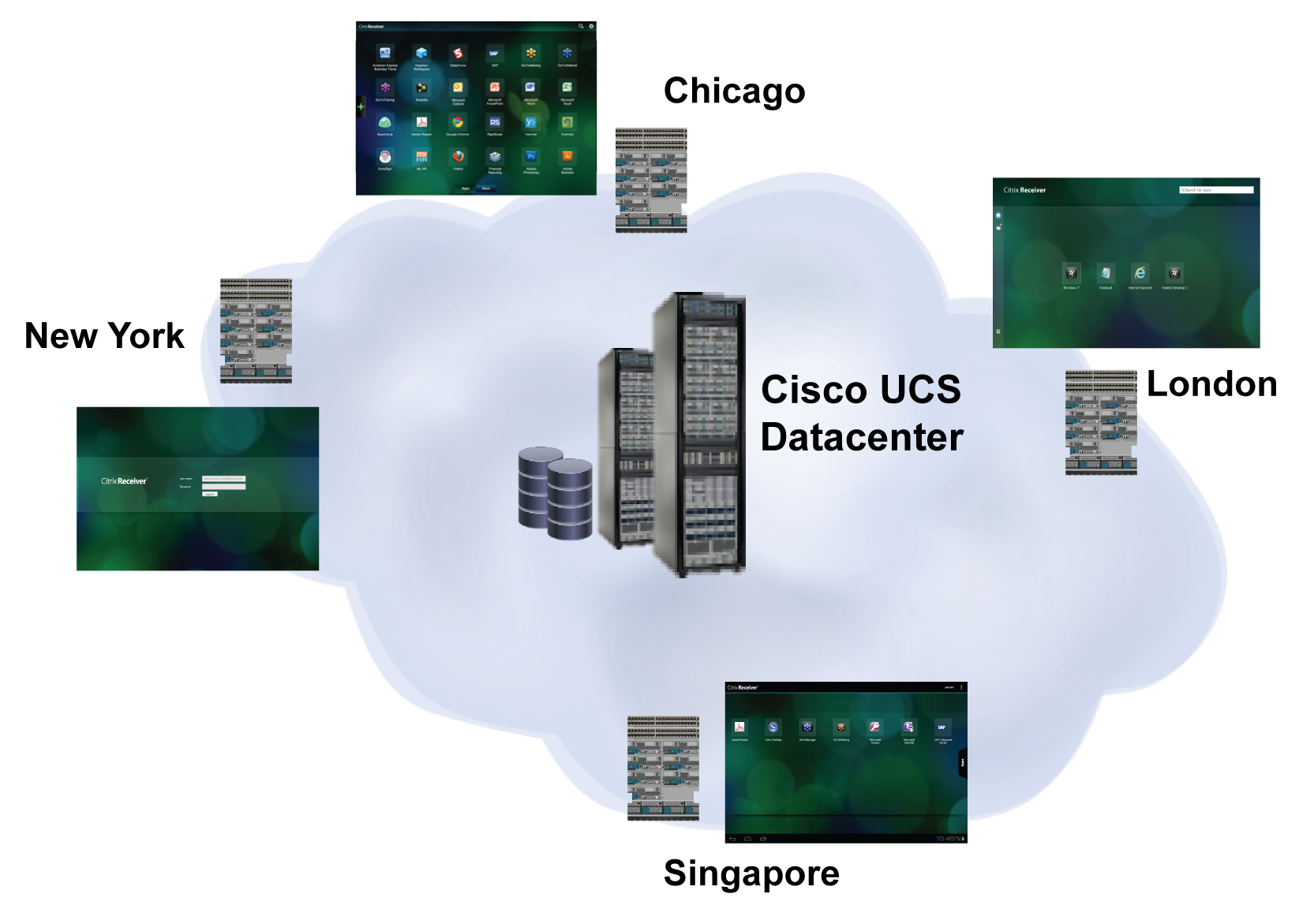 For companies that have geographically dispersed offices such as remote offices/branch offices (ROBOs) or other satellite locations, a turnkey solution for desktop virtualization can speed deployment at the enterprise edge. A new Cisco Validated Design (CVD) for Citrix XenApp and XenDesktop uses a predesigned, self-contained platform—the FlexPod Express with Cisco UCS Mini—that makes it easy to provision reliable desktops and applications from 350 to 700 users. The FlexPod Express, co-designed by Cisco and NetApp, integrates compute servers, networking fabric, and hybrid storage components, creating a standalone, drop-in VDI/SBC solution that can be installed at remote sites and yet managed centrally.

FlexPod Express with Cisco UCS Mini is the underlying building block that simplifies ROBO deployments while supporting density growth and proven mixes of XenApp and XenDesktop workloads. While FlexPod provides a cookie-cutter solution, this CVD demonstrates how a turnkey solution can also be quite versatile. Each deployment shares a common architecture, component design, configuration procedures, and management. At the same time configurations can scale and expand to accommodate greater user densities for hosted shared desktops (RDS) or hosted pooled virtual desktops (VDI). Every ROBO deployment follows the same architectural design but scales to facilitate site-specific RDS/VDI combinations. This excellent scalability can also benefit small and mid-sized businesses—they can start small and grow from 350 to as many as 700 users.

The CVD describes a base 4-blade FlexPod with Cisco UCS Mini configuration supporting 350 users (150 RDS and 200 VDI users). Cisco UCS B200 M4 Blade Servers were added to the base configuration to support workload expansion and larger densities. All configurations followed a fault-tolerant N+1 design for infrastructure and RDS/VDI VMs. To size and validate workload combinations, we conducted single and multiple blade server scalability tests using Login VSI software. The complete FlexPod CVD documents the step-by-step procedures used to create the test environment and includes all of the test results, which are highlighted here. 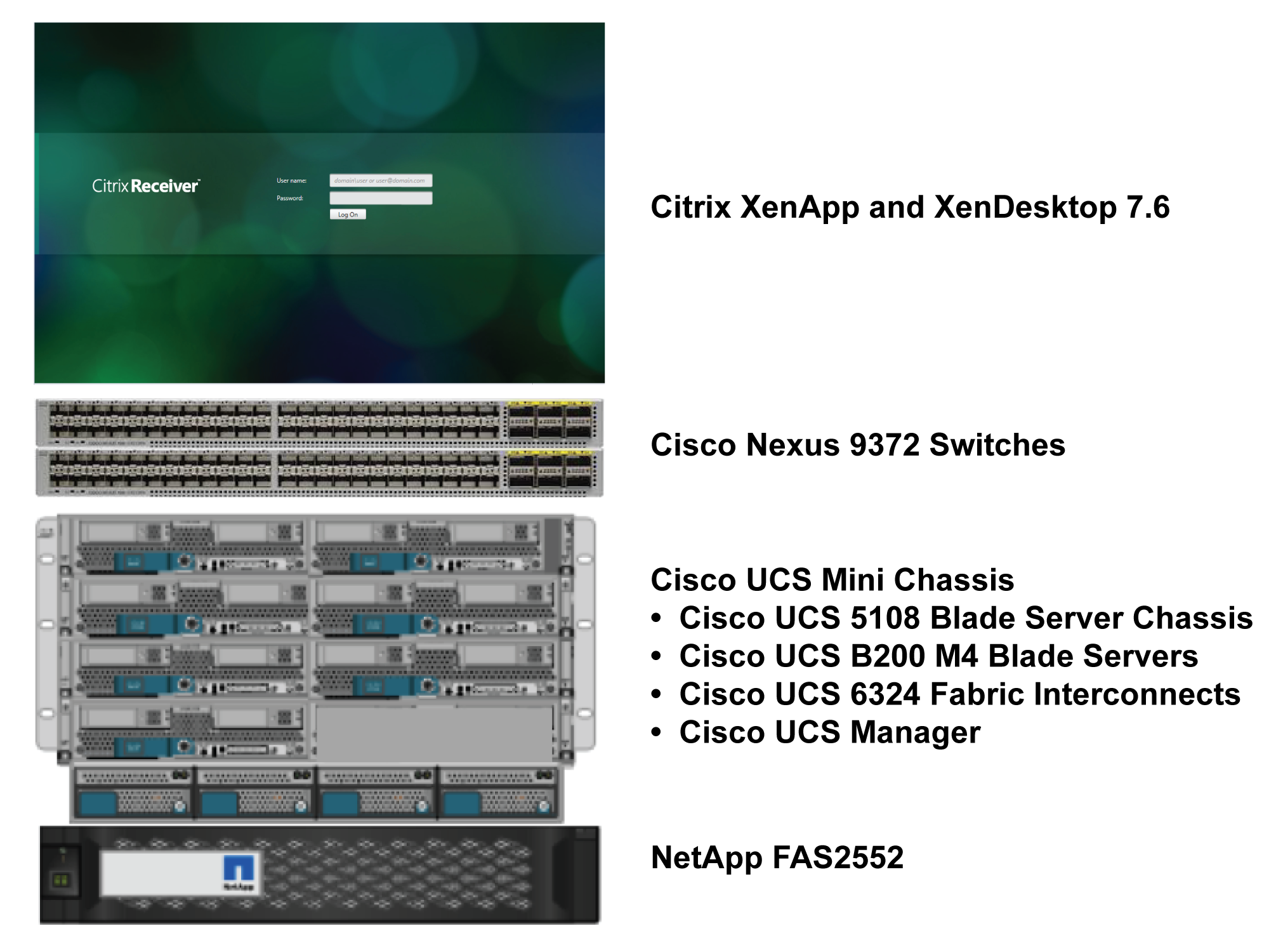 Figure 1 shows the key components in the CVD reference architecture, including:

Test metrics were gathered from the hypervisor, virtual desktop, storage, and load generation software to assess the overall success of an individual test cycle. Each test cycle was not considered passing unless all of the planned test users completed the ramp-up and steady state phases within the required timeframes and all metrics were within permissible thresholds. Three test runs were conducted for each test case to confirm that the results were relatively consistent.

For the multiple server scalability tests, multiple workload and infrastructure VMs were hosted across more than one physical blade. Configuring N+1 servers as shown enables a highly available yet cost-effective configuration for smaller deployment sites.

Table 1 shows the VM definitions used for the RDS and VDI workload servers. We first tested different virtual CPU (vCPU) configurations, finding that the best performance was achieved when not overcommitting CPU resources. Optimal performance was observed when each RDS VM was configured with five vCPUs and 24GB RAM, and each VDI VM was configured with 2 vCPUs and 1.5GB RAM.

This CVD used Citrix Provisioning Server 7.6. When planning a PVS deployment, design decisions need to be made regarding PVS vDisk and PVS write cache placement. In this CVD, the PVS write cache was located on RAM with overflow to disk (NFS storage volumes), reducing the number of IOPS to storage. PVS vDisks were hosted using CIFS/SMB3 via NetApp, allowing the same vDisk to be shared among multiple PVS servers while providing resilience in the event of storage node failover.

Figure 3 summarizes the five test cases and the maximum RDS and VDI user densities achieved in each.  The first two test cases examined single server scalability for RDS and VDI respectively, determining the recommended maximum density for each workload type on a Cisco UCS B200 M4 blade with dual Intel® E5-2660 v3 processors and 256GB of RAM. The other three tests analyzed the performance of mixed workloads on multiple blade servers. Multiple blade testing showed that the configurations could support mixed workload densities under simulated stress conditions (cold-start boot and simulated login storms). 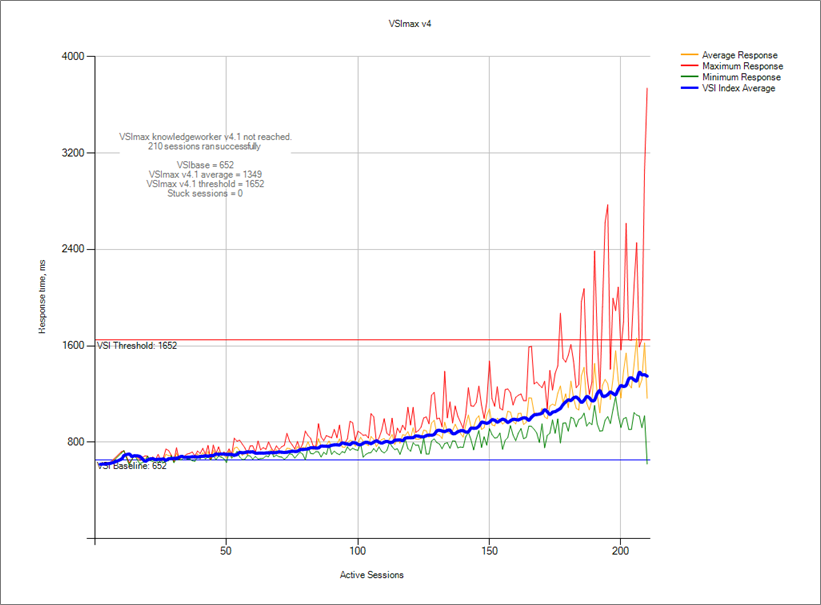 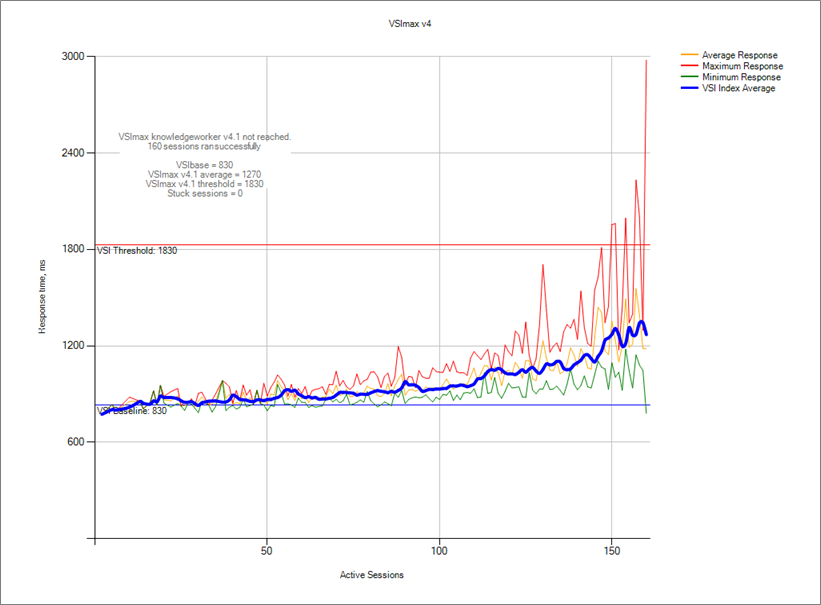 In this full-scale test case, 4 blade servers were used to support a mixed RDS/VDI workload in which N+1 infrastructure and workload servers were configured for fault tolerance. The 4-server configuration supported 150 RDS sessions on Windows Server 2012 and 200 Windows 7 VDI users. The graphs below show the VSIMax v4.1 results for the 4-server mixed workload and total storage IOPS and latencies. 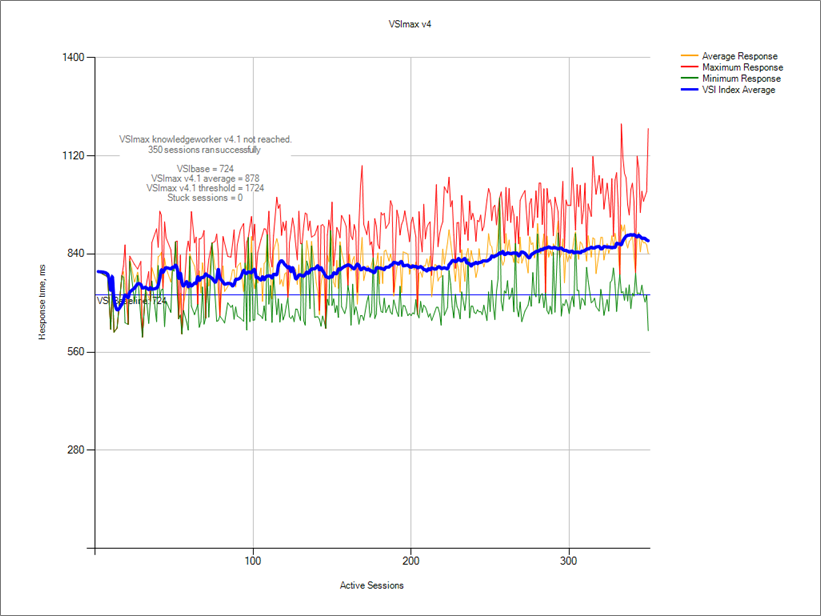 To validate an environment that requires a larger number of RDS seats, six Cisco UCS B200 M4 blade servers were used to support a 700-seat workload: 460 RDS sessions and 240 VDI users. Again, N+1 infrastructure and workload servers were configured for fault tolerance. The graphs below show the VSIMax v4.1 results for the 6-server mixed workload and the total storage IOPS and latencies. 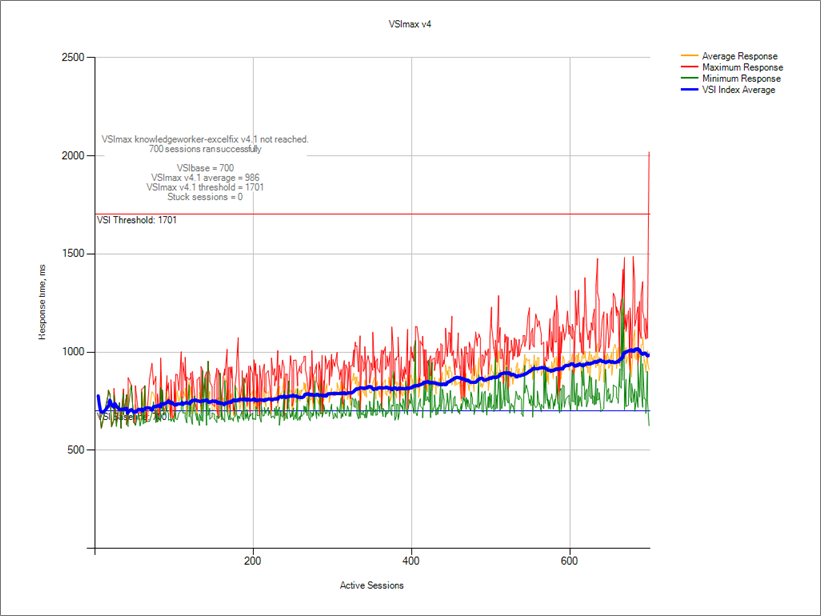 By expanding the base configuration to seven blade servers, the final test validated a mixed 700-seat deployment that was predominately VDI. In this test case, the N+1 configuration supported 150 RDS sessions and 550 VDI users. The graphs below show the VSIMax v4.1 results for the VDI expansion workload and the total storage IOPS and latencies during the test window. 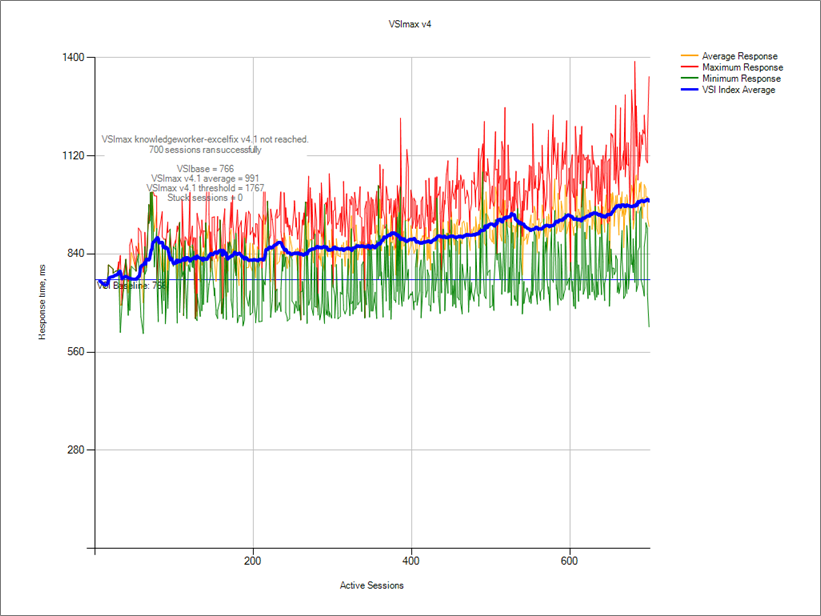 In the multiple blade test cases, the NetApp storage easily handled IOPS requirements for the 350 and 700-user workloads with average read and write latencies less than 5ms. Flash drives in the hybrid storage configuration helped to decrease latencies during the boot and login phases. During steady state, the storage experienced low IOPS, especially since the PVS write cache was configured to use RAM with overflow to storage, which decreased IOPS demands.

To see the full set of test results and learn more, you can access the full CVD here.

Latest Contents
DHCP Configure in ACI
Created by Ahmed Ashfaque on 05-11-2021 03:12 PM
1
0
1
0
Good Day All,How to configure DHCP in fabric ACI so that EP may get IP from this scope configure in fabric.Many thanks  & Regards,
vPC Switch Failure, auto-recovery Behavior
Created by mfarrenkopf on 05-11-2021 12:25 PM
0
5
0
5
Nexus 93180YC running 7.0(3)I4(2).  That we need to upgrade notwithstanding, I think what we experienced is a misunderstanding of our understanding of the auto-recovery concept.  We had a hardware failure of the primary vPC switch.  It was ... view more
Can´t access CIMC KVM
Created by Fernando Hernández on 05-11-2021 10:37 AM
0
0
0
0
Hello guys.Have you guys had problems accessing the KVM of the APIC CIMC? I want to start the KVM to upgrade CIMC, but I get the error that the client was disconnected due a network error and won´t open.I have even tried being on the same subnet as the CI... view more
ACI - Subnet options Bridge Domain and EPG
Created by jmaurer101 on 05-11-2021 06:07 AM
1
0
1
0
There are 2 places to put subnets inside the ACI model Bridge Domain and EPG. What are the differences of placing them in each section?  Tenant / TN-Name / Application Profiles / APP_Profile-ID / Subnets and  Tenant / TN-Name / Ne... view more
Supervisor crashing and rebooting
Created by Racso on 05-10-2021 11:02 AM
0
0
0
0
Greetings,So we have two Nexus 7009 that are brand new and should go to production soon. We updated them to the version 8.4.2 and we have now noticed that we are receiving this alarm on both devices Nexus01:2021 Apr 26 23:59:29 GUA-N7K-ADM1 %SYSMGR-S... view more
Create ContentLogin to create content
Question or Discussion
Blog
Document
Project Story
Video
Related Content
Discussions
Blogs
Documents
Events
Videos
Project Gallery
Content for Community-Ad