Chalk Talk: The Top 5 Differences between Physical and Virtual Networking

With the ingenious creation of the Virtual Switch (or simply,  vSwitch) at the beginning of the 2000s, VMware has introduced a new  field of networking whose main responsibility is to handle virtual  machine traffic within the realms of a hypervisor. Like any  virtualization technology, virtual networking sustains the illusion of  network devices with relative transparency while leveraging several  processes from more than 30 years of networking history.

As server virtualization quickly dominated most data  centers in the subsequent years, network professionals were introduced  to virtual switches through its similarities with physical devices. But  contrarily to The Matrix´s Neo, these technicians are usually required  to swallow both blue (virtual) and red (physical) pills. And even with  physical and virtual networks being brought closer to each other with  the Cisco Nexus 1000V, I have seen many experienced network admins  struggling to apply best-known practices from one world to another.

In  my book, “Data Center Virtualization Fundamentals”, I have demonstrated  how understanding the distinctions between virtual and physical  elements can help unlock the potential of a virtualization technique in a  Data Center. Following this method, this article will detail five  conceptual differences between physical and virtual networking that can  help you to better design and support server virtualization  environments.

This  distinction is further detailed in Figure 1, which compares physical  and virtual server migrations happening between modules on a chassis  switch and on Nexus 1000V.

A  physical server migration can be thought as the disconnection of a  server NIC from an interface on a chassis switch and reconnection on  another module of the same switch (for example, from interface Ethernet  1/3 to Ethernet 11/45 on a Nexus 7018). In this case, to maintain  connectivity and access policy enforcement, the network admin must configure the new interface with the same parameters from the previous port.

Nevertheless,  on a VM online migration (also known as vMotion), the network access  policy is linked to the vnic, wherever it may roam. Therefore, when a  machine is changing hosts (and consequently, Virtual Ethernet Modules  [VEMs] on a Nexus 1000V virtual chassis), no manual configuration is  required from a network administration perspective. Actually, to  facilitate the monitoring of VM traffic, Nexus 1000V assigns the same interface identifier (vEthernet25, for example) to the newly provisioned virtual interface in the destination VEM.

Without  a doubt, this characteristic greatly reduces the amount of work that is  expected from someone who is controlling thousands of access interfaces  for virtual machines.

A  virtual switch such as Nexus 1000V does not require MAC address  learning in virtual Ethernet interfaces. In fact, because of the  management connection between Nexus 1000V and VM managers (such as  VMware vCenter and Microsoft SCVMM), Nexus 1000V uses the addresses  assigned by the VM manager in the VM creation to populate its MAC  address table. 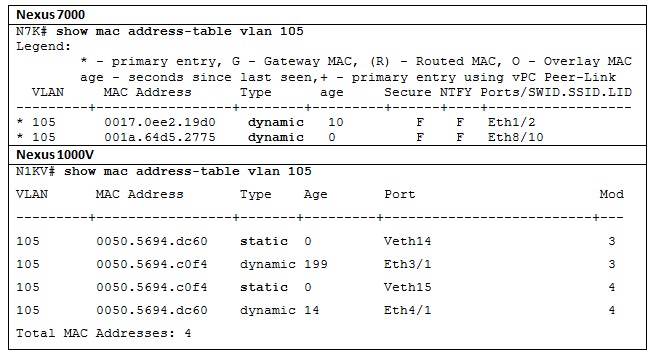 Both  command outputs show how each switch detects two servers connected to  different modules. While the physical switch (N7K) learns the MAC  address through traffic sent by the servers to interfaces Ethernet1/2  and 8/10, N1KV assigns a static entry for each VM in its corresponding  module.

Table 1 depicts yet another difference between  both devices: in Nexus 1000V, each VEM truly acts as an independent  switch. As you can see, VEM 3 has dynamically learned MAC address  0050.5694.c0f4 (from the VM connected to VEM 4) through the uplink  interface Ethernet 3/1 (which is connected to a physical NIC). That fact  explains why each MAC address appears twice in the MAC Address Table.

To  avoid loops, virtual switches such as Nexus 1000V do not have to rely  on the most vilified protocol of all times. Deploying a behavior called end-host mode,  Ethernet loops are simply not possible in these switches because  internal (virtual) and external interfaces are handled differently.

Figure  2 demonstrates end-host mode exploring how a VEM reacts to STP Bridge  Protocol Data Unit (BDPU) and to Ethernet frames that could potentially  cause loops.

In the figure, the VEM:

Note: As the most astute readers may observe, End-Host Mode also defines the  default forwarding behavior of the UCS Fabric Interconnect, displaying  how entangled the development of physical and virtual network have  become in the last years.

A  great part of the conceptual changes proposed by software-defined  networking (SDN) evangelists are not completely new. Actually, one of  the many SDN flavors (control and data plane separation) is already part  of Nexus 1000V architecture since its first release in 2009.

In  this switch, the VSM pair represents the control plane while the VEMs  embody the forwarding plane. Such characteristic allows a single Nexus  1000V instance to span multiple data center sites and still maintain the  illusion of a single network device. In addition, its privileged  central position allows a better orchestration of resources and  configuration.

Generically  speaking, VLANs offer a nice model for the separation of security  domains within a physical network. Through the isolation of  multi-destination traffic (broadcast and floods), two physical hosts  connected to different VLANs depend on other network functions, such as  routing, to communicate.

While they are adequate for  most data center environments, VLANs present the following limitations  against the high scalability of server virtualization environments:

To overcome these challenges, Cisco, VMware and other manufacturers have developed a technology called Virtual eXtensible LAN (or simply VXLAN), which was submitted to IETF as a draft in 2010 (http://tools.ietf.org/html/draft-mahalingam-dutt-dcops-vxlan-00).  In summary, this technology allows that two different VMs exchange  Ethernet frames through the dynamic encapsulation of these frames into  UDP datagrams marked with 24-bit VXLAN segment identifiers.

Nexus 1000V currently deploys VXLAN according to the Figure 3.

In  Figure 3, two VEMs share two VXLAN segments (50000 and 60000). For VMs A  and B, VEM West performs transparent bridging exactly like it would for  a VLAN. Differences arise when hosts from the same VXLAN are connected  to different VEMs. In this case, frames are encapsulated into UDP  datagrams (VXLAN packets) before they are sent to the remote VEM and  VXLAN multidestination traffic  is handled via a multicast group.

Note:   With NX-OS version 2.2, Nexus 1000V can deploy VXLAN using unicast  traffic only. Nonetheless, this model requires that all VEMs sharing a  VXLAN segment must be controlled by the same VSM pair.

Yes,  I know what you may be thinking. However, even though VXLAN and OTV  might share some similarities such as UDP encapsulation and the choice  between unicast and multicast, they exhibit important differences that  are represented on table 2.

As  you can infer, both technologies can be used simultaneously in a single  environment. Imagine, for example, a data center that is creating  multiple VXLAN segments to work as broadcast domains for VMs from a  different tenants (each tenant consumes a VXLAN). In this case, while  the VMs would use VXLAN to communicate among themselves, OTV could be  used to:

I hope this article has been useful for you.

This article is featured in the July 2013 issue of the  Cisco TS Newsletter.  Are you subscribed?

Latest Contents
REST API Huge Dataset
Created by ecsnnsls on 04-16-2021 04:12 AM
0
0
0
0
I am trying to download all v6 routes from the fabric along with the nexthop. I used the following URL to retrieve the v6 routesapi/class/uribv6Route.xml?rsp-subtree=full&query-target-filter=wcard(uribv6Route.dn,"<vrfName") and I got this <error... view more
Backup L2 link to legacy network
Created by brlehigh on 04-15-2021 12:11 PM
1
5
1
5
Greetings,Let's say I have the following network topology.  There is currently L2 connectivity to the legacy VSS switch pair via a VPC.  On the VSS side; the port-channel is configured as "spanning-tree link-type shared": I would like to ad... view more
Configuring NetFlow on a layer2 link between two DCs
Created by NetMonkey on 04-15-2021 03:33 AM
1
0
1
0
We have intersite link between two pairs of Cisco Nexus 5672 in our DC. We need your guidance to confirm is it possible to apply netflow and export it to solarwinds on that layer2 link so that we can see what data is traversing on this layer 2 link and wh... view more
DCNM upgrade from Windows 11.3(1) to 11.5(1) bat files
Created by itadminHB on 04-14-2021 06:38 PM
0
0
0
0
after the seeing the CSCvs78207 advisory we need to upgrade from 11.3 to 11.5 We current run it on Windows server 2016 I have read through the upgrade document and it talks about having to reindex the PMDB by using the  ReindexAlarmsCu... view more
Difference between Destination Type: EPG/Access Interface on...
Created by Fernando Hernández on 04-14-2021 09:03 AM
3
0
3
0
Hello guys.I was wondering if someone could help me to understand better what is the use case for the EPG Destination Type when you are configuring an Span Destination Group on ACI.I dont have it clear and also the source IP/Prefix should it be any addres... view more
Create ContentLogin to create content
Question or Discussion
Blog
Document
Project Story
Video
Related Content
Discussions
Blogs
Documents
Events
Videos
Project Gallery
Content for Community-Ad