Cisco Firepower firewall ports are not conecting to Nexus 9500

We want to move these firewalls to Nexus 9500s.

When we connected ASA ports to Nexus, the ports on nexus showed "connected" but the ports on the firewall appeared down.  Bouncing ports on either side did not help.  Taking ports out of port-channels and bouncing them did not help either.  Rebooted the standby firewall to see if its ports connect, but it did not work.

Opened a case with Cisco.  They checked the nexus side and the firewall side, but did not find any misconfigurations or issues.

Here is a list of troubleshooting steps I completed today, but nothing worked.

Error on nexus side:

I attached a diagram example of one firewall and it's two ports being connected to both nexuses.  I am currently working on troubleshooting connectivity of two firewall ports (standby firewall) to two nexuses. 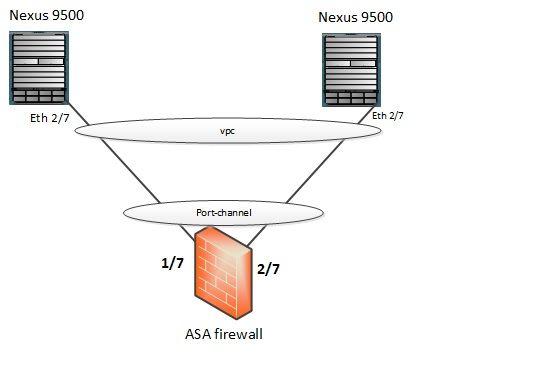 I am experiencing the exact same issue but the devices are two Nexus 56128P in VPC and Checkpoint 3100 with 1G fiber uplinks between them. The identical problem. TAC and CP did not find any issue either. I suppose it must be something to do with the L2 ASIC but that would not make sense because it actually works with other devices. If anybody had experienced something like that please give a hand.

I found a solution. When I disabled DTP it worked fine the interfaces and the vPC came up.

Thank you, Martin.  I'm very glad that it worked for your environment.

We finally got a chance to try this last night (among other things) but nothing worked. Setting a N9K port duplex to full and setting speed to 1000 did not work either.

We sent "show tech" file to Cisco again.  Waiting to hear from them.  Will write another update once we get this to work.

A quick update in case anyone experiences the same issue.

on Firepower, we had to do the following:

remove ports from a port channel

Add the ports back to the port channel

on port-channel: set Mode to "on" and Admin Duplex to "Full Duplex"

On the nexus side:

Latest Contents
difference between /api/mo/xyz.xml vs. /api/node/mo/.xml
Created by CCBergmann on 02-28-2021 05:09 AM
0
0
0
0
Hi Folks,could anybody explain me the difference between the API Calls with the "node" keyword in between?So when do i need thehttps://apic-ip-address/api/node/mo/.xmlvs.https://apic-ip-address/api/mo/uni.xmlbest Regards
nexus 3172PQ-XL vs nexus 93180YC-FX for 10G SFP+ server depl...
Created by istr on 02-27-2021 12:08 AM
1
0
1
0
Hello,we have a UCS mini implementation with a pair of FI6324s and we would like to acquire a pair of Nexus switches which will be strictly used for the interconnection between the FIs and 3 Netapp AFF C190 Storage Arrays. The blades (four actually) are B... view more
Checking Live Traffic Statistics on ACI Leaf , using CLI
Created by netbeginner on 02-26-2021 08:13 PM
0
0
0
0
Hi All,  Is there any CLI command available on Cisco ACI Leaf to check the live traffic statistics on particular interface...as like we are checking with IOS / NX-OS with "sh interface eth1/2" This command is working on Leaf But not showing... view more
MDS9148S support M_Port (Mirror Port)?
Created by lucastpimenta on 02-26-2021 02:23 PM
0
0
0
0
I'm trying to find some documentation for the MDS9148S Switch that proves the support of the following port types: F_Port (Fabric), M_Port (Mirror Port) and E_Port (Switch-to-Switch). I easily found F_Port and E_Port:Fiber Channel standard port types... view more
Where are zoning changes logged to?
Created by Brian-UofM on 02-26-2021 01:37 PM
0
0
0
0
I am trying to find out where zoning changes are logged to.  For example, an admin creates a new zone, adds it to the active zoneset and commits the changes (we usually do this via CLI).  A little while later we get a report of an issue and... view more
CreatePlease login to create content
Discussion
Blog
Document
Project Story
Video
Related Content
Discussions
Blogs
Documents
Events
Videos
Project Gallery
Content for Community-Ad