How the concepts of VLAN and VSAN are implemented in UCS

In UCS the implementation of VLAN and VSAN are influenced by the concepts of End-host mode and FCoE. The UCS system by default works in End-host mode. This mode of working is different than a regular switch mode. In End-host mode the UCS 6100 series fabric interconnect appears to the external LAN as an end station with many adapters. In UCS the Fibre Channel traffic is carried over Ethernet using FCoE protocol. Hence you will need to assign a separate VLAN that a VSAN will use inside the UCS environment.

In Unified Computing system (UCS) each VLAN is identified by a unique ID. The VLAN ID is a number that represents that particular VLAN. You can use a number of your choice to represent a VLAN however the range 3968 to 4048 is reserved and can not be used. While creating a VLAN in UCS, the VLAN is also assigned a name. The concept of naming a VLAN is used as it provides a layer of abstraction which is helpful in situations like where you need to update servers (using service profiles) that are in that VLAN. In case of a cluster configuration (two UCS 6100 series fabric interconnects in cluster) a named VLAN can be configured to be available from only one fabric interconnect or both of the fabric interconnects. This means that you can create a VLAN which is visible in either one fabric interconnect or both fabric interconnect. It is also possible to create separate VLANs with same name on both of the fabric interconnects but with different VLAN IDs. You can also create more than one named VLANs with the same VLAN ID. Note that the name of a VLAN is known only within the UCS environment, and outside of the UCS the VLAN is represented by the unique ID.

As in the case with VLAN, a VSAN can be created on either one of the fabric interconnects or both of the fabric interconnects. A VSAN is identified with a unique ID, which is a number, and is also assigned a name. While creating a VSAN it is mapped to a VLAN which it will use to carry the Fibre Channel traffic over Ethernet. As with the case of VLANs; VSANs can also be created with same name but different IDs on both of the fabric interconnects. After creating a VSAN it can then be assigned to a specific FC interface. The UCS 6100 series fabric interconnects run in N-Port virtualization (NPV) mode and all switching is performed by NPIV enabled northbound switch. Each fiber uplink from Cisco UCS to the distribution layer supports only one VSAN. This is specified as a property of the uplink. Note that UCS does not support F-Port trunking or port channels for FC and as such there is no HA designed into UCS for FC. However multipathing drivers and dual redundant fabric design can be utilized for HA.

To learn more about VLANs on UCS check the following video. 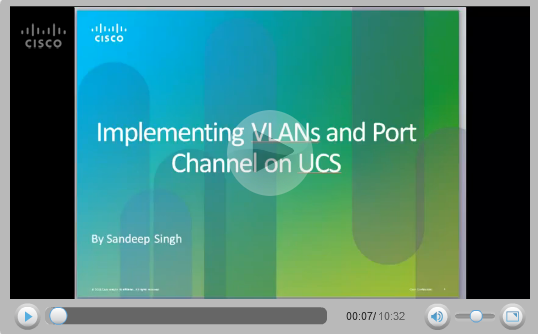 To learn more about VSANs on UCS check the following video. 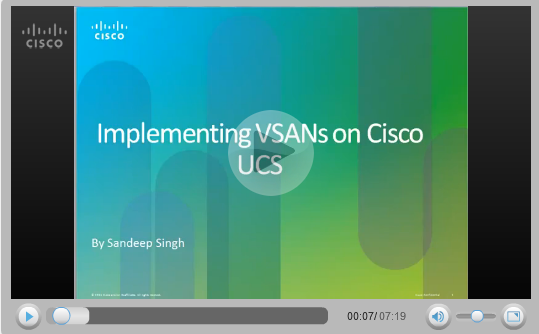 Configuring VLANs on UCS and VMware

0 Helpful
Share
Latest Contents
compatibility of X2-10G-LR Module with SFP-10G-LR
Created by ayounas on 04-13-2021 11:49 PM
0
0
0
0
Hi,I have cisco 6513 Core switch, having module  WS-X6816-10G-2T / WS-X6816-10GE(baseboard) I need 10G modules for it. Will X2-10GB-LR be compatible with it? also on the Access Switch side I will use Cisco SFP-10G-LR, will it work ok with X2-10G-LR?@... view more
CUCM Automation
Created by Juraj Papic on 04-13-2021 01:18 PM
0
0
0
0
Hello, I would like to know what tools I can use to automate cucm. Thanks.
Intersight Appliance Stuckat Starting Services
Created by rchacko on 04-13-2021 12:09 PM
0
0
0
0
HiMy installation is stuck at 'Starting Services' and I can see it in the console that there are three service errors/pending. Any help would be appreciated. Raj
DCNM Installation for LAN and SAN deployments
Created by NDP on 04-13-2021 07:26 AM
0
0
0
0
Could someone help me with the information for DCNMI am asked to setup DCNM server to manage LAN Nexus Fabric and SAN fabric in our environment. I just know that DCNM is kind of management tool. I was going through this link https://www.cisco.com/c/e... view more
How to troubleshoot connectivity issues in DataCenter. (NEXU...
Created by gary_the_network_guy on 04-13-2021 05:08 AM
2
0
2
0
I have problems with my iSCSI-VLANs, high latencies and connection loss. I am currently learning for my CCNA, so I do not have any experience with NX-OS.
Create ContentLogin to create content
Question or Discussion
Blog
Document
Project Story
Video
Related Content
Discussions
Blogs
Events
Videos
Project Gallery
Content for Community-Ad