RAID is an array, or group, of multiple independent physical drives that provide high performance and fault tolerance. A RAID drive group improves input/output (I/O) performance and reliability. The RAID drive group appears to the host computer as a single storage unit or as multiple virtual units. RAID levels describe a system for ensuring the availability and redundancy of data stored on large disk subsystems. A drive group is a group of physical drives. These drives are managed in partitions known as virtual drives. A virtual drive is a partition in a drive group that is made up of contiguous data segments on the drives. A virtual drive can consist of an entire drive group, more than one entire drive group, a part of a drive group, parts of more than one drive group, or a combination of any two of these conditions.

RAID 0 uses striping to provide high data throughput, especially for large files in an environment that does not require fault tolerance. Disk striping involves partitioning each drive storage space into stripes that can vary in size from 8 KB to 1024 KB. These stripes are interleaved in a repeated sequential manner. The combined storage space is composed of stripes from each drive. RAID 0 does not provide any data redundancy but does offer the best performance of any RAID level. RAID 0 breaks up data into smaller segments and stripes the data segments across each drive in the drive group.

Checking the server through CIMC it was found that the status of the Physical Drive 2 was showing “Foreign Config.” And the health as “Moderate Fault”. There are two Hard disks in RAID 0 group and one of those is Physical Drive 2, which has the problem. After replacing this hard disk the status of the Physical Hard disk is showing as “UnConfigured” but the Health status is “Good”. 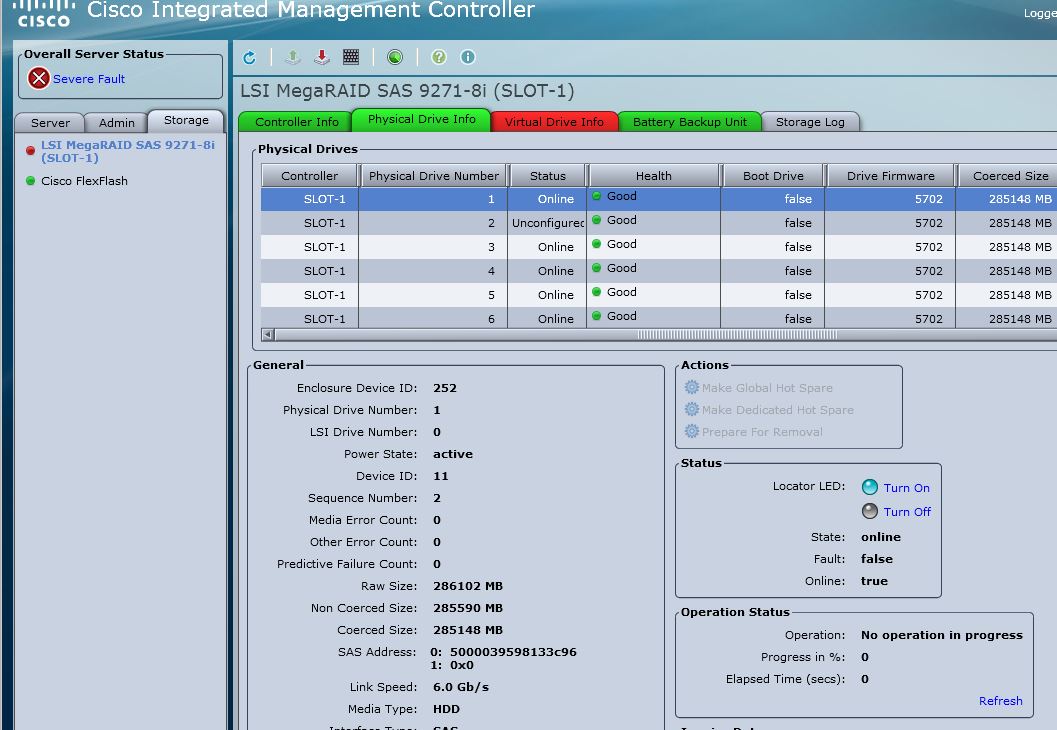 RAID 0 does not support disk failures. You need to take both disks and configure them for RAID 0 again and then install the OS.

Follow these steps to configure RAID using the WebBIOS:
Step 1       In the Navigation pane, click the Server tab.
Step 2       On the Server tab, click Summary.
Step 3       From the Actions area, click Launch KVM Console.
The KVM Console opens in a separate window.
Step 4       From the Server Summary page, click Power Cycle Server to reboot the server.
Step 5       Press the Ctrl key, and then press H during bootup to access the WebBIOS.

0 Helpful
Share
Latest Contents
VxLAN EVPN Testing
Created by cloudlogics on 10-17-2021 04:20 AM
0
10
0
10
I am new to VxLAN. I am testing VxLAN EVPN in eve-ng following this linkhttps://www.packetcoders.io/how-to-build-a-nxos-9000v-based-evpn-vxlan-fabric/I have setup everything and I can see that remote MACs are visible at each VTEP but I can't ping across f... view more
N7K-F348XP-25 -"Reset (powered-down) because module does not...
Created by simon.haystack on 10-17-2021 03:53 AM
0
0
0
0
Hi, I am having a problem with a 'new' card installed in a nexus 7004. The card powers on for a short time, then goes into powered-dn state.  The outputs (below) I am looking at don't really point to anything obvious. Any ideas ? Thank... view more
Force interface UP/UP in Nexus 9000
Created by saul alonso ramos on 10-15-2021 06:20 AM
1
0
1
0
Hi, We are trying to get a Nexus port (which is a span destination for Rx) to be up and transmit even if Rx is not connected in it. In other cisco platforms you could achieve this by using the no keepalive command but seems to be taken out in th... view more
Cisco ACI 5.2 no longer long-lived?
Created by vv0bbLeS on 10-14-2021 08:17 AM
2
5
2
5
Hello all,Back in August Cisco had given notice that the 5.2 version had been added to the list of long-lived releases, and the 3.2 branch had been removed from that list.https://www.cisco.com/c/en/us/td/docs/switches/datacenter/aci/apic/sw/recommended-re... view more
Is it possible to configure VPC without SFP?
Created by katsumis on 10-13-2021 03:40 AM
2
5
2
5
We are trying to configure VPC using just the UTP ports but is it possible to configure VPC without SFP?Is SFP necessary to configure VPC?  We are using Nexus 93108TC-EX.Thank you
Ask a Question
Create
+ Discussion
+ Blog
+ Document
+ Event
+ Video
+ Project Story
Find more resources
Discussions
Blogs
Events
Videos
Project Gallery
New Community Member Guide