NXOS mode : Is it Possible to Use the Nexus 9300 as the parent switch for Fex 2K Fex in the following Topology?

Is it Possible to Use the Nexus 9300 as the parent switch of N2K fex, in the following Topology? (NXOS) 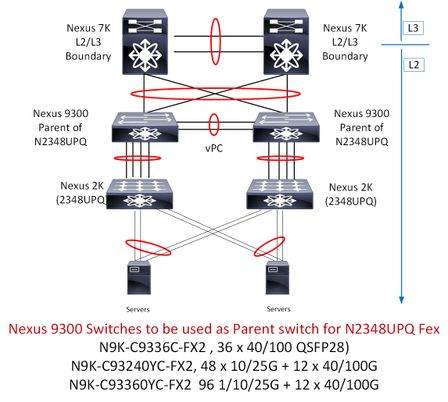 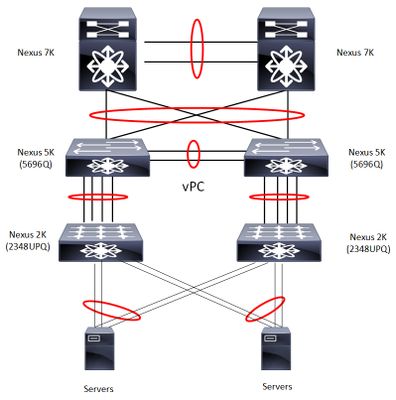 Are there any important considerations that need to be taken?

For example, i found the 3 following considerations:(are there more?)

The N9K switches needs to be configured in a vPC domain - vpc peer-link is missing on the topology, so this is why I am mentioning (however for double-sided vpc between 9k and 7k you do need vpc, so i guess the existence of the vpc domain is implied)

Make sure you run a NXOS version which supports the FEXs. For example 9.3.1 for N9K-C93360YC-FX2 and 9.2.1 for the other two model. Reference: https://www.cisco.com/c/dam/en/us/td/docs/Website/datacenter/fexmatrix/fexmatrix.html

- Mostly Straight-Through connection between Fex and N9300 is required(No problem) -> Only single homed FEXs are supported for your N9K switches.

Beginner
In response to msdaniluk

I edited the images.

I had forgotten to add the vpc links.

This is the correct diagram.

Does this solution work now?

VIP Engager
In response to S. B

Have a look over the supported topologies:

Latest Contents
HX Upgrade 3.5 to 4.0 part 2
Created by ronpeter on 03-02-2021 03:25 PM
0
0
0
0
(view in My Videos)
HX Upgrade 3.5 to 4.0 part 1
Created by ronpeter on 03-02-2021 03:18 PM
0
0
0
0
(view in My Videos)
Cisco Nexus Dashboard: Under the hood with Day 2 Operations ...
Created by ukodali on 02-23-2021 11:53 AM
1
5
1
5
Cisco® Nexus® Dashboard revolutionizes operations in today’s modern data-center environments. Join us to learn about the operational efficiencies realized from the seamless user experience of the dashboard and the powerful capabilities of Cisco Nexus Insi... view more
AVE HTML5 Plugin Error
Created by Shankar K on 02-15-2021 11:12 PM
1
0
1
0
Hi Team,   The HTML5 plug installation is successful. But I get the following error while I click on AVE. The other icons are showing up the results except AVE. Please let me know your SME thoughts on this error.   No VmmDomains Found   Tha... view more
Customer Connection Briefing - Next Generation SAN Fabric He...
Created by Kelsy Tibshraeny on 02-15-2021 02:06 PM
1
0
1
0
This session will help administrators and architects leverage SAN Insights Discovery to help understand the current status of their SAN fabric and help identify areas of opportunity for improvement. The attendees will learn the process, architecture, and ... view more
CreatePlease login to create content
Discussion
Blog
Document
Project Story
Video
Related Content
Discussions
Blogs
Documents
Events
Videos
Project Gallery
Content for Community-Ad