Welcome to the new Cisco Community. LEARN MORE about the updates and what is coming.
Turn on suggestions
Auto-suggest helps you quickly narrow down your search results by suggesting possible matches as you type.
Showing results for
Search instead for
Did you mean:
Create a new blog
7964
Views
39
Helpful
1
Comments 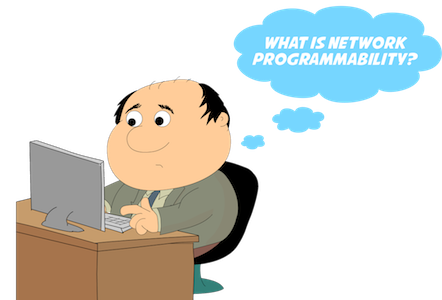 In Vegas at Cisco Live we are introducing a new DevNet Learning Path called “Network Programmability Foundations” and I’m pretty excited to see it come together.  The idea behind the path came from many discussions with attendees within the DEVNET Zone at recent Cisco Lives in Melbourne, Berlin, Cancun and last year in Vegas.  Network Programmability is such a large topic, that it can be a bit overwhelming and difficult to figure out exactly how to jump in, and where to start.

"Network Programmability Foundations” was designed to offer a currated set of sessions and activities scheduled through the week within DEVNET Zone that provide a starting point covering both core programming and network programmability topics.  The topics covered in the classroom and workshop sessions are in the categories of

Cisco Live session registration will be opening soon, and within the catalog you’ll find “Network Programmability Foundations” as a Learning Path to help as you arrange your week. 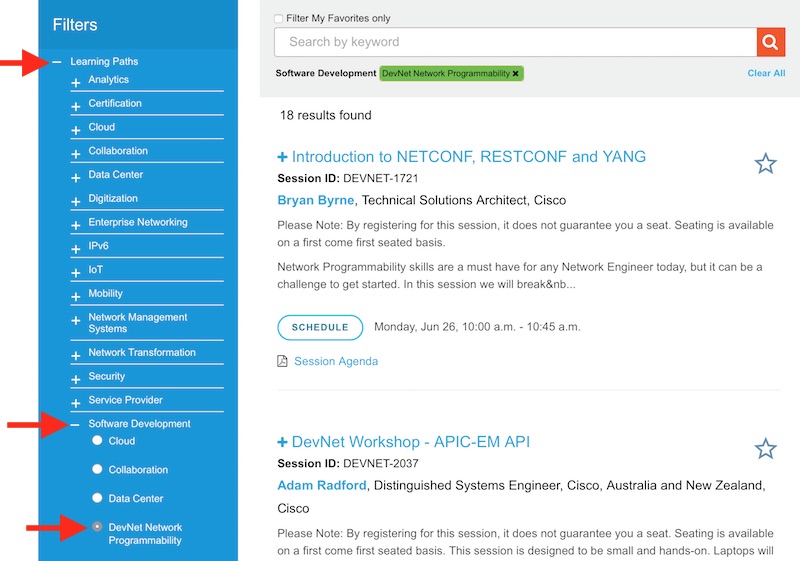 Here’s a preview of what the track has to offer!

In this first installment of the three part coding series designed for Network Architects and Engineers you will learn core Python skills and look at libraries and templates helpful for working with network objects and devices.

The new industry standards for model driven programmability are all about YANG Data Models and the protocols of NETCONF and RESTCONF.  In this session we’ll demystify exactly what problems they solve, how these technologies relate to each other, and get you ready to get hands on in the workshops!

Armed with an understanding of the protocols from DEVNET-1721, in this DEVNET Workshop you’ll get hands on experience using NETCONF along with YANG Data Models with routers and switches.

The APIC-EM Enterprise Network Controller is a foundation element of the Digital Network Architecture and offers a platform for network configuration, operation and troubleshooting through it’s many applications.  In this session you’ll learn all about the APIs it offers for your custom scripts and apps.

With Meraki, Cisco takes network programmability to the Cloud.  Learn about the capabilities of the platform to help you automate network deployments, locate devices in real-time, collect marketing data, and engage your customers.

DEVNET-1725: How to be a Network Engineer in a Programmable Age

Start Tuesday with a look at what it means to be a Network Engineer… We'll look back fondly on the early days of networking, when the it was simple and the biggest concerns we had the number of Spanning-Tree instances to run... You 'll laugh, you 'll groan, you might even get angry, but that 's okay.

In this session learn about the focus and important Cisco has placed on Network Programmability across enterprise, data center and service provider.  You’ll hear about the latest advancements and capabilities around open and standard APIs, application hosting features, and Day 0 provisioning technologies.

In the second part of the programming series you will build upon what you learned in Part I and to develop a set of OS and network based utilities that can be added to the Python Toolbox you started on Monday.

DEVNET-1694: Supercharge the Network with Python On IOS-XE

Python has become the language of choice for network automation, and in this session you’ll learn how with the latest release of IOS-XE you can know build and execute your Python scripts directly on routers and switches!.  Though focusing on IOS-XE, this feature also works on NX-OS and IOS-XR.

In this hands on workshop you’ll have a chance to test drive the NX-API with some real-world examples of network programmability.

In the final installment of the coding series, this session builds upon the toolbox utilities created in the previous two sessions showing how to build additional Python based network programming tools. These include using the Python socket library to create a simple TCP based client/server message passing script.

Learn how to leverage Guest Shell to install and host Linux Applications directly on your routers and switches in this session.  Though this session will leverage the latest IOS-XE software release, NX-OS also offers this capability and lessons learned here can be leveraged within the data center as well!

Get hands on in this workshop by working with the APIC-EM REST API to access the powerful network applications hosted on the enterprise network controller.

Put the new IOS-XE features to use in this workshop and fire-up Python directly on an IOS-XE device, explore the included Python libraries for interacting with the network element, and see how to integrate Python script execution into your operations workflows.

Get ready to see how you can install and execute your favorite Linux utilities and software directly on your IOS-XE routers and switches in this session.  Don’t have any favorites?  That’s okay, you will when you leave this session!

DEVNET-1002: DEVNET Workshop - NetDevOps for the Network Dude - How to get started with API's, Ansible and Python

DevOps isn’t just for application developers or system admins.  Get hands on with the tools that can help you really up level your network automation practices.  Bathrobes and bowling shoes optional attire.

Attend this jam packed workshop for even more hands on with the key model drive programmability technologies of NETCONF/RESTCONF/YANG.

I know what you are thinking… holy buffer overload Batman… that’s quite a schedule… and yes it is.  But believe it or not, it’s only a selection of the great content we have in store for you within the DEVNET Zone covering network programmability topics.  If you have been dabbling in the topics for awhile now, we have more sessions on topics like network analytics, zero touch provisioning, YANG programming with ydk, network function virtualization, and Open Source projects like OpenDaylight.  Not to mention all the sessions on IOT, Security, Collaboration, etc, etc, etc…

And stay tuned for more details on other elements of the “Network Programmability Foundations” program.  We’re planning some special swag for participants, meet-ups and all around social networking before, after and during Cisco Live proper!  Let me know what you think in the comments!