Rolling calls from one phone to another and then to voicemail

Labels:
I have this problem too
0 Helpful
Reply
24 REPLIES 24

Always mention what products you're using, and not just what you want to do, or the problem.

I am using cisco unified call manager 11.5 and  Cisco unity connection administration 11.5 with cisco IP phone model 8841. CAlls come in on a central phone number from outside customers and need to roll over to three separate number starting with the phone 1, followed by phone 2, phone 3 and then  common voicemail box that can be accessed by the users of phone 1,2 and 3 if no one can answer the call.

Hall of Fame Cisco Employee
In response to cis-admins

Then a line group would do the trick, and configure the hunt pilot DN as the DN for the common mailbox.

I checked and it looks like that was what has been configured by someone in the past but for some reason quit working, it no longer rolls to the next number and then when it goes to voicemail they  get a message cisco unity no operators available

Beginner
In response to cis-admins

Check your Line Group configuration if you still have the other two DN's added under "Selected DN/Route Partition".

If using CUCM (not express).  Create a Line Group and assign the three phones you want the main line to ring to.  Choose how you want the calls to distribute.  Create a Hunt List and associate the LG you just created.  Create a Hunt Pilot and give it an extension.  Assign it the Hunt List you just created it. You can then configure the Forward Hunt No Answer and Busy to route to voicemail.  Configure the xlation pattern for the main number to route to your Hunt Pilot extension.

As you already mentioned it is configured then I would like to suggest you to reset the hunt list once.

Beginner
In response to Pankaj_yadav

Beginner
In response to Pankaj_yadav

How do you reset the hunt list? What happens when you reset it that will fix it? Does it clear any configuration that I will have to put back? Will it reboot the phones?

Find the hunt list, select it and reset.  Resetting the hunt list does drop any calls in progress using the gateway.   You will not lose any saved configuration and does reboot the phones.

Sorry for the typo's and it does NOT reboot the phones, I left out the "not" in my post.    Looking back in the thread, is this what your trying to troubleshoot?  "I checked and it looks like that was what has been configured by someone in the past but for some reason quit working, it no longer rolls to the next number and then when it goes to voicemail they  get a message cisco unity no operators available"

I doubt resetting the hunt list will fix this but worth a try.  It sounds like pieces are missing from the setup.  Can you provide a screen shot of your line group setup?  Do the extensions selected exist in CUCM and associated with a device?  Do you have a CTI RP created to route calls to Unity if no answer?

Correct it was configured by someone else and according to the users it worked up until January of 2019.

"Can you provide a screen shot of your line group setup?" I don't know what part you would need or even I can redact it and not make it unreadable But I think I can at least include these settings

Do you have selected DN's under the current line group members section?  If so and they are correct, did you verify they ring?

If so, then your good up to that point.  You then need to look at the Hunt Pilot that is configured.  This will be the DN that you have the main number translating to.  On the Hunt Pilot Configuration, you need to look at the Hunt Call Treatment Settings.  For the Forward Hunt No Answer -  Is the Forward Unanswered Call to checked?  and if so, the Destination should have an DN 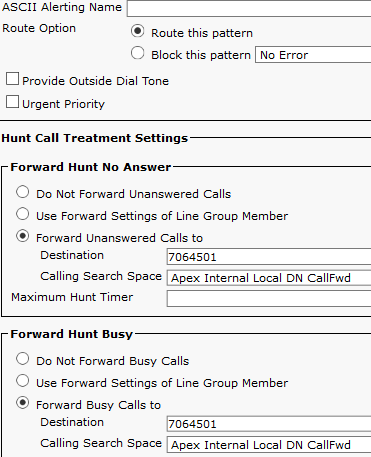 If you have an extension configured for the destination.  Go to route plan report in call manager (Call Routing --> Route Plan Report) and search for pattern that contain that extension.  Does it exist?