Cisco Community present at Cisco Live EMEA 2023. See you in Amsterdam! Learn more.
Turn on suggestions
Auto-suggest helps you quickly narrow down your search results by suggesting possible matches as you type.
Showing results for
Search instead for
Did you mean:
Start a conversation
Options
213
Views
0
Helpful
7
Replies

I have an issue with asa 5520 on gns3 ,while i am able to ping loopback addresses i can not ping any physical interfaces.have you experiences such behaviour before? Now i need your advice, i have set up this network but i am new to asa and i am lost.so i need your precious help.i have 4 servers in dmz area .i want to use the public address in the outside interface .Servers will normally have a private addressing scheme i can not see any other option .R3 edge router needs to support easyvpn for remote users .i want to deploy pat in asa ..do you think this is feasible ? i am really confused ...and i do not know what to do .. any recommendations improving the network will be highly appreciated. 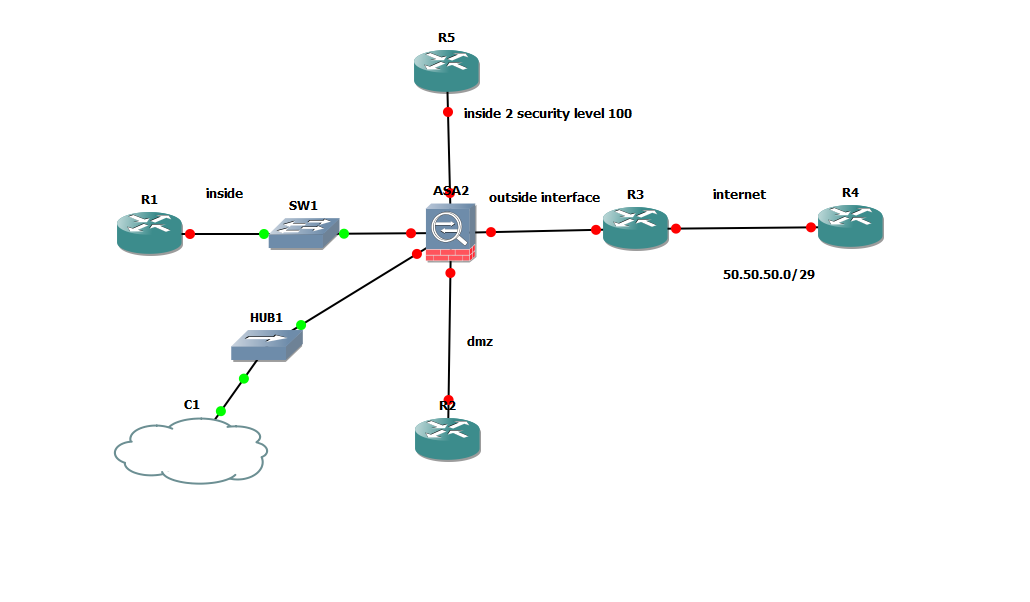 i use this for guidance but they do not provide the public address between edge router and isp ..so i am not sure what i am doing.

thanks in advance for your help!!

This sounds very much like a virtualization issue.  Have you saved your config and tried restarting the devices?

Is the outside interface on the ASA a public IP address?  From your diagram it looks like the only public IP would be on R3.  In this scenario it would be R3 which does the NATing

Marius thank you very much for your reply ...yes i tried everything only loopbacks are working. I use public 100.100.100.0/29 on the outside network .. i assign static nat on 4 servers and pat for the rest of the network ... edge ip addressing scheme is 50.50.50.0/30 is it possible to work this project? the connection from both inside and inside 2 to dmz and outside works perfect.i need your advice what security level i have to assign  to dmvpn link ? the hub is connected with 4 branches.Anyone experienced this situation before ? any kind of improvement and recommendation is highly welcoming. To inform you all traffic from branches will pass throught the firewall for monitoring . so i think there is no need for nat on dmvpn right ?thanks in advance!! 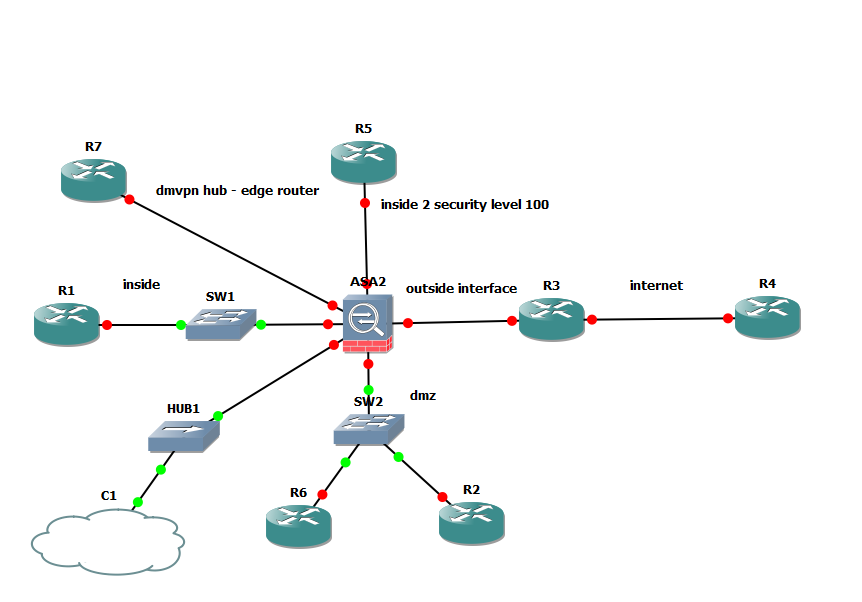 When you say only loopbacks are working, how are you testing? where are you pinging from and to?

not sure what you mean by "this situation".

You would need to be more specific on exactly what you are trying to accomplish with this design so that we can come with suggestions to improvements and recommendations.

Thanks for the reply Marius ,

I know it is frustrating but i am pulling my hair two days now because i am not so familiar with ASA , I know the concept with acls on interfaces .I have congigured loopback everywhere but tested with packet tracer connections are ok .pinging loopbacks are ok but no with physical interfaces.Ok let me explain you the whole project .. in the following design i have 3 branches connected to dmvpn hub which is part of ASA's branch. Branches have private addressing 172.16.0.0/24,172.16.64.0/24 etc .Although these branches are connected to internet directly the customer wants all traffic from branches goes through ASA's branch and then they will be able to access the internet.Another thing is that branches will not have any access to leased line network .All branches should have access to dmz area and internet for services like http ,https.Rmote customers have to be able to access to dmz area .So what i have done so far , i have configured dmvpn but it is not connected yet to ASA's branch.so my first question is how i am going to treat this traffic ? dmvpn hub is connected to ASA.I have configured remote ipsec vpn on ASA for remote users with different private address that i am using .The outside has public network  200.200.200.0/29 and the edge router 50.50.50.0/30 network .I did not want to do nat on edge because it seemed so complex.i hope that this information help you out Marius .if you need more details please do not hesitate to contact . 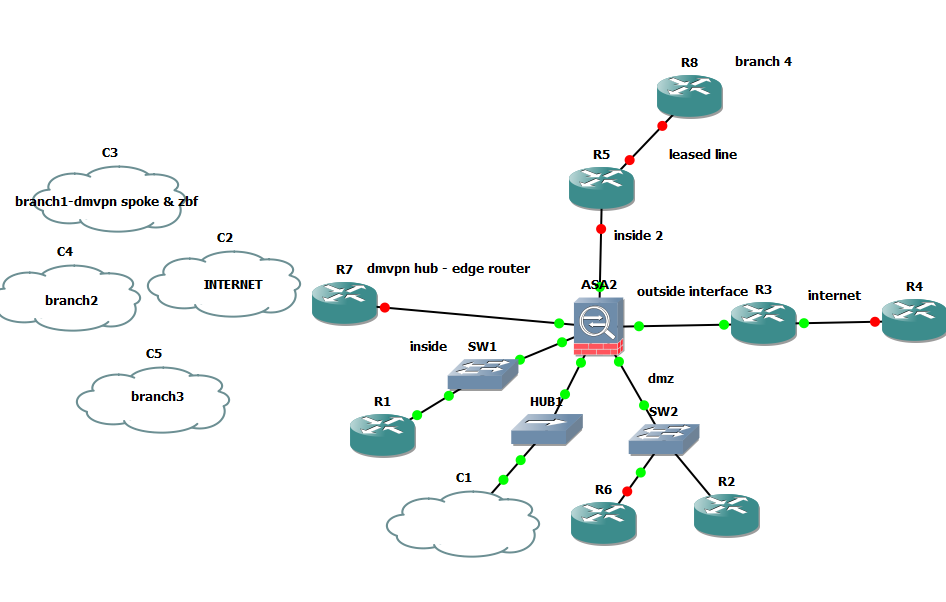 Thanks again for your time!!

If it doesn't connect to the internet then NAT is not required.

The hub has a static public IP though, correct?

As for the ASA you would need routing to each spoke pointing out the interface that connects to the hub router.

Is this testing of a design that will be implemented or is this for theoretical purposes?

Goodmorning Marius, yes hub has a public address as well ...all branches running eigrp except for the one connected via leased line .The whole project is just for theoritical purposes ,no real enviroment..the main goal is to provide the highest and versatile security across the network .So all traffic will traverse dmvpn and will end up crossing the ASA.So it would be great to have your thoughts on this design concering security.

Because of the way DMVPN works traffic between the Branch offices will not pass through the ASA.  This is because a direct tunnel is established between the spokes.

So, If you want even the branch to branch traffic to pass through a firewall, you would need to set up a firewall at each location.

Other than that, you would need to configure specific rules on the ASA allowing only the subnets and ports you define to be able to access between the different areas in the network...this could become quite time consuming depending on how many subnets you have and how restrictive traffic between subnets should be.