Cisco Community
English
Register
Login
ANNOUNCEMENT - Security Restructure has finished!. Email and Web Notifications are ON now - LEARN MORE
RegisterLogin
Options
Turn on suggestions
Auto-suggest helps you quickly narrow down your search results by suggesting possible matches as you type.
Showing results for
Search instead for
Did you mean:
627
Views
0
Helpful
2
Replies

I have a need to multihome out two MAN links to the same ISP. The two links will connect via an ISR and will participate in an eBGP adjacency. On the internal side, iBGP will be used to create the alternate default route to the ISP. Each of the ISR’s downstream ports participates on the same Ethernet subnet. On the same subnet/broadcast domain, there are two ASA5510 appliances that will use HSRP to advertise the public IPv4 addresses and will NAT them into the private network.

My question is, since the ASAs do not participate in BGP, and since we are going to NAT the traffic eliminating the need to use a route map to inject the default route into the downstream EIGRP network, would I simply build a static default route in the ASAs out the upsteam interfaces?  My initial thought is to not worry about recursive lookups because they are connected via Ethernet. 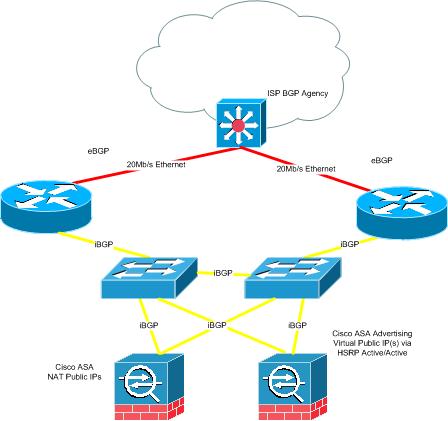 Labels:
Everyone's tags (4)
I have this problem too
0 Helpful
Reply
2 REPLIES 2
Highlighted

First of all ASAs do not run

First of all ASAs do not run HSRP. I think you are talking about failover Active/Active which works completely different so make sure u got that first.

I still am not sure about your deployment meaning do not understand what are those L2 switches doing there with the iBGP arrows going to the ASA.

I would say instead of iBGP use EIGRP or OSPF which is actually supported on the ASA, that way you can dynamically switchover whenever needed.

Yes Jcarvaja, HSRP is not a

Yes Jcarvaja, HSRP is not a feature on the ASAs, and yes HSRP is difficult to setup natively to support active/active load balancing on any device. That's not really the point though is it. FHRP's are typically used for distribution switches and finely tuned to access layer 2 and layer 3 convergence, unless using GLBP (and even then should be considered). My mistake for using the term HSRP and thank you for pointing it out.

As for the iBGP links, they represent the same subnet as I mentioned. The cat switches are there to facilitate physical restraints as each pair of ISRs and ASAs are two miles apart. Since the ASA's are performing NAT, they don't really participate in the BGP network and there is no need or capability to inject the BGP default route into the EIGRP network. They will participate in the downstream EIGRP network. If the MAN connection on one ISR goes down, then the iBGP route to the Internet will be graduated. I guess I could have indicated on the drawing that these were all a part of the same subnet.

How do I configure the ASA's static default route? Wouldn't I be able to inject  a static default route in each ASA using the ASA's outside interface when using active/active? If I have to, I could see if we can use EIGRP on the network upstream of the ASAs if there is no other way of doing this, but this is not preferred.

Any help you can provide is greatly appreciated.

0 Helpful
Reply
Latest Contents
Multiple Vulnerabilities in Cisco FXOS and NX-OS Software
Created by Omar Santos on 02-26-2020 02:18 PM
0
0
0
0
On February 24, 2020, the Cisco PSIRT published eleven (11) vulnerabilities in Cisco FXOS and NX-OS Software. Eight (8) out of the eleven (11) vulnerabilities were found by our internal security and engineering teams, two were found by TAC during the trou... view more
NGFW
Created by starsulaiman21266 on 02-25-2020 01:58 AM
1
0
1
0
Hello All, i have two vm firepower as HA and they are working fine as HA the traffics going through fin but there is a red mark shows on the HA, can someone tell me what does that mean please? This only appears on the HA not in individual device... view more
Meet the Authors FAQ´s - A Cybersecurity Deep Dive with Omar...
Created by ciscomoderator on 02-24-2020 05:28 PM
0
0
0
0
Software Checker and Automation   This event had place on Thursday 23rd, January at 10hrs PDT  Introduction   Featured Author Omar Santos is an active member of the cyber security community, where he leads several industry-wide init... view more
Get the Cisco 2020 CISO Benchmark Report
Created by Kelli Glass on 02-24-2020 08:16 AM
0
0
0
0
Securing What's Now and What's Next. With our annual global survey of 2,800 security leaders, we dove deep to compile key benchmark statistics. The 2020 CISO Benchmark Report provides valuable takeaways and data on the most pressing cybersecurity to... view more
Malware Policy
Created by Manu Shankar on 02-24-2020 02:40 AM
1
0
1
0
I have 2 Firepower module (ASA 5525) with Malware and IPS licence. Recently i changed the Malware policy action set to "Block Malware" and "Reset Connection". How to log the event if my policy blocked any files? Please find the attached screen shot f... view more
CreatePlease login to create content
Discussion
Blog
Document
Video
Related Content
Discussions
Blogs
Documents
Events
Videos