Cisco Community
English
Register
Login
We're here for you! LEARN about free offerings and business continuity best practices during the COVID-19 pandemic
RegisterLogin
Options
Turn on suggestions
Auto-suggest helps you quickly narrow down your search results by suggesting possible matches as you type.
Showing results for
Search instead for
Did you mean:
575
Views
0
Helpful
6
Replies

I am looking to expand my current DMZ which really hasn't been leveraged for much but I plan to reconfigure it and leverage it across three sites. I am wondering what is the best was to approach what I am looking to do?

5. Each site has a L3 switch and MS DHCP server

I am looking for the best practice approach to this, I have some ideas but am not quite sure 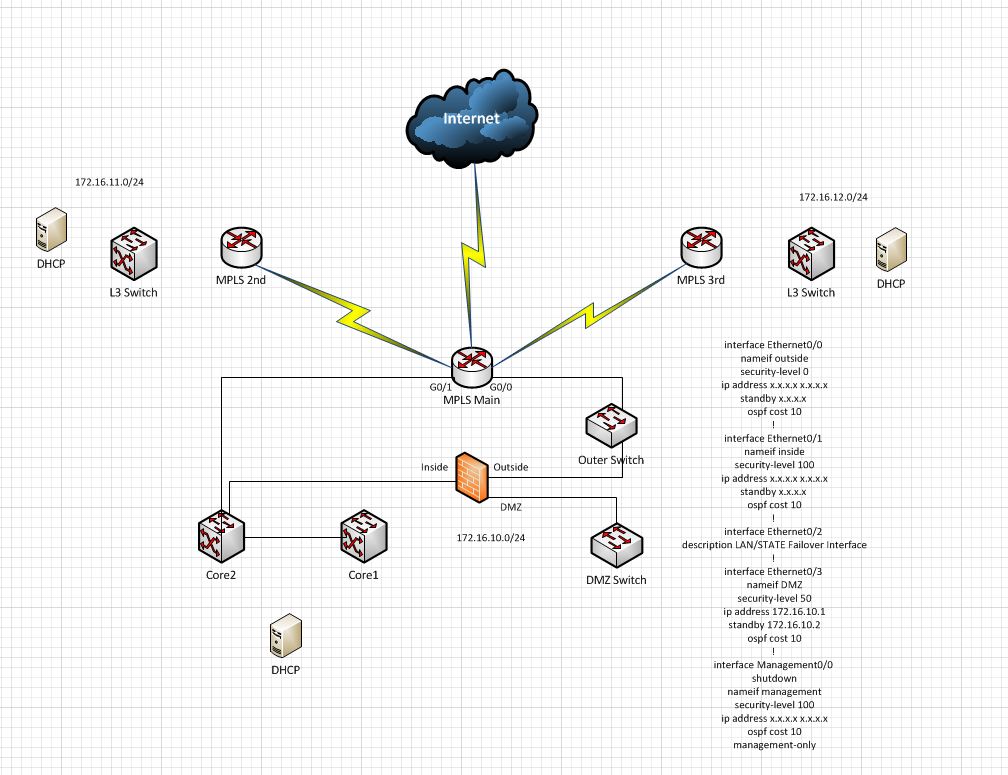 Labels:
Everyone's tags (8)
I have this problem too
0 Helpful
Reply
6 REPLIES 6
Highlighted

Are you looking to have the remote site DMZs behind the ASA DMZ interface?

Would you in other words separating the REMOTE sites LAN and DMZ networks from eachother so that they would have to connect through the MAIN site ASA to access?

Or are you going for a setup where each REMOTE site LAN and DMZ connect between eachother directly?

Do you control the MPLS router at the MAIN Site or is it an ISP device?

It is a managed MPLS, so I don't directly administer the MPLS. I was thinking I can leverage VRF's for the 172.16.x.x traffic across the WAN, then as it comes across the VRF's to the Main MPLS router, route it there to the DMZ interface so yes with this in mind this traffic would be completely segmented from each LAN

This will be my quote on quote "Guest" network. I will later install a few switches in some random IDF's for equipment that I need to present to the Internet. I can take care fo those via L2/L3 VLANs at each site..for me it's just a matter of configuring this on the ASA.

As it is now, you see that Ethernet3 is the DMZ interface, I am ware of creating subinterfaces and or even VLANs on the ASA but i'm a bit foggy on security best practices and how to go about acheiving this.

I guess there is also the question if the 3 DMZ locations have to be separate from eachother?

It seems to me the current LAN networks are communicating with eachother behind the ASA "inside" interface and in that sense the ASA doesnt control traffic between them.

Would all the 3 DMZs also be contained in the same routing table (single VRF) or would each be in their own VRF at the main site and configured on the ASA as their own subinterface? I guess this comes down to do we need to limit the connectivity between the DMZ networks.

I personally prefer the situation where the ASA is the central point through which every network communicates with eachother. This gives greated visibility to what is actually happening in the network and you can control the network better. But to be honest considering the original ASA5500 series you will quite easily run out of perfomance if each network is behind its own subinterface, depending on how much traffic is between the networks.

I guess in this case though the traffic between DMZ and LAN isnt considerable and the LAN networks even at the moment dont stress the ASA other than with outbound traffic?

It is also important to note this is an Active/Active environment (dual 5510's).

As far as which option is best, I definitely want visibility into the three DMZ networks. As far as each DMZ network being able to communicate with each other, I would initially say no but i'm thinking it can't hurt. Afterall it certainly wouldn't expose my internal network to any issues.

Option 1 is more ideal IMO. Something like this perhaps Still looking for some insight into the best approach here.

Ok, I am looking at going in this direction, leverage my L3 switches instead of using subinterfaces on the ASA.

VRF's will be in place across the WAN (not shown). Each site will have a L3 SVI and DHCP scope handing out addresses for each network.

Routes in place on core switches and ASA as shown Any thoughts on this would be appreciated

0 Helpful
Reply
Latest Contents
cisco duo integration anyconnect ssl vpn
Created by elite2010 on 04-05-2020 10:59 AM
0
0
0
0
Hi,I was trying to 2fa cisco duo , all the required settings done  as per below . The problem is duo cloud  does nti not getting any request from the asa . So I am not getting any code from the duo https://www.youtube.com/watch?v=6nEvmc8wji... view more
Community Ask Me Anything event- Configuration, Troubleshoot...
Created by ciscomoderator on 04-03-2020 05:38 PM
0
0
0
0
This event continues the conversation of our recent Community Ask Me Anything event "Secure Remote Workers". To   participate   in this event, please use the   button   to ask your questions Here’s your ch... view more
Cognitive Release Note, March 2020: Additional annotations i...
Created by aligarci on 04-02-2020 12:05 PM
0
5
0
5
User Experience Enhancements As part of the Cisco Common User Experience program, we are working towards a more uniform user experience and terminology alignment. This program runs across all Cisco security products.   Early Access introduces a... view more
Initial AnyConnect Configuration for FTD managed by FMC
Created by jgrudier on 04-01-2020 07:12 PM
12
15
12
15
This video features a step by step walk through of configuring Cisco AnyConnect on FTD managed by FMC. Timestamps included for certificate installation, Access Control, Licensing, NAT, and Deployment failures.
Certificate Signing
Created by Tyche on 04-01-2020 01:02 PM
2
0
2
0
I am trying to solve a CSR signing issue in a home lab.Can someone  clarify this theoretical point? According to Wikipedia: "Before creating a CSR, the applicant first generates a key pair, keeping the private key secret. The... view more
CreatePlease login to create content
Discussion
Blog
Document
Video
Related Content
Discussions
Blogs
Documents
Events
Videos
Content for Community-Ad