Turn on suggestions
Auto-suggest helps you quickly narrow down your search results by suggesting possible matches as you type.
Showing results for
Search instead for
Did you mean:
Start a conversation
Options
828
Views
0
Helpful
2
Replies

Routing outside traffic through two firewalls; can it be done?

I have an odd situation involving two ASA firewalls that I'm trying to configure to allow traffic to-and-from both the outside world and our main private network to reach the private network of the 2nd firewall.

I have no problems getting the traffic flow to-and-from our main private network.
A computer inside the 2nd firewall is also able to access the Internet.

Where I'm having trouble is getting access from the Internet *to* that 2nd firewall's private network.

I'm testing with RDP access to that computer inside the 2nd firewall.

Since Internet access is possible with the test computer, and I am able to access the test computer from the main private network, I'm assuming its a matter of either routing or setting up the correct access rules.

The following picture illustrates how the two firewalls are currently set up. 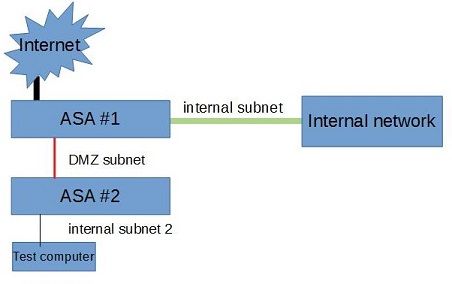 For simplicity's sake, I haven't included switches that are used in between the firewalls and on either inside network.

Firewall 1 has a public IP NAT'd to the DMZ IP address of firewall 2.
This is the IP assigned to firewall 2's outside interface.

For current testing, the access rule for that NAT allows *all* IP traffic to reach firewall 2.

There's a copy of that rule in the access rules section of both the outside interface and the DMZ interface of firewall 1.

Firewall 2 has the following configuration entries:

Other possibly germane facts:
Firewall 1 is set up with EIGRP for all of the main internal network's subnets, but NOT the DMZ subnet.

I am assuming that this is the outside interface IP of ASA2? If not then this should be changed to the ASA IP.

Is this the IP of the test PC or the ASA2 inside IP? This should be the test PC IP if it is not already.

Other than that the rest of the configuration looks fine.  If you are still having issues we would need to look at the full configurations of both ASAs (remember to remove public IPs, usernames and passwords) as well as have a network diagram of physical connections (including switches) and where routing is being performed.  Could be a possible asynchronous routing issue in this case.

Thanks for the quick response.

You are correct on the other two entries you reference; the following is the outside interface IP of ASA2

and the following is the internal IP of the test PC.