As a part of the Enterprise Networking (EN) team’s journey to Intent-based Networking, Cisco recently announced availability of the latest release on the IOS-XE train – IOS-XE Gibraltar 16.10.1. This is a standard maintenance release supporting Switching, Wireless, SP-Access, Routing (16.10.1a/b) as well as IOT platforms with a sustaining support lifetime of 12 months and two scheduled rebuilds. A unified software release for Enterprise Networking, it adds support for new software features on the existing platforms and also introduces support for new platforms across the various EN technology areas.

While 16.10 spans the breadth of the EN products, here we are going to focus specifically on all that the software release brings in for Catalyst.

Here’s a great read on the recent Catalyst 9000 Expansion.

The new Cisco Catalyst 9200 Series Switches are enterprise-class access switches that extend the power of intent-based networking and Cisco Catalyst 9000 Series Switches hardware and software innovation to a broader scale of deployments. These switches focus on offering simplicity without compromise – they are secure, always on and provide IT simplicity features for the mid-market and simple branch deployments. IOS-XE 16.10.1 introduces support for 4 new SKUs in this family - C9200-24T, C9200-48T, C9200-24P and C9200-48P. These are 24 and 48 ports data-only and PoE variants that come with modular uplinks, modular fans (dual) and module power supplies (dual). There are two options for the modular uplinks - 4x1G and 4x10G. These switches support up to 8-member StackWise-160 and so provide Fast PoE+ capabilities for up to 384 ports per stack.

These modular uplink models are expected to FCS early next month.  Also, note that the introductory software release for the fixed uplink models - 9200L – is IOS-XE 16.9.2 instead.

Catalyst is not just switching anymore!

The New Catalyst 9800 Series Wireless Controllers are powered by an open and programmable Cisco IOS XE and combine the best of RF excellence with IOS XE benefits. These are the industry’s most reliable and highly secure controllers, ready to deploy anywhere - including the cloud of your choice. You can: Install critical updates without affecting user access, manage rolling updates of Wi-Fi access points and deploy on-premises or run as software in select Catalyst 9000 switches or in private or public clouds. Visit here for all the details.

Switching Software in IOS-XE 16.10.1 adds features across the Catalyst 9000 portfolio in areas of security, network segmentation, high availability and platform infrastructure. Following are the key switching features and their applicable platforms: 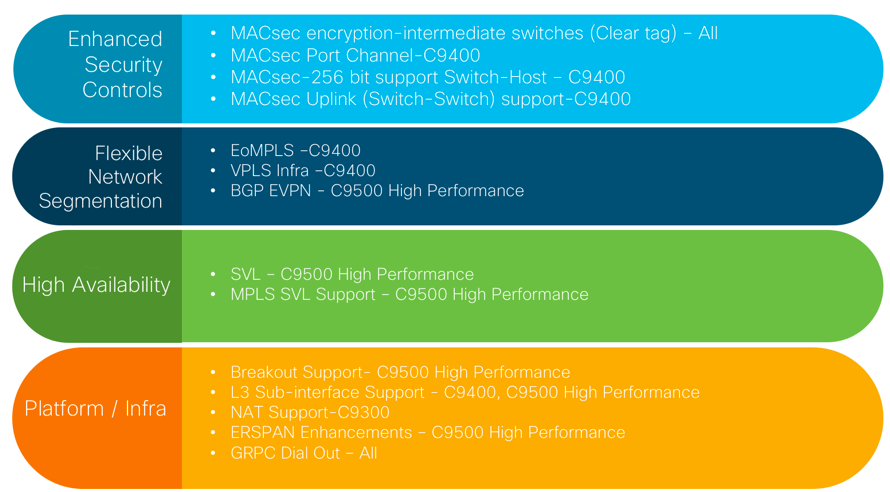 Starting with Security, enhancing the capability to provide a network-wide encryption is most sought after by governments and organizations. Compared with other 9K platforms, Catalyst 9400 has required catchup in its MACsec capabilities. 16.10.1 brings in the following enhancements in MACsec:

With the 16.10.1 release, Catalyst 9400 also enables support for Ethernet over MPLS (EoMPLS) and Virtual Private LAN services (VPLS). This is applicable to SUP-1/SUP1-XL in Standalone and SVL mode. EoMPLS/VPLS have been already supported on C9500 and C9500 High Performance Platforms prior to this release. BGP EVPN with VxLAN that enables scalable, multi-tenant and robust VxLAN overlay networks using BGP-EVPN and already supported on Catalyst 9300/9400/9500, is now also supported on the Catalyst 9500 High Performance Series with this release.

16.10.1 adds new features on the Platform Infrastructure side:

16.10 adds an array of (30+) Serviceability Enhancements that are developed to help with troubleshooting the network and reduction in operational costs. These are either completely new or modified, debug, show or set commands that provide more comprehensive diagnostics and troubleshooting capabilities. Some examples are optimised event tracing, addition of new support packages (show-tech) for stack, platform, CoPP, QoS and port, pseudo packet tracer functionality and improvement in crash information.  We suggest checking the platform specific release notes and command reference guides for details on the individual serviceability enhancements.

Finally, support for new optics and breakout cables has also been added and more specifics on this and all other features can be found in the platform specific IOS-XE 16.10 release notes, links to which are provided below:

IOS-XE 16.11.1, the next standard maintenance release, is targeted for release in March 2019. Features that have been planned for this release include core features in the areas of MPLS and SVL, support for NBAR2 and Fabric enabled wireless on the Catalyst 9200, and Cisco eWLC enablement on Catalyst  9400 and 9500 High performance helping customers reduce cost and complexity. Stay tuned for more updates!