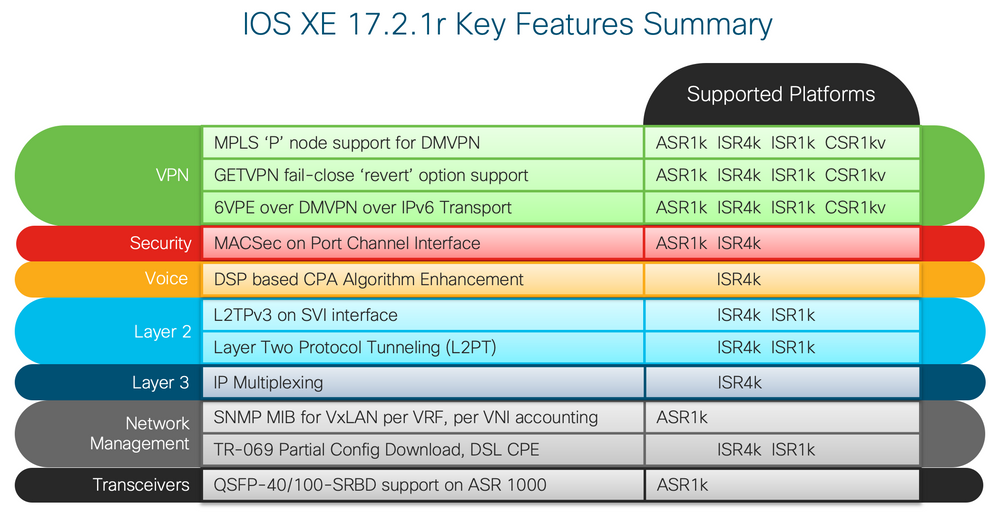 Prior to 17.2 DMVPN spokes could only act as a CE or PE on the overlay. MPLS ‘P’ node support was limited to spoke-hub topology. So, multi-tenant and MSP deployments with a full-fledged MPLS L3VPN network behind the spokes could only be used in a spoke-hub-spoke topology. MPLS ‘P’ node support for DMVPN Spoke is added for direct spoke-spoke without next hop preservation. With this the NHRP redirect gets tag switched all the way to the far end PE behind the spoke. NHRP learnt routes/labels are propagated back to the ingress PE.

GETVPN fail-close ‘revert’ option will be supported from 17.2 onwards. With this user can configure ‘client fail-close revert’ under GETVPN crypto group configuration. This allows the GM to go back to operate in fail-closed mode with the fail-close policy locally configured fail-close ACL on GM after the SA expiry. If no local policy is configured on GM, it operates in fail-open mode.

With 6VPE over DMVPN over IPv6 Transport feature, user will be able to extend multi-tenant IPv6 LAN prefixes over IPv4 DMVPN tunnel over IPv6 transport.

In 17.2 release, we are also enabling MACSec capability on Port-Channel interfaces. User can enable MACSec on all port-channel member links that are capable of MACSec functionality. Traffic going out via port-channel to remote MACSec peer, will use MACSec layer encryption and decryption for the return traffic.

The built-in layer 2 switch ports on ISR 1000 and NIM, SM modules on ISR 4000 get L2TPv3 support on SVI interfaces. This will enable support of L2VPN pseudowire tunneling over an IP network. NIM-ES2-4, NIM-ES2-8, SM-X-16S4M2X and SM-X40S8M2X modules will support this feature when used with ISR 4000 platform.

We are also adding support for Layer Two Protocol Tunneling (L2PT) on ISR 1000 and ISR 4000 switch ports. This will enable layer 2 control protocol (L2CP) packets to be carried transparently to remote LAN networks.

Layer 3 IP Multiplexing capabilities are added with release 17.2.1r. To optimize IP traffic for environments where bandwidth or processing is constrained by packets per second limitation. The feature can multiplex the smaller packets addressed to same destination into a single IP packet called as super-frame. The destination router de-multiplexes the super-frame into original IP packet stream and routes it further.

Also, here is a link to install/upgrade guide for 17.2.1r

Latest Contents
Cisco switch is not detecting ip phone
Created by Bekzod Fakhriddinov on 07-28-2021 11:02 AM
0
0
0
0
Hello guys, we have 3 cisco sbc 350 -48-fp-4x and connecting ip phones and pc to them via single port. The problem we have - ip phones are not detected on the random ports of all 3 switches  : switch1- 19 ports  , sw2 - 12 ports , sw3 - 42 ... view more
Does a router have multiple DLLs inside?
Created by 00u14adsdytr1qqSM5d7 on 07-28-2021 10:33 AM
1
0
1
0
I came across a practice question of true/false answer type . The statement is:"A router has single network layer that will interact with 2 Data link layers" .Ans:True (no explanation given) I get that N/w layer is common for all interfaces on r... view more
Dialer Interface Configuration
Created by vyas.2020 on 07-28-2021 10:26 AM
0
0
0
0
My all over country branch location connected to TATA MPLS but This particular branch (XYZ_Branch) location don't have TATA MPLS reachability at this area so we have decided to configure IPSEC tunnel between XYZ_Branch and TATA_MPLS. My local internet ser... view more
Problem with router configuration, not sure where I'm going ...
Created by pjw17279 on 07-28-2021 08:46 AM
2
0
2
0
Hi there, I'm just working my through some online lab activities with packet tracer and have gotten stuck on one activity. In this lab I'm basically troubleshooting a network and fixing errors, making sure it adheres to the IP addressing table and ha... view more
Routing issue / BGP / routing
Created by axelhauguel on 07-28-2021 08:28 AM
0
0
0
0
Hello all, I'have mount a new BGP session with amazon and I receives the prefixes :  edge01.par9k(config)# sh ip bgp neighbors 37.49.236.118 routes received Peer 37.49.236.118 routes for address family IPv4 Unicast: BGP table version is 3... view more
Create ContentLogin to create content
Question or Discussion
Blog
Document
Project Story
Video
Related Content
Discussions
Blogs
Documents
Events
Videos
Project Gallery
Content for Community-Ad