First Ever Hackathon at ONS Sets Course for Bright Future

Open Networking Summit (ONS) was this week in Santa Clara, CA. The theme of the conference was “Open Networking - Harmonize, Harness, Consume.” We kicked things off with a hackathon, the first ever at ONS. Despite being announced late and limited to a single day due to a packed schedule, roughly 100 people dropped in at some point and around 50 rolled up their sleeves and really contributed to one of more project teams. We certainly got the conference off on the right foot as we immediately began harmonizing folks from different open source projects, harnessing the passion and talents of a skilled group of open source developers, then consuming large quantities of draft beer at the Open Source Community Reception immediately after the hackathon. 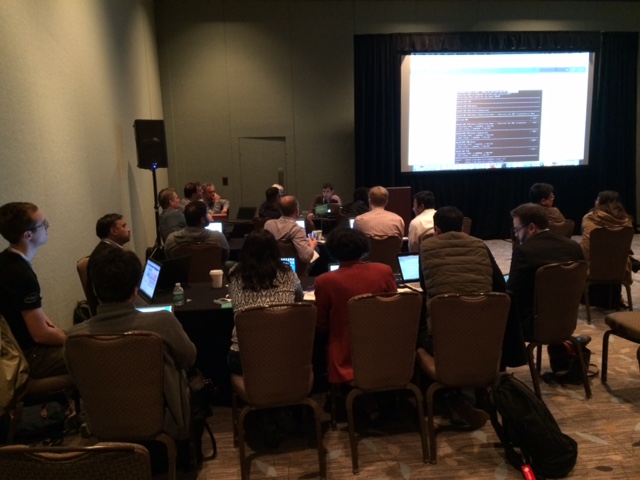 Consensus and Next Steps

Latest Contents
Python - Opening socket in VRF
Created by omarbognanno on 05-20-2022 11:37 AM
0
0
0
0
Hello everyone, I'm trying to develop a script to run on IOS XR 6.6 (32 bits, QNX based) to perform a single ping to a large number of destinations in a short time.I found this script to perform such operation: GitHub - romana/multi-ping: Python... view more
IOS-XE & IOS-XR NETCONF vs gNMI
Created by gbieli on 05-20-2022 12:16 AM
0
0
0
0
Hi, I work in a project where we have C8500/ASR1006-X with IOS-XE >=17.6 and ASR9k with 64bit IOS-XR >=7.4. I'm currently evaluating the programmability interfaces that both IOS operating systems offer. They both seem to support NETCONF and gNMI. As... view more
Looking for all interfaces from ACI nodes from API
Created by 3bruno on 05-19-2022 05:52 AM
1
0
1
0
How can I get all interfaces from a specific Cisco ACI Node (Leaf and Spine) from API? I can get all interfaces from all nodes with the following URL, but not for a specific node. /api/node/class/l1PhysIf.json?&order-by=l1PhysIf.modTs|desc&n... view more
Terraform for IOSXE
Created by Muhammad Rafi on 05-17-2022 11:10 AM
0
5
0
5
Hi All,  If you are a network engineer like me and hardly worked on the Cloud (AWS, GCP, Azzue etc) or ACI, but still like to learn the terraform, there are couple of very good providers created by Cisco individuals and by using those providers,... view more
SDWAN Infrastructure As Code
Created by apfeil on 05-17-2022 08:17 AM
2
0
2
0
I was wondering how you can manage SDWAN with IaC and stop somebody from logging into the GUI and making a configuration change. There are some obvious ways as in not giving out admin access to the GUI. However, I was wondering if there were some ways of ... view more
Ask a Question
Create
+ Discussion
+ Blog
+ Document
+ Video
+ Idea
+ Project Story
Find more resources
Discussions
Blogs
Documents
Events
Videos
Ideas
Project Gallery
New Community Member Guide
Related support document topics