OTV assumes that there are no silent or unidirectional devices:
http://www.cisco.com/en/US/docs/solutions/Enterprise/Data_Center/DCI/whitepaper/DCI_1.html#wp1185931
There are several scenarios where a silent host can cause connectivity issues. The purpose of this document is to show why traffic loss occurs during an AED failover.
(Power Point Presentation appended to this document). 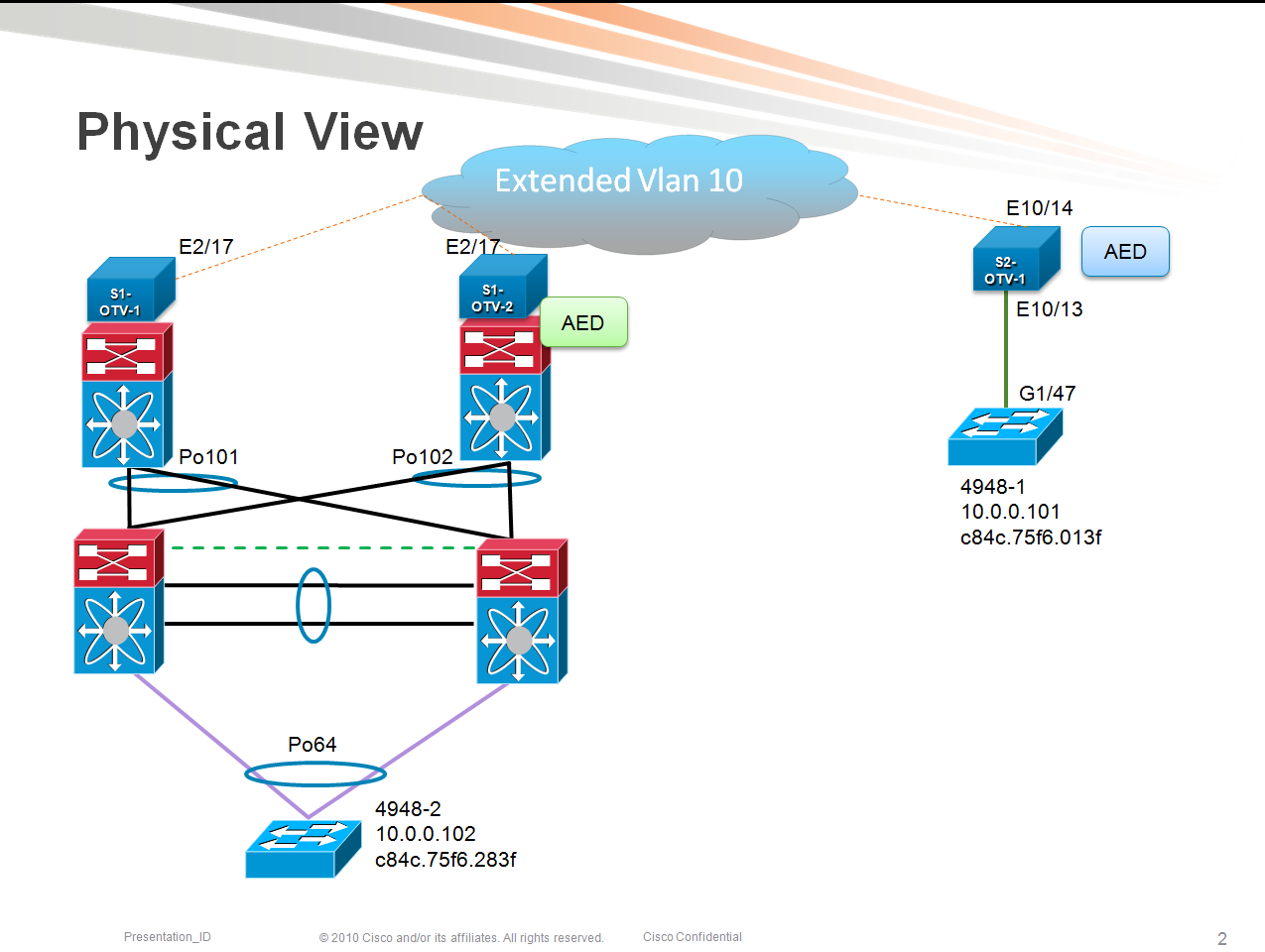 1) Before failover, traffic between hosts is working successfully. 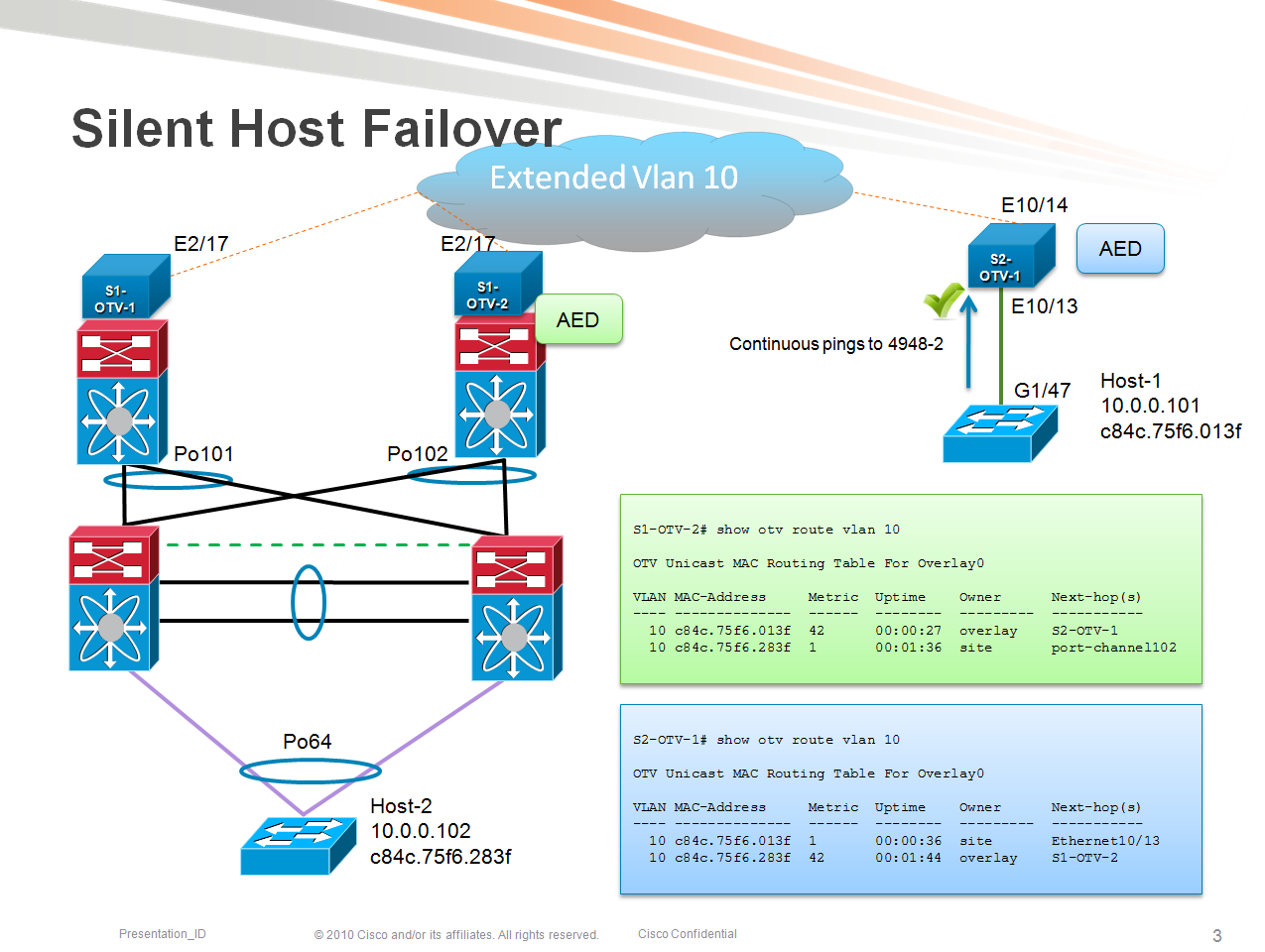 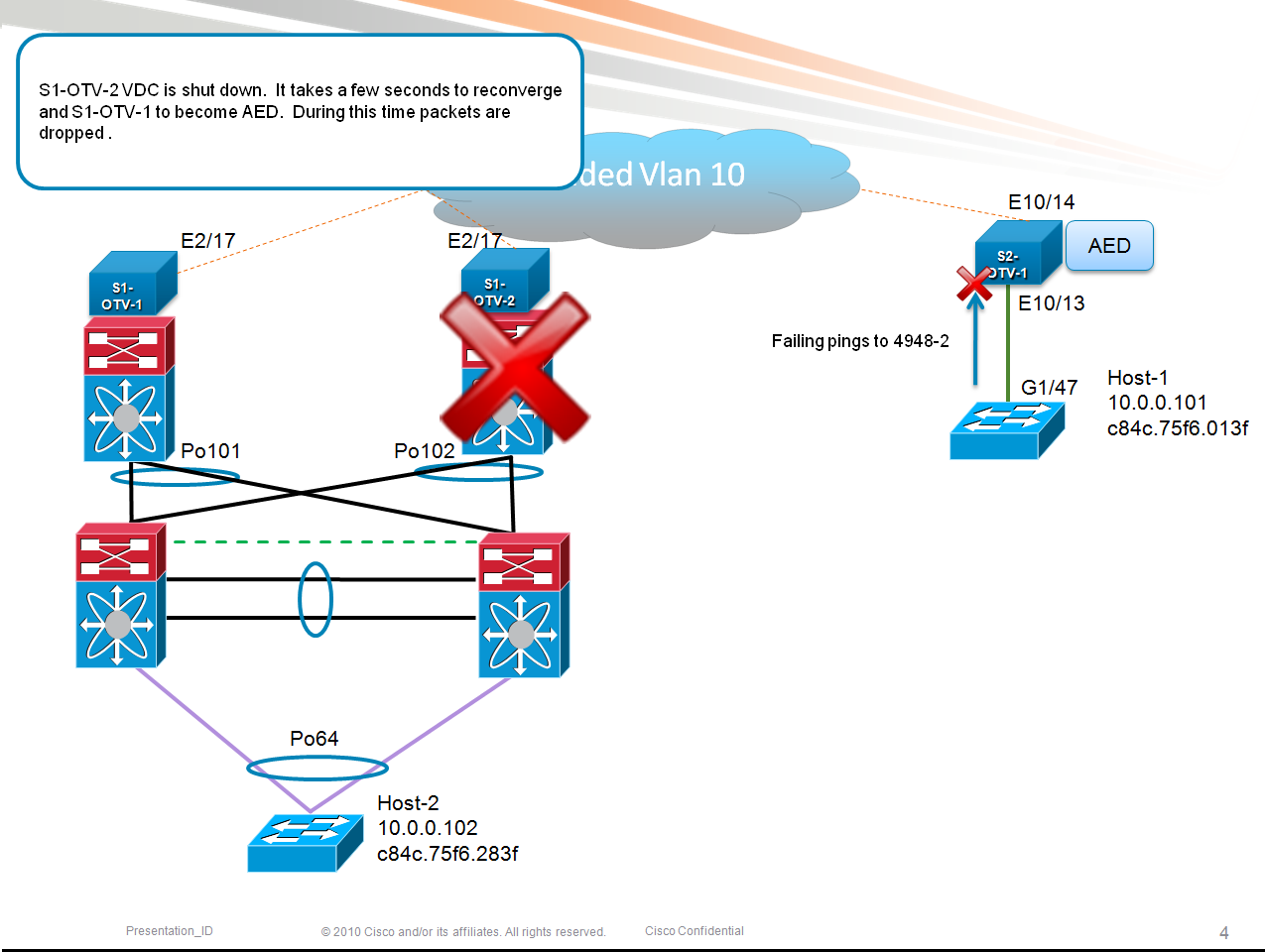 3) New AED role established for the vlan at site-1 but traffic continues to fail.  The duration of the connectivity issue can range from a few seconds to several minutes depending on the length of time it takes for Host-2 to generate a packet. 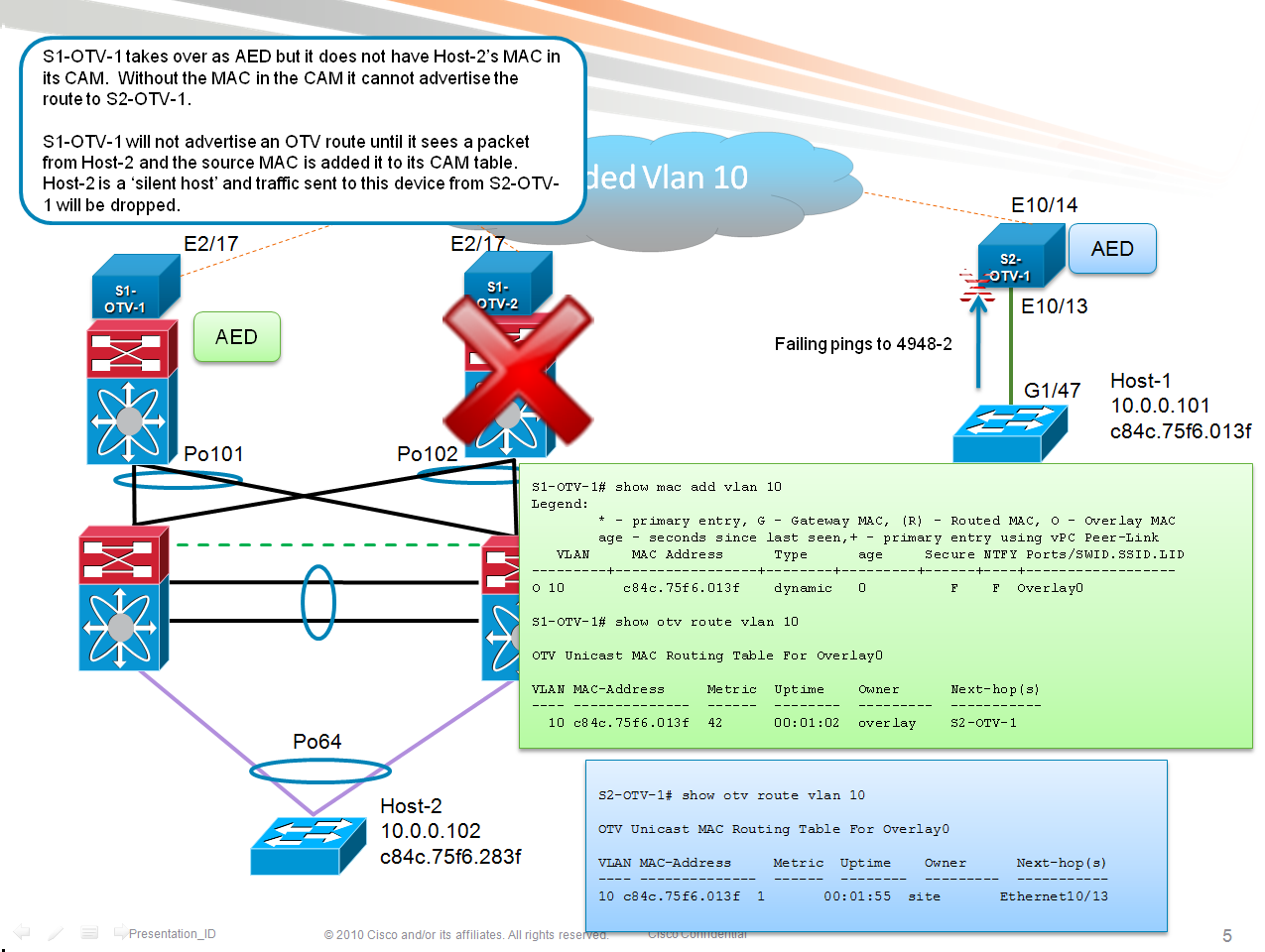 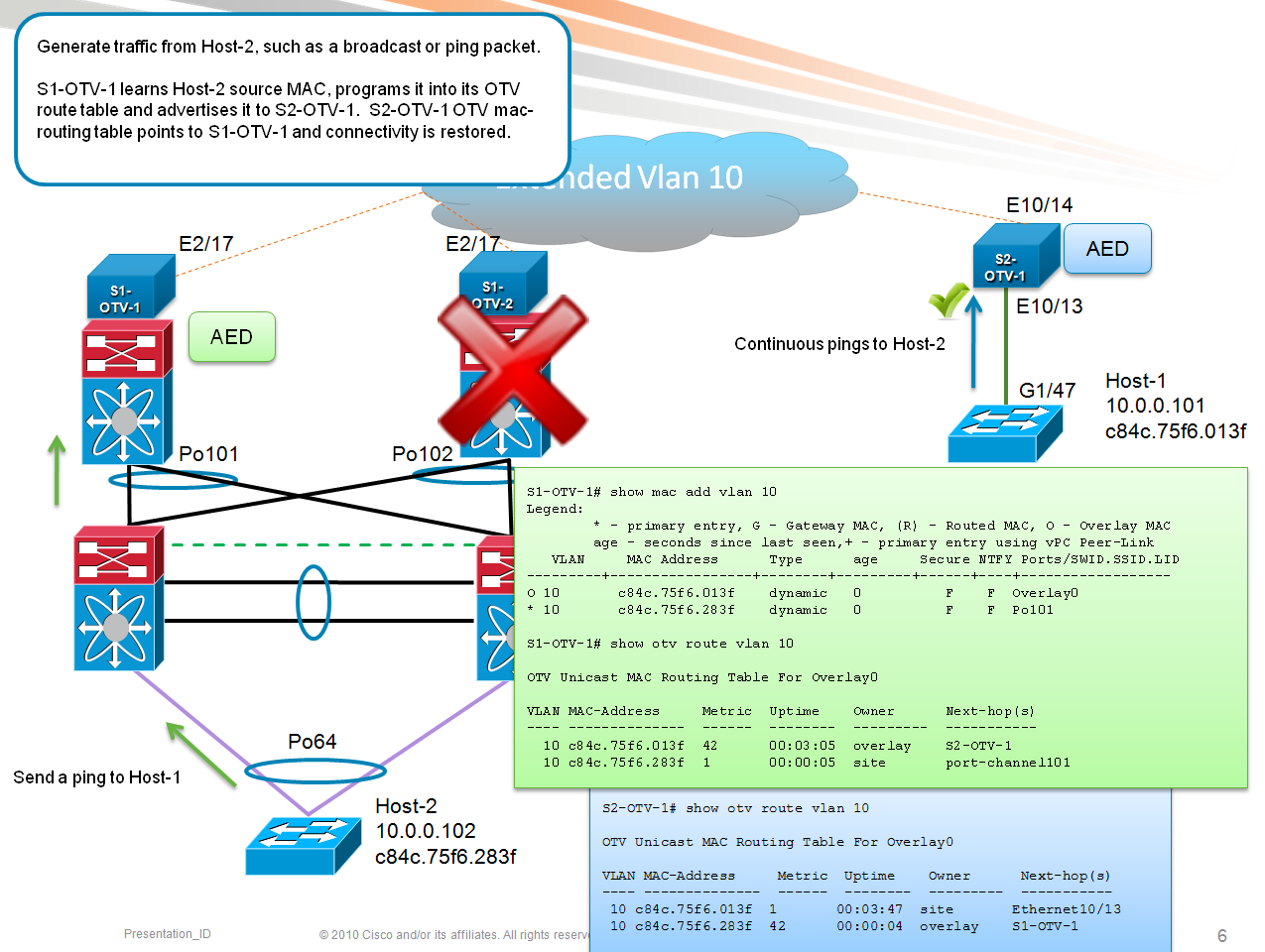 Failover scenario for between non-silent host.  Rarely in real networks will a there be completely silent devices.  Thus, failovers between AEDs converge quickly as the local MACs are relearned.  Generally, the "silent host" scenario is seen in testing environments only.

1) Before failover, traffic between hosts is working successfully. 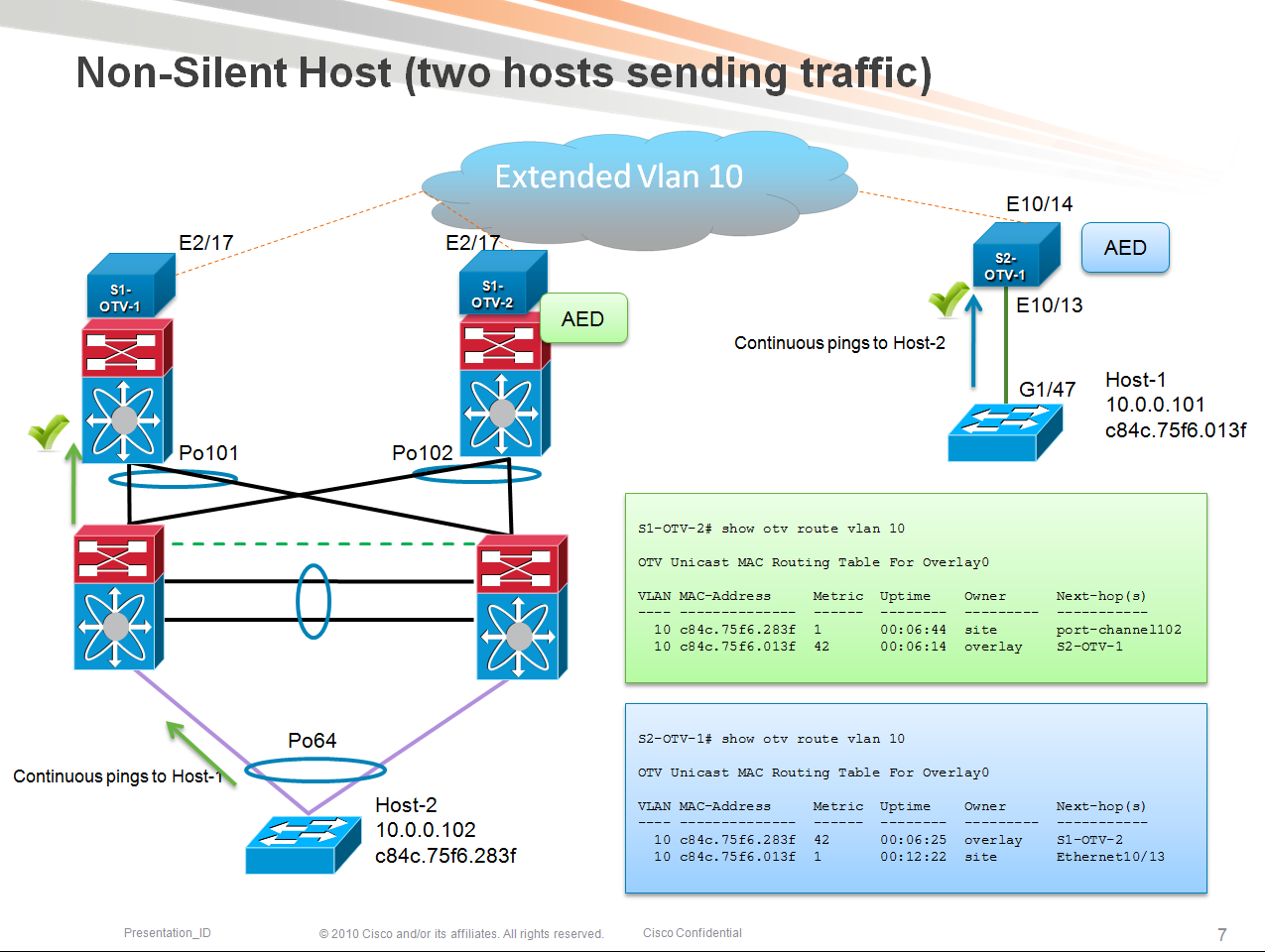 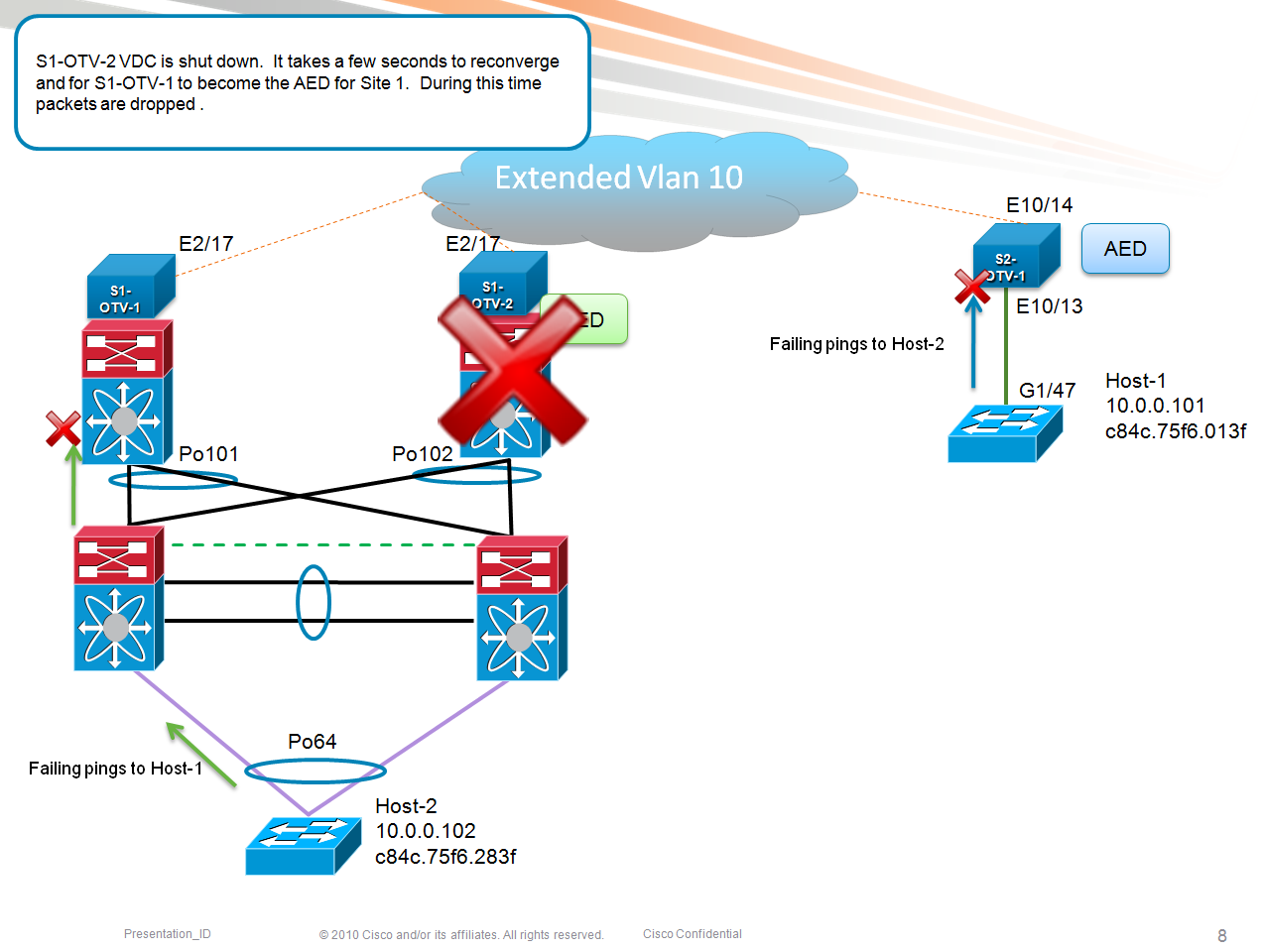 3) AED immediately learns Host-2's MAC and is able to install the entry into it's CAM and OTV route table.  It then advertises the route to S2-OTV-1 and connectivity is quickly restored.  Note that the original AED failure generates a TCN on the vlan of site-1.  Thus packets from Host-2 to Host-1 will be flooded throughout the network ensuring that it reaches the new AED. 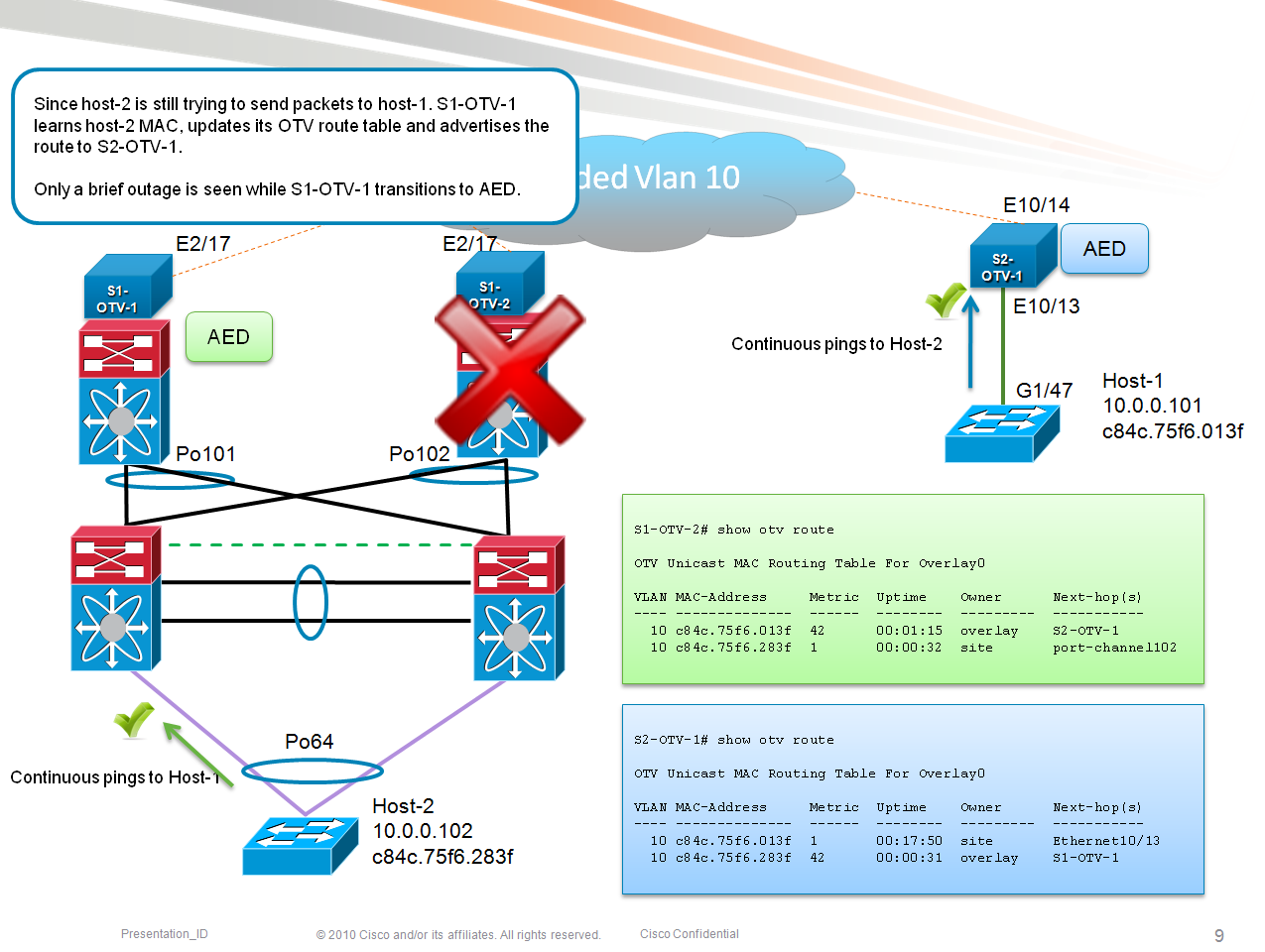 Very appreciate for the work!

are there any ways to deploy silent host in OTV?

I have created the same lab but when I drop the overlay interface a TCN is not generated so my L2 switch cam table is not updated until it ages out after 5 minutes.  Could I be missing a line from my configuration to make the TCN generate?

Latest Contents
DHCP Pool on VLAN with PC fixed address
Created by victorc7 on 04-20-2021 04:26 PM
0
0
0
0
Hello, I am trying to configure on a Catalyst 1000 switch a DHCP Server on network 192.168.1.0/24 with a fixed IP address of 192.168.1.10 for a PC Network with a specific MAC address. Here is the steps I followed :1) Type commands on Switchconf ... view more
XGPON vs. 10G Switching Network in a very large campus netwo...
Created by ezisaac on 04-20-2021 04:09 PM
0
0
0
0
I am engaging a very large new smart campus (around 10 sqm, 20 large buildings, 2 train stations, multiple bus stations, and lots of audio visual devices) network design competition recently. Some system integrator proposed the Corning One GPON/XGPON as t... view more
Catalyst 9300 and extended VLANs
Created by nat8506 on 04-20-2021 03:45 PM
0
0
0
0
If I'm currently running VTP version 1 or 2 on my network and I have a 9300 switch in Client mode, I change to Server mode and create an extended VLAN, then go back to Client mode, will the revision number increment? I can't confirm but I don't believe it... view more
Cisco DNA Software Demo Series - Cisco ThousandEyes
Created by gajewell on 04-20-2021 02:37 PM
0
0
0
0
Cisco DNA Software Demo Series - Cisco ThousandEyesRegister nowWednesday, May 12, 202110:00 am Pacific Daylight Time(San Francisco, GMT-07:00)SaaS applications and cloud-based services are increasingly critical for on-campus users, but they can be challen... view more
How do I Isolate the Source of Tunnel Flapping EIGRP
Created by tuckerrose on 04-20-2021 11:26 AM
3
0
3
0
Hi there! I am having issues with tunnels flapping across sites on our network, our network is airgapped and we use the customer's already in place network as our backbone to communicate across sites. I have combed left and right through everything I... view more
Create ContentLogin to create content
Question or Discussion
Blog
Document
Project Story
Video
Related Content
Discussions
Blogs
Events
Videos
Project Gallery
Content for Community-Ad