Cisco Community
English
Register
Login
ANNOUNCEMENT - The community will be down for maintenace this Thursday August 13 from 12:00 AM PT to 02:00 AM PT. As a precaution save your work.
RegisterLogin
Turn on suggestions
Auto-suggest helps you quickly narrow down your search results by suggesting possible matches as you type.
Showing results for
Search instead for
Did you mean:

Why is Flat Response required? How to obtain a flat response for AWGs? The principles of different proposals and the loss penalties of each proposal will be discussed in this article. 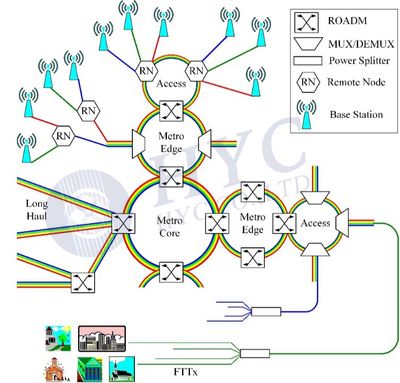 The spectral response of the TFF-based WDM devices is usually block-like due to the characteristics of TFF filters. However, the response of an AWG before optimization is usually Gaussian-type, which doesn’t meet the requirement by optical communication system.

Cause for Gaussian Passband
As we know, a standard AWG includes an input waveguide, an input star coupler, hundreds of arrayed waveguides, an output star coupler and tens of output waveguides. The wavelengths are dispersed in the output star coupler as shown in Fig.3. Different channels (λ1, λ2, λ3, …) are focused at the endface of different output waveguides, as shown in Fig.3(a). Then we enlarge one of the channels (λ3) at the corresponding output, as shown in Fig.3(b). We can see that different wavelengths (λ31, λ32, λ33) of the channel are focused at different positions. λ32 is focused at the center of the output and the best coupling ratio is obtained. λ31 and λ33 are focused at the edge of the output and experience the highest power loss. That’s to say, when we enlarge one of the DWDM channels, the edge wavelengths experience more loss than the central wavelengths. Thus the spectral response of an AWG before optimization is usually Gaussian-type.

Latest Contents
Cisco 9500 VRRP/VRRS Problems
Created by pwiscott on 08-14-2020 03:37 AM
1
0
1
0
Hi All, I have 2 x 9500's (Fuji 16.09.05), They are connected by 4 interfaces in 2 port channel group's for diversity.There are a number of vlans configured for vrrp and vrrs (see config below)Switch 01interface Vlan31description Chem-GF-Voiceip addr... view more
make disappier logging event link-status entry from running
Created by Murxy on 08-14-2020 02:46 AM
2
0
2
0
HiI am struggling with something which I belive should be easy to fix.We are running a Network with cisco C9300-24P Switches with IOS Version 16.9.4Config Template Looks like belowinterface  Gi1/0/1 description switchport access vlan 999&nb... view more
Cisco C1111-4P pair running redundancy groups - pre-empt not...
Created by telthenipper on 08-14-2020 02:14 AM
0
0
0
0
Hi,  Wondering if somebody could explain something. We have a pair of C1111-4P routers.  they are acting as a ZBFW.  We have redundancy groups configured on these routers so they act in a HA pair.  The primary router has a pr... view more
FEC: pagp_switch_port_up: no etherchnl config
Created by BorislavPenchev0962 on 08-14-2020 02:03 AM
1
0
1
0
we get this message on regular basis, 5 - 10 times a day - no issues though  FEC: pagp_switch_port_up: no etherchnl config - related to PAgP protocol, whats the possible cause ?
ISR 4351 and 4451 SM-X support for NIM
Created by PaulHS on 08-14-2020 12:03 AM
0
0
0
0
Hello, Just want to clarify: in CCW when I configure either a 4351 and 4451 ISR voice gateway, I can use the 2x NIM slots for voice cards/modules and 1x NIM for UCS-E blade. If I want the ISR to support 2x additional voice cards/modules, can I just u... view more
CreatePlease login to create content
Discussion
Blog
Document
Project
Video
Related Content
Discussions
Blogs
Documents
Events
Videos
Projects
Content for Community-Ad