VIP Advocate
In response to mediaos718

The default upgrade method, using the command you specified above, is called parallel upgrade.

The steps for the parallel upgrade process on Cisco Nexus 9500 Series switches are:

The console displays the modules with the bucket assignments and the status of the upgrade. 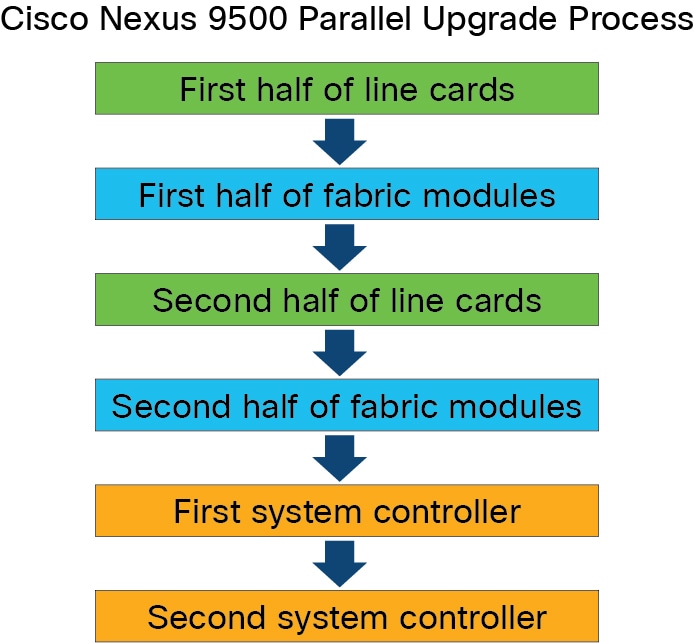 Alternative, you can add serial at the end of install all command, where which will upgrade the I/O modules in Cisco Nexus 9500 Series switches one at a time.

I would also recommend you to read the upgrade guide for the respective train release you upgrade to:

as well as the release notes of the target image:

This way you will be aware of any potential problems.

Beginner
In response to Sergiu.Daniluk

Great - Thanks for the detailed response. Do I need to copy the image in the secondary Bootflash: or Sup-2?

VIP Advocate
In response to mediaos718

Latest Contents
Data Center Knowledge Base
Created by alexstev on 06-01-2021 11:06 AM
0
5
0
5
Data Center Knowledge Base For one-on-one help with these products, you can open a ticket at https://developer.cisco.com/site/support/. For other products, please contact Cisco TAC at https://www.cisco.com/c/en/us/support/index.html   Data Cent... view more
HyperFlex 4.0 API Introduction Video
Created by jvdmade on 07-20-2020 09:14 AM
0
0
0
0
In this introduction instruction video, HyperFlex 4.0 API Explorer will be explained and how you can use the HX API Explorer to automate an application. Where to start with getting an Access Token and how to get datastores showed via API calls. CU... view more
UCSD CIDR Calculator
Created by viananth on 09-23-2015 12:24 PM
0
0
0
0
Task NameCIDR CalculatorDescriptionGets the CIDR number from a subnet mask, pretty usefull to avoid to input both when some tasksneeds the subnet mask and other the CIDR.PrerequisitesTested on 5.1CategoryWorkflowComponentsUser InputsSubnet MaskInstruction... view more
Cisco UCS for RackTables
Created by cdnadmin on 03-18-2014 01:37 PM
0
0
0
0
This blog was generated from CDN blog Created by: Jeffrey Silberman on 25-10-2012 05:55:40 PMIntroductionRacktables version 0.20.1 has new feature support for Cisco UCS environments.   Racktables is a structured and robust open-source solution ... view more
Cisco UCS PowerTool Examples
Created by cdnadmin on 03-18-2014 01:37 PM
0
0
0
0
This blog was generated from CDN blog Created by: Eric Williams on 20-07-2012 12:19:56 AMI just added a new section to the UCS PowerTool section on the UCS CDN site that will provide a central repository of PoSh scripts, examples, and videos that detail ... view more
Create ContentLogin to create content
Question or Discussion
Blog
Document
Project Story
Video
Related Content
Discussions
Blogs
Documents
Events
Videos
Project Gallery
Content for Community-Ad