Cisco Community
English
Register
Login
RegisterLogin
Options
Turn on suggestions
Auto-suggest helps you quickly narrow down your search results by suggesting possible matches as you type.
Showing results for
Search instead for
Did you mean:
346
Views
0
Helpful
0
Replies
Highlighted

What is C band and L band in WDM (Wavelength Division Multiplexing)? 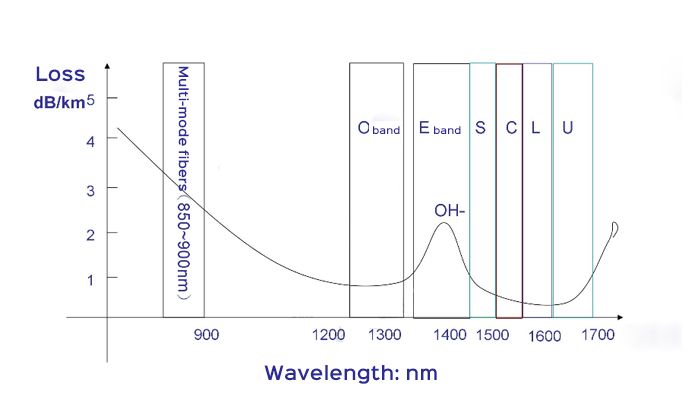 The wavelength of fiber can be divided into several bands, each band is used as an independent channel to transmit predetermined wavelength. According to the ITU-T standards, singlemode fiber with the band over 1260nm is divided into O/E/S/C/L/U six bands.

What is O band?
The O band is the original band with wavelength from 1260 to 1360nm. The O-band is the first wavelength band used in optical communications in history, and the signal distortion (due to dispersion) is minimal.

What is E band?
The E-band (extended wavelength band: 1360-1460 nm) is the least common of these bands. The E-band is mainly used for the expansion of the O-band, but it is rarely used, mainly because many existing optical cables show high attenuation in the E-band and the manufacturing process is very energy-intensive, so the use in optical communication is limited.

What is S band?
The optical fiber loss in the S-band (Short-wavelength Band, 1460-1530 nm) is lower than the loss in the O-band. The S-band is used as many PON (passive optical network) systems.

What is C band?
The C-band (Conventional Band) ranges from 1530 nm to 1565nm and represents the conventional band. Optical fiber shows the lowest loss in the C-band and occupies a large advantage in long-distance transmission systems. It is usually used in many metropolitan areas combined with WDM, long-distance, ultra-long-distance and submarine optical transmission systems and EDFA technology. As the transmission distance becomes longer, and fiber optic amplifiers are used instead of optical-to-electronic-to-optical repeaters, the C-band becomes more and more important. With the advent of DWDM (Dense Wavelength Division Multiplexing) that allows multiple signals to share a single fiber, the use of the C-band has been expanded.

What is L band?
The L-band (Long-wavelength Band, 1565-1625nm) is the second lowest-loss wavelength band, and is often used when the C-band is insufficient to meet the bandwidth requirements. With the wide availability of b-doped fiber amplifiers (EDFAs), DWDM systems have expanded upward to the L-band, and were initially used to expand the capacity of terrestrial DWDM optical networks. Now, it has been introduced to submarine cable operators to do the same thing-to expand the total capacity of submarine cables.

Due to the its low transmission attenuation loss, C-band and L-band is usually selected to use in the DWDM system. Except for the O-band and L-band, there are two other bands, 850nm band and the U band (ultra-long band: 1625-1675 nm). The 850nm band is the main wavelength of the multimode optical fiber communication system, which combines VCSEL (Vertical Cavity Surface Emitting Laser). The U frequency band is mainly used for network monitoring.

With the growth of FTTH applications, the C-band and L-band will play an increasingly important role in optical transmission systems.

Marketing at HYC Co., Ltd, a China manufacturer of fiber connectivity,WDM, PLC splitter and high-density datacom cabling over 19 years.
Labels:
I have this problem too
0 Helpful
Reply
0 REPLIES 0

Latest Contents
command over sms
Created by Daniel Frey on 09-18-2020 11:19 AM
21
5
21
5
Attached policy provides CLI access to the Cisco 4G router over text messaging.   Two files are in the attached .tar file: 1.  commandoversms.tcl 2.  PDF with instructions on how to load and use the .tcl file.
How to configure Wide Area Bonjour in SD-Access ( SDA ) with...
Created by pbagga on 09-18-2020 11:19 AM
0
0
0
0
How to configure Wide Area Bonjour in SD-Access (SDA) with Cisco DNAC 1.3.1 <placeholder>
Cisco SD-Access Multicast
Created by sandjose on 09-18-2020 11:19 AM
1
10
1
10
Introduction to SD-Access Multicast The document describes the Cisco DNAC UI workflow introduced as part of the Cisco DNA Center1.3.3 release. The document covers the components of Multicast forwarding on SD-Access fabric and the configuration pushed to... view more
Command comparison Cisco and ICX Ruckus Switch
Created by Santosh Shetty on 09-18-2020 06:07 AM
0
0
0
0
Following document covers command comparison between Cisco and ICX Ruckus.
Register Now: Networking CCP Briefings for New Product/Relea...
Created by Kelsy Tibshraeny on 09-17-2020 02:02 PM
0
0
0
0
Coming soon - Be the first to know about the New Product/Release Series. Join Customer Connection to register for the briefings throughout the month of October! Membership in the Cisco Customer Connection program is required to attend. Registra... view more
CreatePlease login to create content
Discussion
Blog
Document
Project
Video
Related Content
Discussions
Blogs
Documents
Events
Videos
Projects
Content for Community-Ad