Cisco Community present at Cisco Live EMEA 2023. See you in Amsterdam! Learn more.
Turn on suggestions
Auto-suggest helps you quickly narrow down your search results by suggesting possible matches as you type.
Showing results for
Search instead for
Did you mean:
Start a conversation
Options
917
Views
0
Helpful
3
Replies

Quick question on validating my interconnect between my legacy Nexus 7010 and new Catalyst 9600's. We have a pair of new 9600 (not in a VSS) that we are routing to our Layer 3 access layer however, we have a pair of legacy 7k's and a legacy 6509 that I need to migrate Vlans (SVI's) off of and recreate them on the 9600's.

My question is that it seems that spanning tree would block one of my links? I've included a picture that would make more sense. The image on the left is what is in production....the image on the right is what I was planning on deploying.

Any thoughts or recommendations would be appreciated. 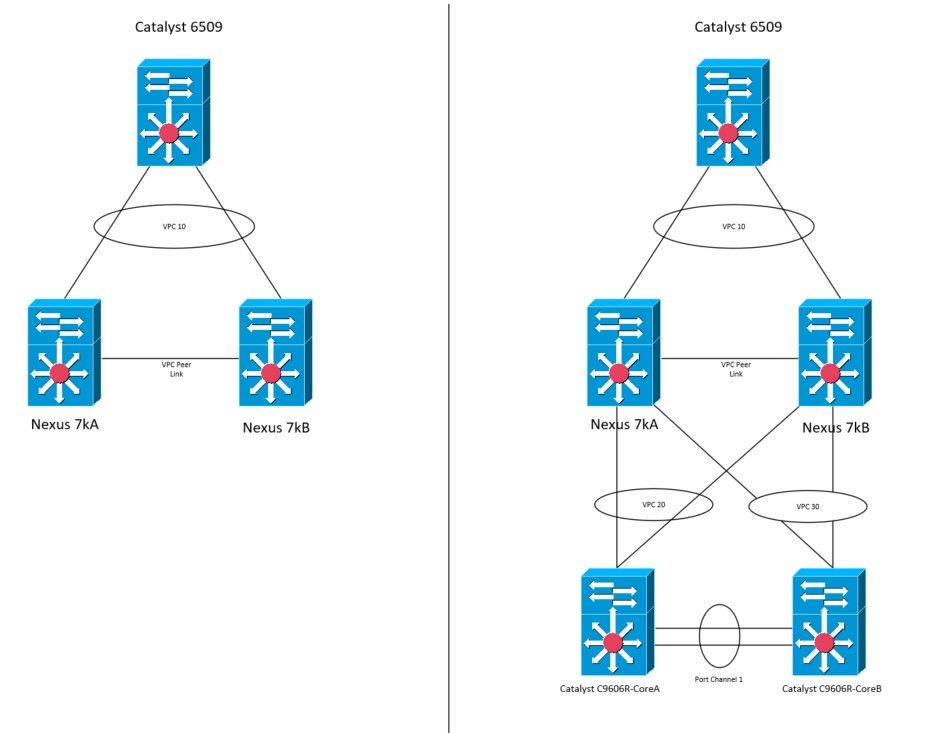 2. Is there any reason why you have not going for Cat 9600 Stack Wise virtual ?

High leve i do not see any issue with design, since you like to move your SVI to Cat 9600, So you need to extend Layer 2 till edge for visibility of Layer 3.

Moving SVI have small Interuption in the network, also you need to move your Layer 2 STP to Cat 9600 with priority.

Thinking that you are doing vPC Between Cat 9600 to nexus ( planning to decomm Nexus ?)

to answer your questions:

2. Is there any reason why you have not going for Cat 9600 Stack Wise virtual? - We wanted to put the 9600's in a stackwise virtual however, our Cisco partner told is because we only had one supervisor module per 9600 that we would not be able to do ISSU upgrades unless we had two supervisor modules per switch.

When I create the layer 2 vlans on the 9600 I was planning on also making those vlans a priority (root bridge) as I move them over to the 9600's.

Yes the goal would be to decommission the 6509 and Nexus 7k's once we move all vlans, SVI's and IDF's off those switches to the 9600's.

That make sense and that is a good approach, So for the short term even if the STP Block onside still acceptable, make sure you add more Links (if they are not 10GB x 2 Links between Nexus 7K and Cat 9600), even one side Block by STP still you have more capacity accommodate the traffic of data.

I would suggest to all SVI HSRP config done well before, and SVI in shutdown mode, Move 1 SVI At a time so you have control any issue to roll back and investigate.

Make sure you move the STP root bridge 1 change and SVI Move other change.