Aparently the Security/Compliance team didn't review my network design before it was submitted and built, and now I have to shoe horn a firewall somewhere there was never supposed to be one.

I have my two current DC Cores (Nexus 5548UP), that currently are Layer 3 only, with no L2 configuration at all.  I understand these aren't the best switches for this role, but the BoM was put in place and gear ordered, long before I came onboard, and the DC design had been completed.  From these two Cores, i connect directly to a vendor's clustered Fortinet FW, via a /30 from each core to each node of their cluster, and connected via eBGP, one link with a path prepend, due to the vendor not able to figure out how to load balance on their firewall.  Due to numerous vendor problems, and lack of knowlege, I cannot get them to change their design in a timely manner, to meet our timelines, and this has to be up yesterday to be PCI compliant (so our security people say) prior to go live in 1 week.  The vendor took 3 weeks just to figure out how to aggregate routes to me!.

So I want to drop a transparent pair of firewalls inline on the two links, but due to the Active/Standby limitation of ASA's, I am not sure this will be that easy given the /30 L3 interfaces being used.  Secondly the lack of L2 between the two upstream cores may be a concern, at least from past expiriences.  I know if I was using some other vendor's clustered FW, this wouldn't be a problem, but I definately don't want to join the Dark side again, or do I have time to procure any other equipment other than the 5520's I currently have laying around.  Someone please tell me I have overlooked something simple, and the design listed below will be simple to implement!!!! 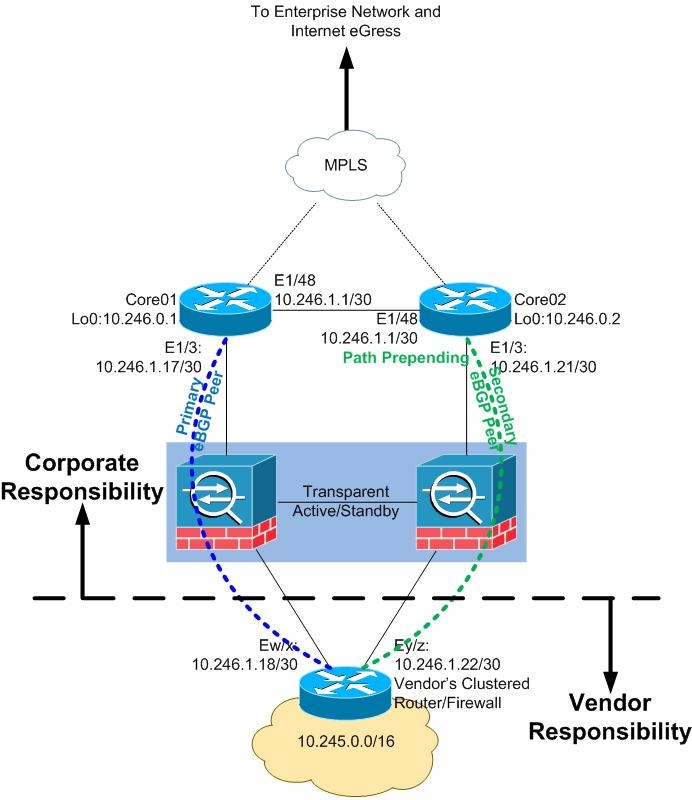 why you don't use this design:

connect the vendor clustered direct to nexus with a vrf instance, then route traffic to asa and then route to nexus whith other vrf istance.

Latest Contents
How to determine a legitimate hardware issue - Slides
Created by ciscomoderator on 05-12-2021 04:04 PM
0
0
0
0
Support Talks Slides- How to determine a legitimate hardware issue (Live event -  Thursday 13 May, 2020 at 9:30 am Pacific/ 12:30 pm Eastern / 6:30 pm Paris) This event will place on Thursday 13th, May 13 at 9:30hrs PST  Register today for this... view more
Global MPLS Design Using Carrier Supporting Carrier (CSC) wh...
Created by njrusmc on 05-11-2021 04:13 PM
0
5
0
5
Learn firsthand how I used MPLS as a core technology to solve the puzzle of connecting a Service Provider's diverse global sites in a secure, multi-tenant way. Click here to read the white paper and see the details of the complex network design that was c... view more
Cisco SD-Access Ask the Experts FAQ: Wireless in SD-Access
Created by Pulkit Nagpal on 05-11-2021 06:35 AM
0
5
0
5
Contents Support Talks Slides- How to determine a legitimate hardware issue   Here are some commonly asked questions and answers to help with your adoption of Cisco SD-Access. Subscribe to this post to stay up-to-date with the latest Q&A and rec... view more
**New Episode** Cisco Champion Radio: S8|E19: Revolutionizin...
Created by aalesna on 05-10-2021 04:13 PM
0
0
0
0
New release on Emerging Technologies and Incubation Listen: https://smarturl.it/CCRS8E19Follow us: https://twitter.com/CiscoChampion Last year, Cisco created the Emerging Technologies and Incubation organization which is on a mission to rev... view more
Cisco IOS XE Bengaluru 17.5.1a: Enterprise Routing Release U...
Created by Pradeep Chaudhari on 05-09-2021 09:36 AM
0
0
0
0
On 16th April 2021 Cisco recently announced availability of the latest release on the IOS-XE train – IOS-XE Bengaluru 17.5.1a. This is the 2nd one in the Cisco IOS XE Bengaluru release series, IOS XE 17.5.1a unlocks various routing features and ... view more
Create ContentLogin to create content
Question or Discussion
Blog
Document
Project Story
Video
Related Content
Discussions
Blogs
Documents
Events
Videos
Project Gallery
Content for Community-Ad