I am Hitesh Kumar (CCIE SP #38757) and I work for the High Touch Technical Support (HTTS) team in Cisco. Along with me Rahul Rammanohar (CCIE R&S, SP #13015), Vinay Kumar (CCIE R&S  #35210) and Ruchir Jain (CCIE R&S #26911) will be active on this thread to discuss the challenges you run into while configuring mpls vpn setup. We will try our best to resolve your queries by providing supporting documents. If needed, we can setup a live interactive session to respond to the queries based on your inputs.

Please provide your inputs/queries by replying to this discussion thread.

Many Service Providers use MPLS/VPN as a technology to provide connectivity between multiple sites for customers. We would like you to look through the topology and let us know what doubts you might have on configuring the various protocols/features, working of the various protocols in this scenario, manipulation of the traffic flows and the MPLS packet forwarding. 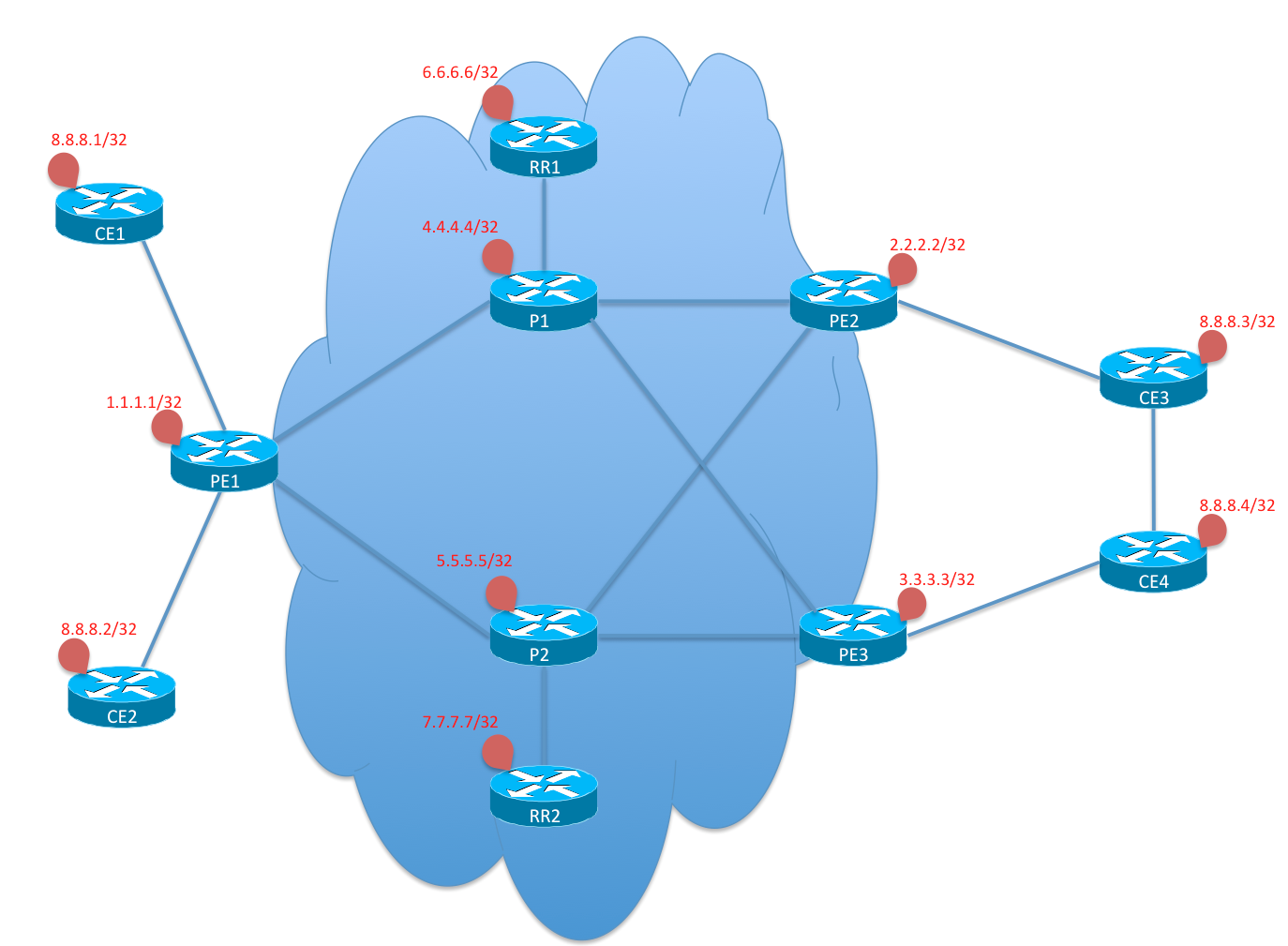 In this scenario, a Service Provider is using 7 routers of which, 2 routers are RRs, 2 routers are Core routers (P) that do not connect to any customer and 3 PE routers that connect to the 4 different sites of a customer (say ABC). Customer ABC has 2 Hub sites (on the right side of the diagram) and 2 Spoke sites (on the left side of the diagram). The hub sites can talk to each other via the service provider link or via a backdoor link. The spoke routers cannot talk to each other directly, but need to talk via either of the hub sites only. The customer has configured OSPF as the IGP within his network and the Service Provider has configured ISIS.

Labels:
Preview file
52 KB
I have this problem too
5 Helpful
Reply
5 REPLIES 5

This is very interesting session, CSC always look for innovations

ok let me do the ice breaking in this session

where to place the TE ends  between PEs or Ps ? and will be using DS-TE combined with CBTS in this case ? will the back up tunnel to be used/configured manually or automatic?

Thanks Marwan. Appreciate you starting the discussion. Please find below answers to questions you posted:

Q. If there is voice traffic need to be given priority and FRR within about 50ms using MPLS-TE FRR

where to place the TE ends  between PEs or Ps ?

In our topology if we want we would be having TE tunnels between PE devices. However, in general it

depends upon network and design requirements where we put TE tunnels. If number of PE routers are

considerable then it is easier to configure and manage P-to-P tunnels. Here is a comparison of the

1. PE-to-PE tunnels: The number of TE tunnels increase in this case but you get more control on

traffic forwarding. Also, you do not need to run LDP in core as the tunnels are full mesh.

2. P-to-P tunnels: Number of tunnels are less compared to PE-to-PE but we loose granularity in

traffic forwarding. It would require LDP over TE tunnels and you might have deeper label stack

Q. And will be using DS-TE combined with CBTS in this case ? Will the back up tunnel to be

Definitely a good option. However in our topology we have not planned to but if you have any queries

regarding it we can try our best to incorporate it.

Q. Also how and where MPLS-TE one hop primary and backup can be applicable in this topology.

We intended this topology for MPLS L3 VPN setup hence there are only two P routers. In such a

topology if we wish to use TE tunnels best would be to have PE-to-PE tunnels. The primary tunnel

can go through one P box and the backup via the other.

Q. Can we use LFA and where combined with MPLS-TE in this topology ( is it best practice )

LFA with TE-FRR can indeed be used. It reduces number of TE tunnels required but it adds another

protocol to troubleshoot which increases complexity.

Advisor
In response to Ruchir Jain

Thanks for this detailed response

We have added the configuration of all the devices in above mentioned topology based on the described scenario with PE1 being XR.

Kindly let us know in case of any queries.

Hi - would someone be able to explain the use behind the pseudo-wire control word please?