I am the owner of a small agricultural business but was a CCIE in the far past.  So, when I started my company, it was a good time to try to polish some skills.  Well, it is not like riding a bike but here is my dilemna.

I have a Cisco ASA5505 with Frontier ADSL.  I broke into their crappy little modem and obtained the settings needed to replace their modem with a 2621 router with a WIC-1ADSL module.  I have a static IP from Frontier which is on my ASA5505 and the Dialer interface on the 2621 gets its address from Frontier via DHCP.  There are devices behind the ASA which I need access while in the field, IP Cameras, Seed Treater, etc., so I have Anyconnect running on the ASA and can access everything from my laptop, iPhone and iPad from whereever.  The issue arises when my laptop is in house and communicating with my parent company and I try to make a cell phone call off the network extender.  The call is choppy since there is no QoS and the data is strangling the voice.  Since I have control over the 2621, I added another network and NAT it into Frontier without them knowing.  I have since placed the network extender on this network as well as a WAP200 that is wide open for my customers when they are in the office.  Doesn't fix the problem but...

I have now added Evertek Wireless internet with a static IP also but they use a reservation based on the MAC Address of my interface of the ASA.  This plugs directly intot the ASA via ethernet (I would assume their antenna is just a wireless bridge).  I set route tracking on the Evertek side and use the Frontier as a backup and all devices on my NAT network still funcion on Frontier DSL and all my nornal data traffic is out Evertek.  The issue is that the Evertek Wireless is not very fast or reliable (today in during a snow storm, it could barely keep an internet connection).  And I had a problem with Anyconnect using either connection.  With some help from another post, I got that working.  But think that the "ip address x.x.x.x y.y.y.y dhcp setroute" on the Evertek side messed things up from a routing standpoint when I would connect from the outside on the Frontier side.  For testing, I switched the tracking around and now the connection on the Frontier side does not work but that is besides the point.

Frontier is going to try out an ADSL/2 connection next week which brings up another issue; all Frontier connections come into my buidling on a single 4-pair wire so if they go down, all my internet except the Evertek goes down.  I have a Raven Slingshot coming for installation shortly that cannot go down; it will provide RTK (sub-inch accuracy GPS) to my customers that have auto-steer and auto-shutoff capabilities in their tractors via cellular data modem.  So, while they are planting their crops in the field, if my connection goes down, their tractor will not function.

I also had a Cisco UC320W but it died a few days after it went off warranty so I replaced it with a Dell Server running 3CX IP PBX that supports Cisco SPA525G2 and SPA501G IP Phones.  There is a 3CX iPhone app that allows me to receive calls while in the field, it uses a proprietary tunnel that I have open on the ASA.  With 4-pair coming into my building, I will be left with a single 1-pair for phones so I am considering a SIP provider instead.

Here is a diagram of what is setup with a future connection.  I am just trying to figure out the best way to keep a few of the devices active all the time. 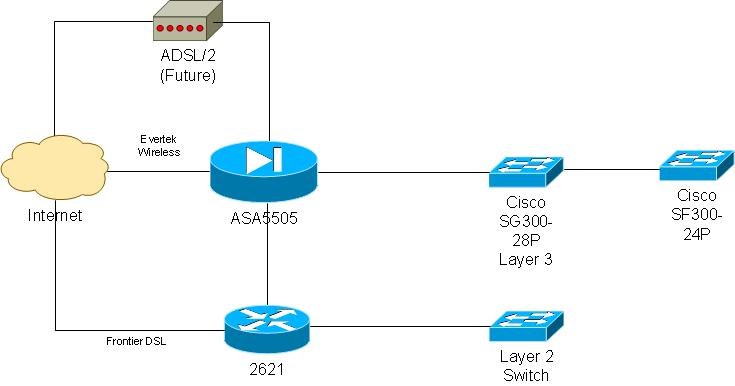 ASA is not very good for handling redundant Internet links. Use only router instead, but not so old as a 2621. That will also make ASA, and its many limitations, unnecessary.

Thanks Peter, I actually got side tracked in technology for 17 years and went back to agriculture. :)

So, if I install a 2901 with a HWIC-1ADSL interface for my current DSL, a HWIC-1ADSL-M ( or whatever type of ADSL/2 Frontier supplies me) for the new DSL, one ethernet to the ASA and one ethernet for NAT'ing a network into all and just have an intermediate network between the 2901 and the ASA5505 and use the 2901 for all routing?