This one has stumped me for quite some time - long enough for me to go to the effort of actually doing some documentation!

In a pinch, I need to do hairpin NAT from the internal VLAN 1 hosts, to the external NAT addresses on two of the links.  This gets complex, because there's policy routing in the way and a few other limitations that seem to break anything I try. 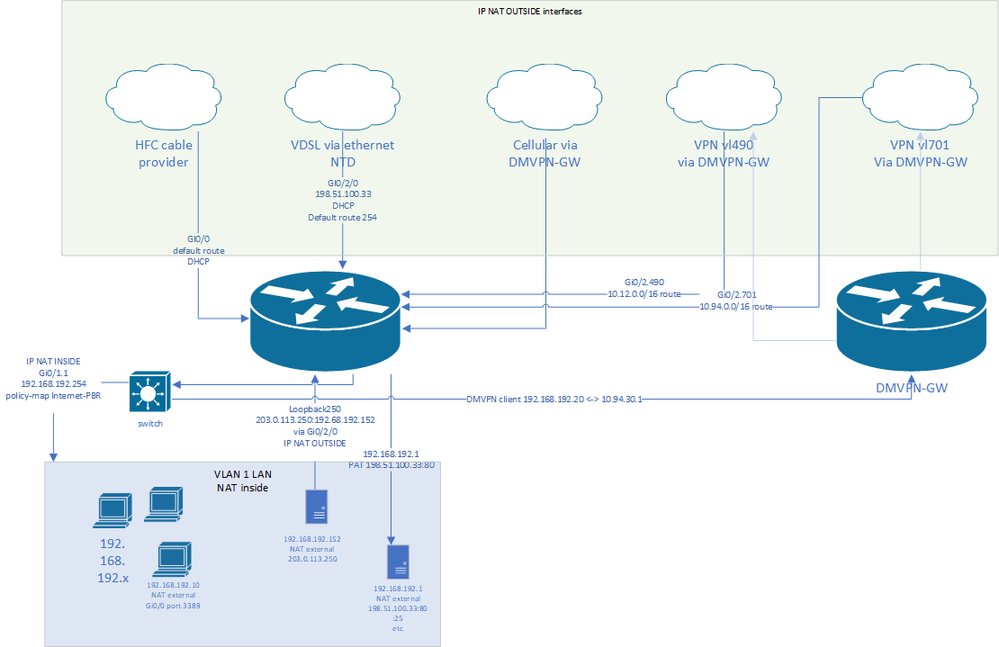 Gi0/0 is the default route.

Gi0/2/0 is policy routed based on source address (VDSL via ethernet NTD)
Gi0/2.761 is a cellular connection I use for failover if the primary link or links go down.

The ISP on Gi0/2/0 has an address presented as a framed route. This lands on Loopback250 and is used for static NAT to a server.
The primary address on Gi0/2/0 is PAT with PAT translations pointing to various servers and client that have specific port forward requirements.

NAT runs on all of the above as a NAT outside.

In order to run NAT on all these interfaces, I use policy maps:

All of these look the same:

I have a policy map:
==
! Set any traffic to the DMVPN headend to go out the primary WAN. The DMVPN headends for this box reside on the /16 that routes via the DMVPN interior, so I need to ensure traffic goes around it or else the DMVPN tunnel won't come up.

route-map Internet-PBR permit 9
match ip address work-headend
set interface GigabitEthernet0/0
!
! If these are work VPN addresses, cease processing PBR in case we want a host to still see the work vlans but not be policy routed by rule 12.
There are multiple interfaces, so a "set interface" will not work.

! LTE tertiary WAN path. Force hosts out this link by adding them to the LTE-Bypass ACL.

ACL for traffic going over the second link:

Problems (in order of pain):

1. I can't get NAT hairpin to work. I've attempted using policy maps and a loopback interface with NAT outside configured but this doesn't seem to take effect. I've also attempted NVI NAT, but this broke my ability to NAT in from the outside using multiple interfaces at once (couldn't figure that out). NVIs also don't seem to be supported with IOS-XE, so I can't migrate to a 4000 series in the near future without getting this right.

It gets the IP address of the last interface that requested a DHCP address, even though I have specified the interface. Is this by design or a bug?

Hello
I can see you have NAT and PBR on multiple interfaces but tbh it isn't clear on what your trying to hairpin?