Cisco Community
English
Register
Login
Great changes are coming to Cisco Community in July. LEARN MORE
RegisterLogin
Options
Turn on suggestions
Auto-suggest helps you quickly narrow down your search results by suggesting possible matches as you type.
Showing results for
Search instead for
Did you mean:
563
Views
0
Helpful
5
Replies

our network has simplified the following topology: Customers are connected via a switch which is in turn connected to NX-3172PQ. This switch has several vlan interfaces. A DHCP running its service in a different network, so there is a need for a dhcp relay agent. This is configured on this Nexus on all is operated as expected. 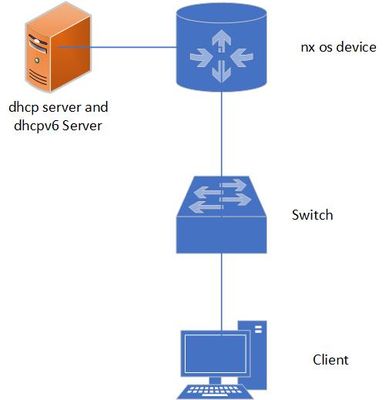 Now we want to implement ipv6 as dual stack but the ipv6 relay on the nexus didn’t work as expected because no packets are forwarded towards the dhcpv6 server. The configuration is listed below.

DHCPv6 Relay is configured on the following interfaces:

Even with several debug command and the use of ethanalyzer I didn’t find out why this feature don’t work. It seems that no traffic is proceeded by this nexus device.

Digging deeper into this issue I found out, that the interface is not listing for multicast traffic to the well know addresse of All_DHCP_Relay_Agents_and_Servers (FF02::1:2). The output of “show ipv6 interface vlan 100” is listed below.

If I configure a device running ios or ios xe with a dhcpv6 relay agent I can observe, that this interface is listing to the multicast address FF02::1:2.

Loopback1 is up, line protocol is up

even if the interface is not listing to the multicast address, so I configure another relay agent in the same network as the clients to relay dhcpv6 packets to the unicast address of the nexus device.  Now, the nexus device work as a relay agent and encapsulate the reply forward packet into his own reply forward packet and delivered this package to this dhcpv6 server.

My question is, if this behavior is expected. Is a nx os device only capable of relaying unicast dhcpv6 packets or have I miss any configuration to make this scenario work with multicast as well?

We solved this issues by upgrading to a new version (nx os 9.2.2) now the relay agent is working as expected.

Many years have passed since I last configured IPv6 on a Nexus, but the following command was required to get multicast to behave in a sane manner:

The command can be issued per-VLAN so it a be tested in isolation.

Beginner
In response to Seb Rupik

Hey thank you for your replay,

even if this command exists in the documentantion (https://www.cisco.com/c/en/us/td/docs/switches/datacenter/sw/5_x/nx-os/multicast/configuration/guide/n7k_multic_cli_5x/igmp_snoop.html) it is not avaible at our device.

Cisco Employee
In response to MHasart

Can you try configuring the same command, but in global mode.

Beginner
In response to Harold Ritter

Hey, i've had the same idea in mind but unfortunately it is also not avaible.

Btw, we are using this device for ipv4 multicast without any known problems.

We solved this issues by upgrading to a new version (nx os 9.2.2) now the relay agent is working as expected.