Cisco Community
English
Register
Login
Join the Webex special event conversation for a chance to win NEW Webex swag!
RegisterLogin
Turn on suggestions
Auto-suggest helps you quickly narrow down your search results by suggesting possible matches as you type.
Showing results for
Search instead for
Did you mean:
Announcements

CSM of the past

Cisco Security Manager (CSM) is a Security Management platform that runs on a server and is used to manage security devices. Its earliest version was CSM 3.0 that came out in 2007, with its successors being 3.1, 3.2 and 3.3. Recently CSM 4.0 was released and the product is still being developed and improved with extra functions and futures. The platform was initially envisioned to work as a general security management tool that would enable an administrator to manage his firewalls through a graphical interface that resides on a central server. The CSM database would "know" about all the security devices and their configurations. It was designed to be able to deploy to multiple firewalls at the same time based on the configuration changes on each one. It also introduced a number of useful features that had to do with saving configuration time by sharing policies and configurations amongst multiple devices. The ability to manage multiple security "boxes" is what made CSM popular amongst security administrators.

Previous CSM versions supported a number of product features, devices and versions and security functions that were less than those CSM 4.0 can support. They sometimes suffered from bugs that were fixed with service packs introduced in each version. As time went by there were also some functions that administrators were looking for from the product. These could include newly developed security features on IOS routers, new firewall features on ASA/FWSM firewalls or new software versions. CSM 4.0 tried to integrate all the above. There were also more drastic design changes that had to do with CSM being able to collect and report on syslog messages, being able to not only deploy to multiple devices, but also import them in CSM database and more. These features were not supported in 3.x CSM versions. CSM 4.0 is the version that passed the CSM product to a new era, that goes beyond just management. It introduces error message monitoring and reporting and we can say that it is on its way of becoming the ultimate security management and monitoring platform for Cisco security features and devices. More functionality is in the pipeline...

The Release Notes that include the requirements and the new functionality introduced in CSM 4.0 are:

CSM 4.0 and 4.0.1 introduce a number of new features that did not exist in previous versions that are presented here:

Probably the most drastic and useful change is that CSM  can now collect syslogs and the GUI gives the user the ability to query and filter on these logs. That functionality requires the security device to send logs to the CSM server. That feature is equivalent to logging and syslog filtering in ASDM for ASAs/FWSMs with more enhanced features. The tool that is used in CSM to view and filter on events is called Event Viewer. 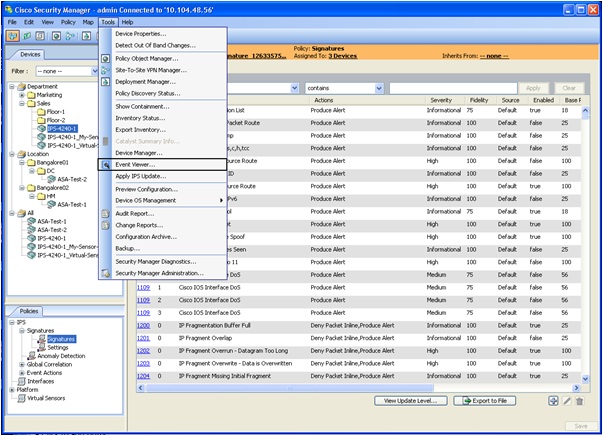 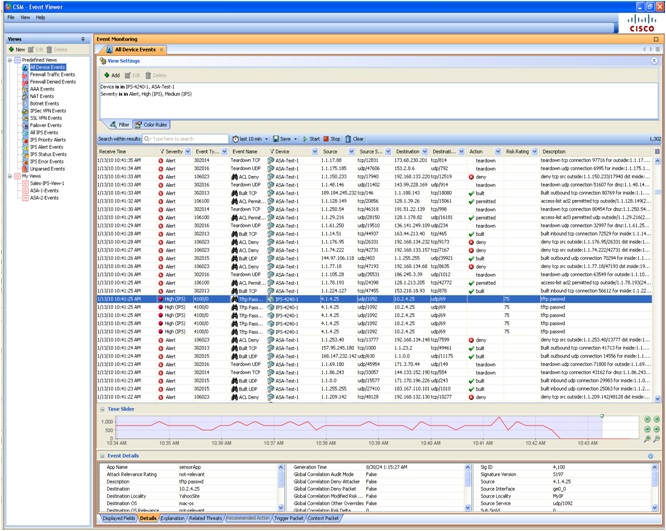 CSM can now dig down in an alert (firewall or IPS) and identify the policy that it came from. 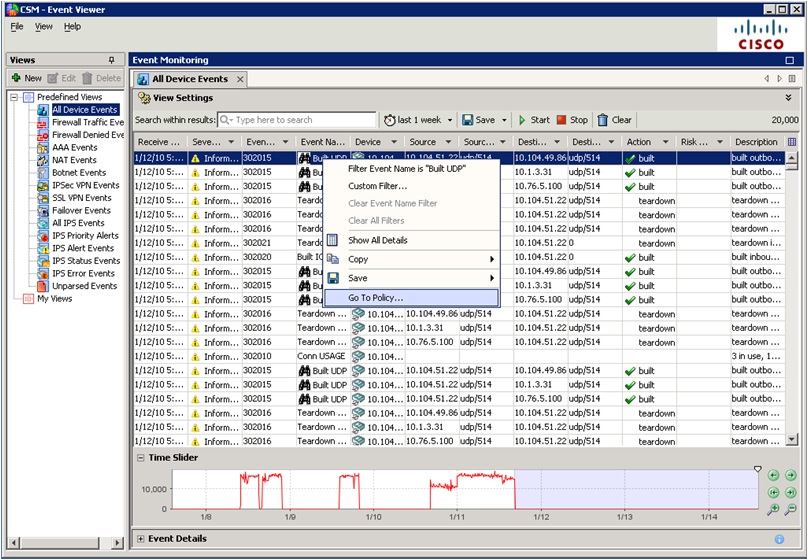 CSM can now detect Out Of Band (OOB) changes. Out of Band changes refer to the CLI changes made on a managed device outside of CSM i.e. after the last discovery/deployment/rollback. Hence Out of Band Difference is always calculated between the last live discovered or deployed/rolled back configuration stored in CSM (from Configuration Archive) and the current configuration on the device. Prior to CSM 4.0  Out of Band changes detection always happened during deployment, prior to pushing the changes to the device. In case Out of Band changes were detected, the deployment used to proceed/fail based on administration settings which allowed the options Warn, Cancel, Skip. In 4.0 the user can use the OOB tool to check for OOB changes on any device. 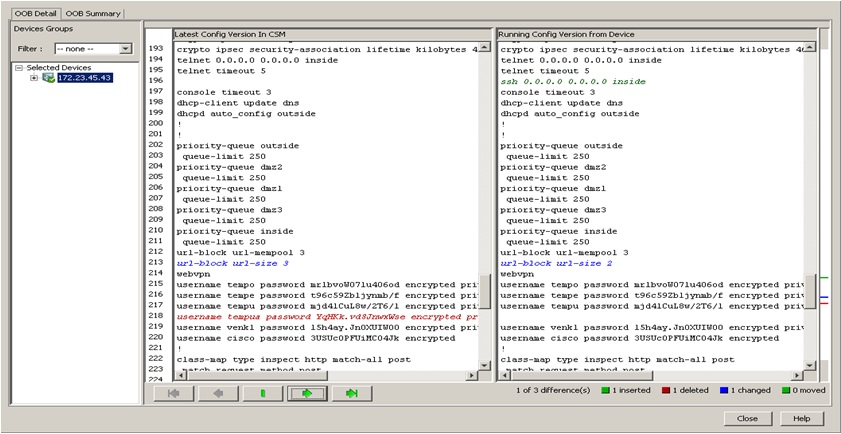 Users will need a new licenses for CSM 4.0 irrespective of whether they have a valid license for any of the older CSM 3.x releases. Existing CSM 3.x licenses will no longer be valid in CSM 4.0.

The enhancements and improvements introduced are:

Some key processes of CSM can now run as 64 bit processes on Windows 2008, that increases the memory space available and improves performance. 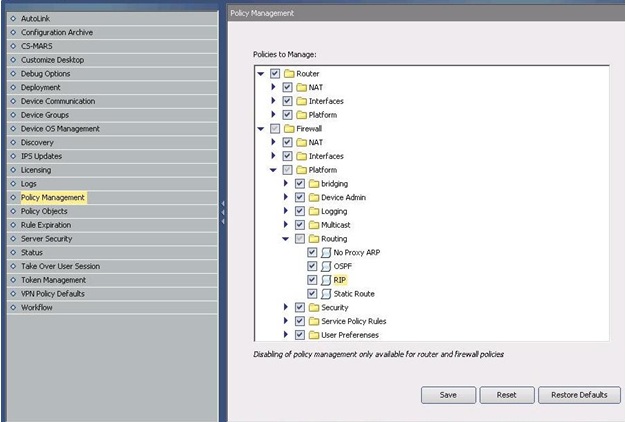 Packet Tracer is a feature of the ASA that shows how a packet would be processed when hitting the firewall. That feature can now be used in CSM.

If you modify a signature policy with more than one tuning contexts, Security Manager can now copy the policy to other contexts when appropriate and with your permission.

The changes between 4.0 ad 4.0.1 are minor and mainly refer to newly supported versions and devices:

Can anyone let me know -

i) I can't see my firewall report in reporter, whether i can see the IPS.

Are you sending syslogs from the firewall? For example can you see firewall events from it?

CSM needs to see the logs in order to provide reports.

One more thing, How can i scheduled backup for - log of ASA & IPS ?

If this doesn't work, please ask in the Security > Nework Management community forum and they should be able help you further.

Hello... I am trying to add a pix firewall into the CSM server but I am getting an error saying "The Security Manager server and device could not negotiate the security level. Please generate a new certificate on the device and retry the operation." Not sure how to resolve this issue.

It is probably because your self signed cert on the PIX has expired. You can try to generate a new one on the PIX and see if CSM can import it.

I hope it helps,

Thank you very much PK for the very prompt response.

will try to look into this.

Do you have any information about support of ASR1001?

This scenario crops up when multiple firewall (mutually indipendent) use same set of network/port objects need to be integrated to CSM.

Is there a way to detect duplicate objects/groups...

Latest Contents
Firepower (ISA3k) lost FMC connection after power cut
Created by Oleksii Maksymov on 06-14-2021 07:02 AM
0
0
0
0
Hello all!I have a couple of ISA3k devices, which have lost FMC connection after losing power.More than that, they show no FMC configured at all:> show managersNo managers configured. But if I try to add one it reports DB loss:> configure manag... view more
Firepower 4110 (6.6.0) - Error message: High unmanaged disk ...
Created by swscco001 on 06-14-2021 06:34 AM
1
0
1
0
Hello everybody, newly our customer get the error message in teh FMC Health Monitor: High unmanaged disk usage on /ngfw /ngfw using 85%: 106G (20G Avail) of 126Gon both Firepower 4110 of a HA pair (see attached screen dump). My qu... view more
Cisco ISE USB Mass Storage Block
Created by SHABEEB KUNHIPOCKER on 06-14-2021 06:14 AM
1
0
1
0
Hello,Our customer wants to block connecting USB devices to their laptops using ISE. I know that there is a usb condition that we can use in posture policy. If I use that option, suppose a laptop connects to network without a USB mass storage device then ... view more
Strange after-auto nat behaviour when using "any" as source
Created by Chess Norris on 06-14-2021 05:56 AM
0
0
0
0
Hi,I was working on an issue a customer of mine had with NAT. The customer decided to tunnel all remote VPN and have the traffic u-turn on the outside interface. I created a nat (outside,outside) rule for this like I've done many times before for customer... view more
FMC Scheduled Backup Failing
Created by jmeetze80 on 06-14-2021 05:42 AM
1
0
1
0
I've scheduled a weekly backup on my FMC to run every Sunday at 8 PM and for some reason, it always fails with the message, "Failure: Remote storage is enabled but not mounted."  If I run the backup manually, it will backup the appliance fine so I kn... view more
Create ContentLogin to create content
Question or Discussion
Blog
Document
Project Story
Video
Related Content
Discussions
Blogs
Documents
Events
Videos
Project Gallery
Content for Community-Ad