This interesting concept is discussed in many vendors courses, blogs and forums and this additional article I wrote is to demystify it with packet captures and simple words.

See below interesting details about NAT Traversal In IPSEC VPN.

IPsec uses ESP to encrypt all packet, encapsulating the L3/L4 headers within an ESP header. ESP is an IP pro

tocol but there is no port number (Layer 4). This is a difference from ISAKMP which uses UDP port 500 as its UDP layer 4.
Because ESP is a protocol without ports and at the other side the L4 information the , The NAT device can not change these encrypted headers and cannot perform PAT translation at the L4 level.

Below the telnet packet captured from PC-1 to PC-2, the Source port 30206 and the Destination Port 23 are encapsulated by ESP and both are encrypted. (I decrypted the packet to see how it looks the packet inside ESP after decryption at the RTR-Site2.

Without NAT Traversal and new UDP Encapsulation of ESP packets with source port 4500 and destination 4500, the NAT Device cannot do anything.
It is clear NAT and IPSec are incompatible with each other, and to resolve this NAT Traversal was developed. NAT Traversal adds a UDP header which encapsulates the IPSec ESP header. As this new UDP header is NOT encrypted and is treated as just like a normal UDP packet, the NAT device can make the required changes and process the message,

Step-1: Detects if both VPN Devices RTR-Site1 and RTR-Site2 support NAT-T
Step-2: Detects if there is a NAT device along the path. It’s called NAT-Discovery.

If both devices support NAT-T, then NAT-Discovery is performed in ISKAMP Phase 1 through messages three and four as shown below.

How the VPN Devices RTR-Site1 and RTR-Site2 detect that there is a NAT device? 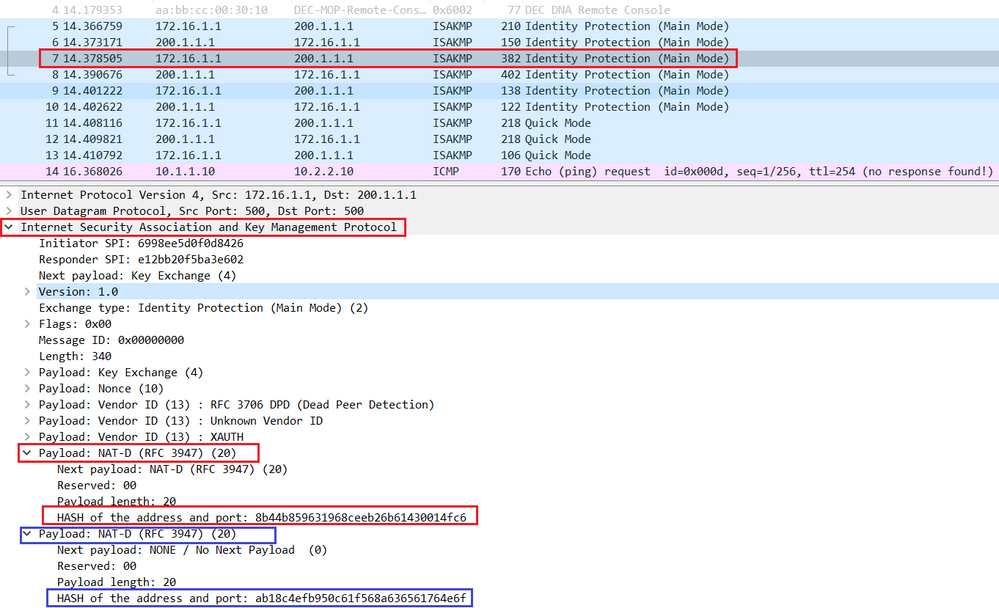 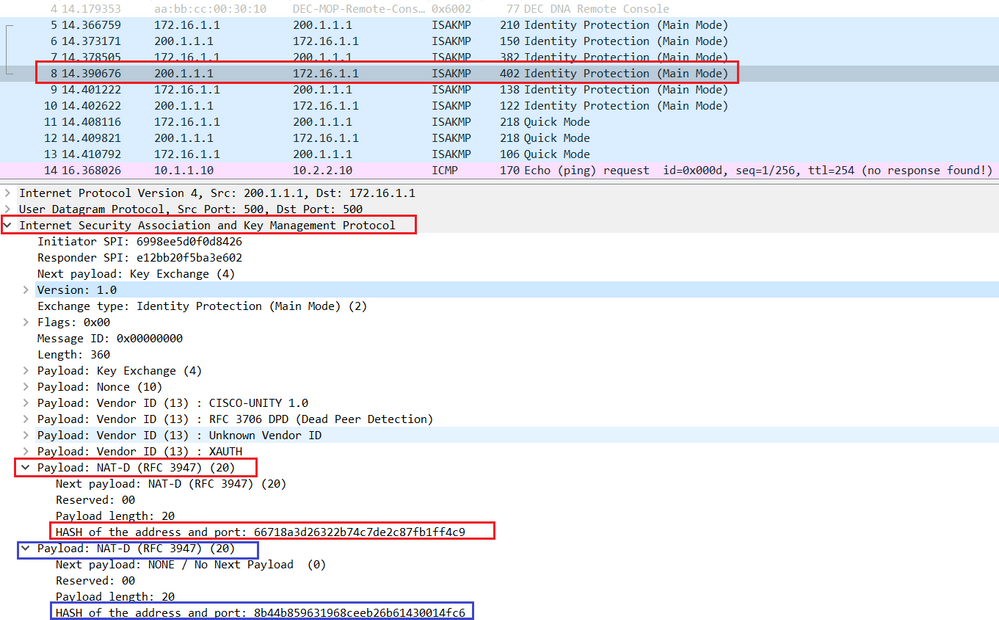 Now RTR-Site1 and RTR-Site2 agree that a NAT Device exists along the path.

Now the NAT Device is discovered, still in the IKE 1 phase 1, RTR-Site1 will change the UDP port 500 to UDP port 4500 as shown below in messages five and six.

Because the NAT-T, in IKE Phase 2 (IPsec Quick Mode) encapsulates the Quick Mode (IPsec Phase 2) inside UDP 4500 . After Quick Mode negociation is completed, the Phase 2 is now ready to encrypt the data and ESP Packets are encapsulated inside UDP port 4500 as well, thus providing a port to be used in the NAT device to perform port address translation.

Latest Contents
Current vs Old Anyconnect License on ASA 5585-x
Created by awilliams3 on 05-25-2022 09:55 AM
3
0
3
0
I am looking into purchasing a ASA 5585-x with ssp 60 and 10,000 Anyconnect Premium Peers. If these are an Anyconnect Premium license instead of an Apex will it not work? Or will it have less features. I have tried searching on the subject but there is a ... view more
Cisco ISE along with SCCM
Created by Amr Moussa on 05-25-2022 09:36 AM
2
0
2
0
We have already Microsoft SCCM and we have Cisco ISE, our design now is built on MAB authentication, but we need now to move to DOT1X, the problem we see is that we use SCCM to deploy Windows images to the new machines so they will be just a bare metal wi... view more
ISE rejects .1X authentication for Cisco IP 6921
Created by ivan.kuzenkov on 05-25-2022 07:51 AM
1
0
1
0
Dear community, Has anyone faced the issue with 802.1X auth for cisco IP phone 6921? I ran into this problem a few weeks ago, already 3 devices of this model stopped authentication via NAC, and I can't find the reason behind this issue. I know that 6... view more
FTD Alerts
Created by ethutchinson on 05-25-2022 07:01 AM
0
0
0
0
I have just finished setting up and migrating from ASAs to FTDs. I want to setup hardware alerts that would let my team know if there is a hardware issue with either of my FTDs. They are in an HA pairing. What would be a good set of alerts to setup? In th... view more
At sign is not displayed on the AnyConnect home screen
Created by eperezb on 05-25-2022 05:59 AM
0
0
0
0
Hi team, one more question, when the DUO screen is shown in the mail part, we can't put the @, we have to copy and paste from a notepad, is there any way to correct this?this happens on all pc devices when opening anyconnect , it doesn't let you put the @... view more
Ask a Question
Create
+ Discussion
+ Blog
+ Document
+ Video
+ Project Story
Find more resources
Discussions
Blogs
Documents
Events
Videos
Project Gallery
New Community Member Guide
Related support document topics