Secure VPN remote access historically has been limited to IPsec (IKEv1) and SSL.  These were supported using the "Cisco VPN client" for IPsec based VPN and Anyconnect for SSL based VPN.  Each of those products only supported their own protocol however with the introduction of Anyconnect Secure Mobility Client 3.0, the client can now use IPsec (IKEv2) or SSL for the transport of the VPN connection.

For SSL based configuration of Anyconnect reference http://www.cisco.com/en/US/products/ps6120/products_configuration_example09186a00808efbd2.shtml

The remainder of this document will discuss the steps to configure an ASA to support Anyconnect clients using IKEv2.

It is possible to configure the setup either through ASDM or via the CLI.  Using the former is the easiest and is listed below along with the CLI commands that are generated.

3)     Configure a name for the tunnel group - RemoteAccessIKEv2 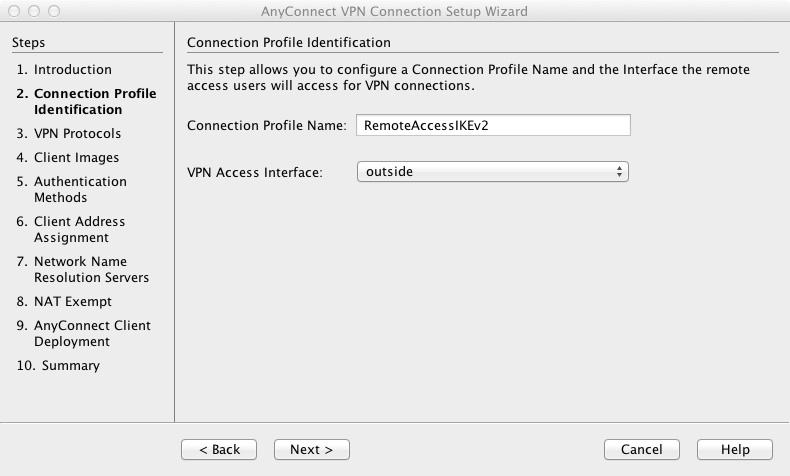 4) Configure the connection protocols.  It is possible to have both SSL and IPsec connections on the same tunnel group however in this example only IPsec will be selected.

5) Upload Anyconnect images to the ASA for each platform that need supporting (Windows, Mac, Linux)

6) Configure the user database.  If using the Local database users can be added/removed here.  If using a remote authentication server configure a new "AAA Server Group" by clicking on the "New..." button.

7) Create a pool of addresses that will get assigned to the vpn clients.

9) Allow the VPN traffic to be exempted from NAT when accessing the internal network.

10)  Turn off Web Launch.  This is optional and would require the client to be pre-deployed (much in the same fashion as the Cisco VPN client).

If you wish to keep Web Launch on then SSL must also be checked on step 3.

11)  Save and Apply the configuration

At this point the ASA will have these commands added:

If Web Launch was configured, on the client open up a web-browser and log into the ASA.  The client will self download and install.  It will connect with TLS/DTLS first.  If you disconnect, quit the client, then restart the client there will be a drop down entry for the IKEv2 connection.  Select it and the client will initate using IKEv2.

RemoteAccessIKEv2_client_profile.xml into the profile directory.  Start the client and select the drop down.  The connection will be initiated using IKEv2.

The profile locations are:

1) All client certificates must have the EKU extension with the value of "client authentication".

The ASA is deviating from the RFC in a more conservative manner.  It was chosen to be stricter, because if EKU were ignored, then it would be possible to build a IKE connection using a certificate granted soley for the use of "email signing" (or any other usage).  This effectively defeats the security controls added in PKI.

Although this post is quite old, I hope that wil get some input from you.

1. Is there a way that AnyConnect client can use the same IPsec profile (group-name, pre-shared key etc), if so where will that be configured on AnyConnect Client..?. can AnyConnect profile (XML) file will use for this..?

3. Is there any migration tool to use (convert) IPSec RA VPN to AnyConnect..?

Appreciate if you can give us some advise on this as currently there are many IPSec RA VPN groups with different configuration settings and we need to have all of them same and still use AnyConnect client as IPSec Client is already on EOL.  http://www.cisco.com/c/en/us/products/collateral/security/vpn-client/end_of_life_c51-680819.html

You can still use the same tunnel-groups and group-policies.  Just make sure "vpn-tunnel-protocol" in the group-policy allows the method you are trying to connect with.

3) Via the command line, there is a command that will do most of the work for you "migrate remote-access ikev2"

Many thanks for your response.. just one more question..

Is the certificate is must for authentication, or can we use only username/password.?

I see there are few caveats when using certificate.

For SSLVPN and IKEv2 (remote-access) the headend (ASA) must use a certificate.

The user can use:

a) Just a certificate

b) Just a user/pass

c) Both a certificate and user/pass (2 factor authentication)

I have anyconnect working before, i can login and see the display but i can't browse the internet , i try to fix it, in that process , my anyconnect stop working, each time i try to reload the image i get this message " error unable to load anyconnect image-extraction failed "  any suggest please .

What needs to be changed in order to authenticate using Smart Cards?

Hopefully this document should help you identify the missing pieces.

Thank you for your response.  This helps immensely.

Jay, in a recent thread you provided a link to a CAC and AnyConnect VPN document. http://www.cisco.com/image/gif/paws/107237/CAC-Anyconnect.pdf

This actually refers to the Cisco VPN client. Do you have a document that specifically is used for CAC and AnyConnect? Preferably 9.x and up. The DOD has mandated two factored authentication via NIST policy that is becoming the rule. Thanks!

Does this link help?

I can connect with AnyConnect IKEv2 when I follow preocedures.

There is no UserGroup in your sample profile, but is it not any problem IKEv2 works?

I have read the note in the link below but I am thinking the UserGroup is only used with  a Group-url setting in a configuration.

Or when I use IKEv2, should I always set UserGroup in a profile regardless of which tunnel-group selections use?

This Does not seem correct configuration.

does anyone know the OSL profile location of WIN 10? Because of special requirements, I had to configure IKEv2 manually.

Latest Contents
ISE posture for Palo ALto Globalprotect user
Created by charleseapen on 02-27-2021 02:43 AM
0
0
0
0
Have anyone got Globalprotect agent working with Cisco ISE posture module. ie when Remote VPN user connects via Globalprotect ISE posture module kicks and send posture info to Cisco ISE.
Remote location stream of IP based camera
Created by aadeshpandey40881 on 02-27-2021 01:50 AM
0
0
0
0
Hi. Will try and make this short Have been tasked with finding a solution to set up a streaming camera at one of our trails. It has power and possibly a pole so it can be mounted. No Wifi from ISP but can purchase a ZTE LTE router and install that. Would... view more
Running cisco Anyconnect from Sandbox
Created by JanJansen40394 on 02-26-2021 09:28 PM
1
0
1
0
Hi,I have to connect to different customers and they all have a different vpn method. So what i am doing now is starting Windows Sandbox, install the vpn client there, and connect to the client. After i am finished. I close the sandbox and everything is d... view more
ISE 2.7 - Console TACACS login being blocked after adding Ne...
Created by Hyperion0000 on 02-26-2021 08:29 PM
0
5
0
5
Hello.  I recently added a Network Condition to my Device Admin Policy set.  The idea is to only allow TACACS login from specific networks.  This worked great, but now I cannot authenticate using Console (login authentication failed). ... view more
AnyConnect Linux client installation issue
Created by DaGarzon01128 on 02-26-2021 04:56 PM
1
0
1
0
Hi,I can't install Cisco Anyconnect Secure Mobility Client in my computer with Debian 10. I have tried to install Anyconnect client with a file called anyconnect-linux64-4.4.03034-core-vpn-webdeploy-k9.sh provided for a server of my university.I run the f... view more
CreatePlease login to create content
Discussion
Blog
Document
Project Story
Video
Related Content
Discussions
Blogs
Events
Videos
Project Gallery
Content for Community-Ad