How does the ASA push the rules to the client?

One the rules are defined and a connection is being established, the rules are passed to the client via a CSTP handshake during the setup. The agent takes a snapshot of the existing firewall rules and applies the received rules to the native firewall available on the operating system. As of now, this handshake isn't tracked via debugs, any errors are only logged on the client.

What platforms are currently supported?

Linux, Windows Mobile and other new mobile platforms are not yet supported.

Where are the rules applied?

The rules obtained from ASA will be applied to the Windows Firewall present on the supported Operating Systems. For older operating systems on which AnyConnect gets installed (Windows 2000 and XP pre-SP2), the firewall feature will softly fail, logging an error message that the OS is not supported for this feature. Rules are applied to all the windows profiles.

The primarily role of the port numbers is ofcourse to identify what service to permit or allow for a certain protocol. However, the ports numbers, and how they are applied also play another very significant role. Depending on whether the source or/and the destination port is defined in the access-list, the direction in which this rule will be applied to firewall will be determined. To enumerate: 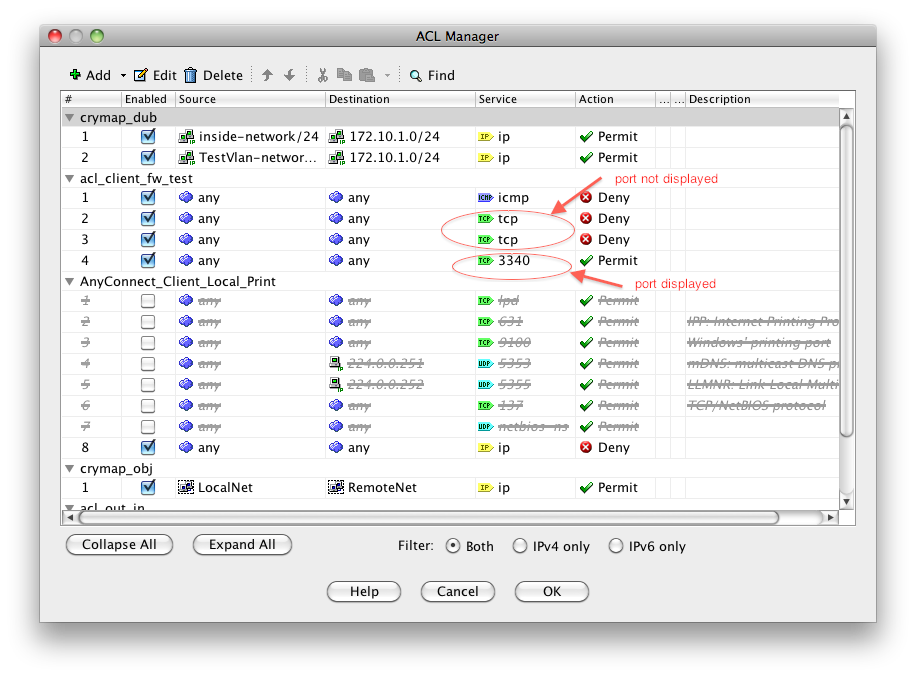 However, there are some caveates:

What is the difference between Public and Private rules?

The value public/private indicates which interfaces to apply the rules on. Public rules are applied on all interfaces on that client machine. Private rules, on the other hand, are applied only to the virtual adapter so for traffic not being encrypted these rules would have no effect.

When should the public rules not have any effect even if they are pushed down?

The administrator has to explicitly configure split tunneling of some kind for the public firewall rules to take effect. Enabling the firewall feature does not automatically imply opening local LAN. If the agent detects there is no split tunneling configured, the public firewall rules will not be applied and a configuration error will be logged. The connection will proceed. This has no effect on private rules, which will be applied regardless.

What happnes if the client is unable to apply all the rules?

Currently, if for some reason:

What happens if the local Firewall service is stopped or disabled before Connection?

If the firewall service is stopped or disabled, AC wILLenable it and start the service before applying our rules. This is done only when there are firewall rules configured on the ASA. On a service shutdown or VPN disconnect, the original state of firewall SHOULD be restored.

When should the fw rules continue to apply, even after disconnecting AC?

Sometimes even after disconnecting from the ASA, the rules continue to apply. This will usually occur if you have Always on enabled and and ApplyLastVPNLocalResourceRules setting implies that failure policy is “Closed”. This is by design. When the agent starts up, it reads the firewall rules that are obtained from ASA and keeps them in memory. On a service shutdown, they are written to the disk for possible offline usage. If on a service restart, the agent is not able to contact the ASA, the agent reads the stored rules and applies them to the native firewall, and deletes the stored copy. However with Always-on disabled or Always on enabled with Fail Open policy, this should not happen.

What happens if a third party software/root user disables the FW after the connection is complete?

Currently there is no easy way of securing the firewall rules that are created or lock down the firewall and disallow others from modifying the rules. On Windows, you can use AD GPOs to prevent  adding more rules through the Windows Firewall User Interface and to disable deletion of our rules.  However, the group policy can apply restrictions only on the basic firewall UI and not to changes made with Advanced Security UI found in Vista and Windows 7. Similarly on MAC, users with root privileges will always be able to modify the rules. So to get around this the client is designed to constantly poll the state of the FW and the rules, and if it notices any modifications, it logs an appropriate error, disables all split tunneling, and configures tunnel-all.

Thank you very much for this article. It was a great help understanding the different behaviors and scenarios that can be faced when implementing this feature. Thanks

Latest Contents
ASA5508 - ASDM User Accounts
Created by wynneitmgr on 04-06-2020 06:10 AM
0
0
0
0
New to Firewall Management and need some help. We have a couple User Accounts setup in Cisco ASDM. We htought these users were for the ability to login directly to the Firewall from "outside" our network. Is that what these users are for? Do I login to ou... view more
Cisco ASA 5515 IKE Phase1 and IKE Phase 2 question
Created by AndrejRistovski8973 on 04-06-2020 06:06 AM
0
0
0
0
Dear community,I have a customer that we have a VPN tunnel with. Since the customer is upgrading their network infrastructure there are new demands for the new VPN tunnel between my Cisco ASA 5515 and their firewall.Here are the demands: IKE Phase 1I... view more
(Urgent) Clientless VPN - gpupdate
Created by S_Shawh on 04-06-2020 04:29 AM
0
0
0
0
Hello We have a situation, due to an incorrect GPO update, all the remote users have lost ability to connect to VPN using anyconnect, they get error "Unable to load preferences file', the solution of which is to delete the profiles folder and login t... view more
Recommend Cipher Suites
Created by dm1981 on 04-06-2020 03:20 AM
1
0
1
0
Hi All, I'm looking at hardening the https server for a number of Cisco devices including IOS-XE for Cat9k switches and WLC. Looking at the devices I can see that the following Cipher Suites can be supported but I'm not sure what the current rec... view more
Multiple AnyConnect vpns migration scenario
Created by subhadip.das on 04-06-2020 03:11 AM
0
0
0
0
Hi, I am working on a migration scenario where we have an existing RA vpn of company ABC through Cisco Anyconnect. Existing setup:Users connect to "remoteaccess.abc.com" which resolves to the outside interface IP of the ASA 100.1.1.1. The client... view more
CreatePlease login to create content
Discussion
Blog
Document
Video
Related Content
Discussions
Blogs
Events
Videos
Content for Community-Ad