Some users require the key entries or access points of their networks, such as the Internet access point of an enterprise or a database server of a bank, to be highly reliable to ensure continuous data transmission. Deploying only one device (even with high reliability) in such a network risks a single point of failure and therefore cannot meet the requirement, as shown in figure 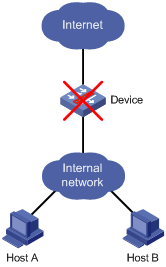 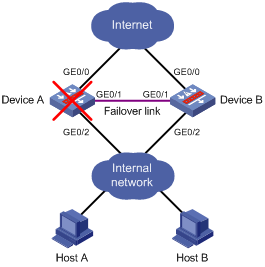 The two devices exchange state negotiation messages through the failover link periodically. After the two devices enter the synchronization state, they back up the services of each other to ensure that the services on them are consistent. If one device fails, the other device can take over the services using VRRP or dynamic routing protocols (such as OSPF) to avoid service interruption.

You can use the following synchronization methods:

Stateful failover maintains certain connections during a failover incident. However, the Internet Security Association and Key Management Protocol (ISAKMP) and IPSec SA table is not replicated to the standby PIX Firewall. Any IPSec connection that is dropped due to failover must be recreated as a new connection through the secondary PIX.

The following issues can cause a failover:

The following information is replicated to the  standby PIX:

The following information is not replicated to the standby PIX:

0 Helpful
Share
Latest Contents
Cisco IronPort MID 0
Created by sara.bennet on 08-10-2020 01:17 PM
0
0
0
0
Do Cisco IronPorts start with an MID of 0 (zero) or 1 (one)? I have only seen MID 0 for "Message size exceeds limit". Is 0 reserved for this notice or is it ALSO a valid MID when a system restarts/rolls over.  Thank you
3850 Etherchannel Management traffic to prefered member port...
Created by jlindsey on 08-10-2020 11:36 AM
0
0
0
0
I have a pair of 3850's, between them is a 5 member Etherchannel, on each Port there is a Pair of Microwave Radios, 10 in all, that have specific IP addresses for management, in a specific in band management Vlan100, it is not native and not Vlan 1, all t... view more
Custom NMAP scans failing due to bad syntax from ISE
Created by DGibson175 on 08-10-2020 11:28 AM
0
0
0
0
Hi, I've been trying to configure some custom NMAP scans for device profiling.  From looking at some debug output, it looks as though the nmap command (created by ISE, and passed to the NMAP process) has an incorrect syntax, so NMAP quits withou... view more
FMC Rule updates 6.5
Created by MassB on 08-10-2020 11:23 AM
1
0
1
0
HiI'm new to these devices and am wondering do rule updates happen automatically e.g VDB, GEODB, SRU, I recently ugraded from 6.4 to 6.5 and just wondered if i had to set up scheduling for these updates. also are they pushed out to Sensors automatically??... view more
ISE integration with Web SSL VPN from F5 APM
Created by bawagne on 08-10-2020 11:21 AM
0
0
0
0
Hello ISE Expert,   I have a customer Who is doing Remote access with F5 APM today (SSL Web VPN). They want to use ASAv avec VPN gateway with ISE as Radius server with Posture and want to still use their F5 APM for Web SSL VPN Gateway, do we have a w... view more
CreatePlease login to create content
Discussion
Blog
Document
Project
Video
Related Content
Discussions
Blogs
Events
Videos
Projects
Content for Community-Ad