Turn on suggestions
Auto-suggest helps you quickly narrow down your search results by suggesting possible matches as you type.
Showing results for
Search instead for
Did you mean:
Start a conversation
Options
1910
Views
10
Helpful
1
Replies

Quick question - can rate-mode dedicated be configured across any ports on the N7K-F248XP-25 module?  The Cisco doco isn't all that clear.  I've read here that the modules being F2 modules have fabric capacity of up to 480Gbps:

I have this problem too
Labels:
5 Helpful
Share
Reply
1 Reply 1

You wouldn’t need to use the rate-mode dedicated command on the N7K-F248XP-25 as there’s no over-subscription between the ports on the module and the switch fabric. As per the Cisco Nexus 7000 F2-Series 48-Port 1 and 10 Gigabit Ethernet Module Data Sheet “the module delivers 720 million packets per second (mpps) of distributed Layer 2 and Layer 3 forwarding and up to 480 Gbps of data throughput.”

The rate-mode dedicated command is intended for older modules such as the N7K-M132XP-12 which are over-subscribed modules. This module has 80 Gbps to the switch fabric, but presents a possible 320 Gbps i.e., 4:1 over-subscription.

As per the Rate Mode section  of the Cisco Nexus 7000 Series NX-OS Interfaces Configuration Guide:

Using this command disables three of the four ports in a group, meaning the module only uses eight of the 32 ports, resulting in a maximum 80 Gbps port facing bandwidth, and so removes over-subscription.

The following picture is the architecture of the N7K-M132XP-12 module and hopefully makes understanding the above a little easier. 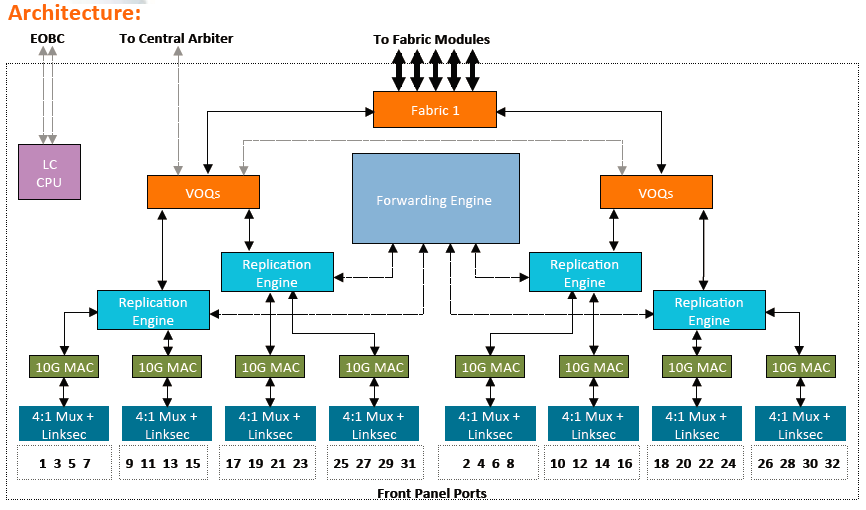