What would be the definition of a "hop" in an FCoE environmrnt?

Therefore, to me, a pass thorugh module in a blade chassi that is doing nothing more than presenting a CNA to a switch port on a ToR FCF is NOT a hop. 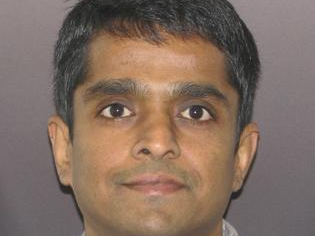 Going from a passthrough module, or FIP snooping switch(aka Nexus 4000) or Nexus 2232 FEX is not considered a multi-hop. Going from one Nexus 5000 Fibre channel forwarder(FCF) to another FCF(another Nexus 5k or MDS/N7k when they support VE ports) via a VE port is what is considered to be multi-hop. 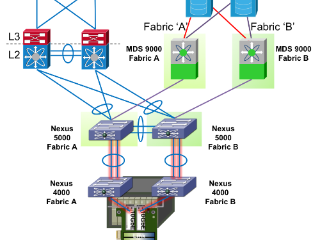 If you think about an FCoE hop like you do a FC hop, it comes down to a "hop" being a device which is capable of performing switching based on FSPF.  This is regardless of being in the FC or FCoE world.  However, in the FCoE world, this would mean an FCF (fibre channel forwarder) device.  And as prkrishn points out, DBC lossless bridges and FIP Snooping devices do not switch FCoE traffic based on FSPF -- they switch FCoE traffic like any other Ethernet frame: S/D MAC address.

Hope that helps. Let me know if you want some more information.

So, you wouldnt consider a Cisco 4000 an FCoE "hop"? I know it's not routing frames based on FSPF, but neither does the Nexus 5000 - or does it? Now Im confused.

Let me say that I definitely agree that a pass-through module or a FEX is no FCoE hop. So, no explanation needed there. But I am lost with regard to the FSPF part.

FC frames are encapsulated in FCoE frames with an FCoE header, which in turn is all encapsulated in a standard Ethernet frame, with an Ethertype, of course, that reflects eith FIP or FCoE. Where does the FSPF come in???

[EDIT] OK, I made a silly comment. The Nexus does use FSPF on its FC ports. I was thinking ony about the FCoE ports. Nonetheless, this is all very confusing because each vendor puts out their own information and a lot of it seems contradictory. Is the definition of an FCoE hop found anywhere - such as in BB5? UGH!!! I HATE FCoE! I think its crapola, to be honest. I wouldnt touch it with a 10 foot pole - if ever - for at least another 3 to 5 years. But thats another story [EDIT]

The Nexus 5000 does actually forward FCoE traffic based on FSPF.  As you pointed out -- an FCoE frame is really an FC frame in an FCoE header in another Eth header.  When an FCoE frame comes into the Nexus 5000, it gets de-incapsulated and the forwarding decision is actually made on the Source/Destination FCiD in the FC frame using FSPF.

Keep in mind this is for when the Nexus 5000 is in "switching" mode (is the FCF) as opposed to NPV mode.  When in NPV mode, the frame is pased upstream to the NPIV core where the switching decision is made (on FSPF again...).

Now, this behavior is a differentiator between an FCF and a DCB lossless bridge without FCF functionality.  DCB bridges will still forward their FCoE traffic based on Source/Dest MAC address like any other bridge. This also means that storage traffic going through a DCB bridge has to abide by standard Ethernet rules and some precautions should be taken to avoid some of the L2 impacts of STP etc.

Liz, nice "seeing" you again. I always appreciate your help.

Anyway, I have heard this debate before on the blogosphere. Whether a device is considered a hop or not seems to be a point of contention. I am also reading INCITS BB5 in its totality, yet I dont see any definition of what is considered a hop. Albeit, I havent finished reading it yet.

In my humble opinion, it makes sense to me to think of an FCoE hop as being any DCB switch that is passing FCoE traffic and acting on a level higher than the PHY and MAC layers. For example, a hop would be a device that is aggregating FCoE traffic/FLOGIs from all the blades in the chassis, or performing FIP snooping, or changing the VN-port to VF-port constructs between the CNAs and the ToR FCF forwarder switch port – basically, a device that is acting on the FCoE traffic and changing the manner in which it is presented to the ToR switch port would make the device a “hop,” just like a Nexus in NPV mode.

You're right, people do have different definitions.  Some of your examples are good to think through:

- Where FLOGIs terminate would be an FCF (hop) -- not a DCB bridge and not a FIP snooping device or NPV device.

- Where a VF port terminates would be an FCF today as well.

- FIP Snooping doesnt have any action on the FCoE traffic other then bridging it. There is no difference to how it handles FCoE traffic from Ethernet traffic.

Just some things to think about.  At the end of the day, why are you asking?  Is it for support or testing reasons?

I work for a large data center solutions provider and many of our clients have questions about FCoE because they are thinking of deplying it, have begun deploying it, or want to know more about it to see if it's a fit for their environment. As I mentioned to Hatim on the other thread I created about PFC (to which I invited you to join, yet you havent! ), there are very few people in our industry these days who truly understand the technology in-depth. There are white papers from different vendors and the IEEE, but reading isn't enough. One needs another professional with whom to have a conversation to further their understanding, bounce ideas off each other, debate and discuss. Actually having access to the equipment also goes a long way, of course.

So, here I am, the man searching for the fountain of knowledge.

Glad you're searching out answers

Just for the record, I responded to your PFC thread when you called me and rob burns out specifically

Let me know if I can help any more.

Cisco Employee
In response to estine

Liz, I see now that you responded to the PFC thread on the thread in which I called for your input...lol..Sorry, missed it. But feel free to go to the PFC thread and read my last post to Hatim there. Dont get me wrong, Hatim is great and has given me tons of good info, but I would love to hear/read your input. I figure the more brains I have behind me the better!

Vincent, Im going to read that document you sent me. Appreciate it very much.