Cisco Key Highlights: Looking Back on My Journey to Mobile World Congress 2013

Above: Watch a Cisco at MWC Highlights video

It's really impressive to look at the two towers in this rainy afternoon and the underlying square with no booth and no banner. This year the conference was at the new "Fira" and the expectations were really high. My flight was actually canceled, so I landed without a chance to take a look inside before the show. Nevertheless, we got at the "Gran Via" slightly early, at 7:00 am and took some time to look around the new building. I have to say that for the first time in 16 years of attending the conference, I felt comfortable with the space, despite the fact there was going to be 1500 exhibitors. And it would be crowded, with about 70000 attendees, but still room to guarantee a good working environment at the booths. Taking a look around, I immediately realized that if you don't show anything on SDN or IoE (or at least show you know what these acronyms stand for), you're completely out. For sure we still have the trademark of IoS (licensed to the famous consumer electronics vendor and became very famous in the mass market), so we could pretend it stands for "Internet of Something", that is a good start.

So I rushed to get to the Cisco booth and go through the demo and meeting rooms with the anxiety of a child unpacking Christmas gifts.

In the first pod we had a Small Cell Monetization Architecture demo, showing the other flip of the coin: that it is not just capacity and optimization anymore, but also offers new opportunities to monetize the information collected from the cell sites. 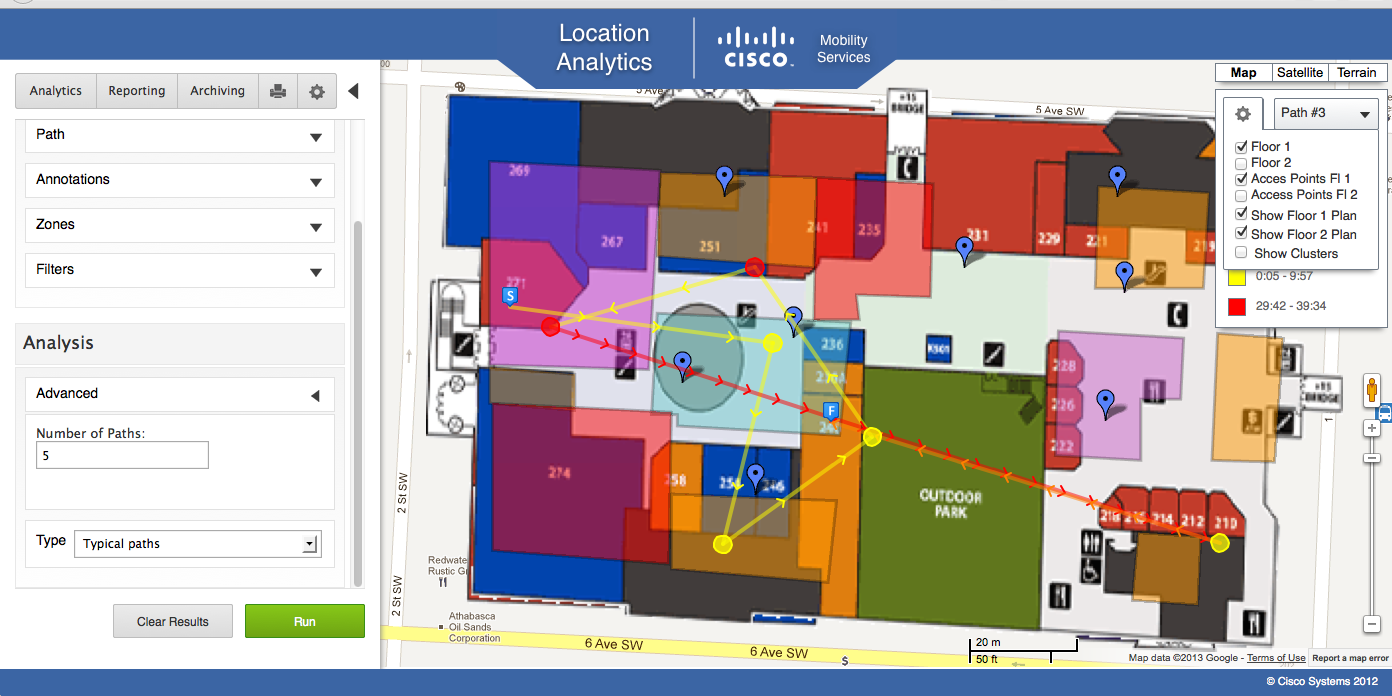 This information is completely anonymous (it's generated by cell phones' and tablet's beacon frames, even if they are not associated) and allows Service Providers to aggregate data and produce views on the dwell time for typical location and typical path of the user through the covered area.

Location analytics create new opportunities for monetizing these data by delivering in the agreed format to Enterprises (for billboards and advertisements) and by sending on-line ads to the wifi users (granted free access and agreed to receive say one ad every two minutes). This is a completely new business model that allows the Service Providers to expand the Marketing and Sales organization to fulfill these new roles and focus on sales initiatives beyond just selling new contracts (wifi can be offered for free in this model).

In the second pod I find the "magic word", that is IoE (Internet of Everything) and Network Virtualization  that should offer the right economy of scale of the networks supporting such applications. In fact, the recent Cisco Mobile VNI forecast Update for 2012-2017, shows that M2M (Machine to Machine) applications will generate just 5% of the global mobile traffic, but also 20% of the overall connections. This is the luck of the Service Providers adopting Cisco ASR5500 as a 2G/3G/LTE Gateway as it scales the capacity in a flexible way in the three dimensions: throughput, transactions, bearers. The concept beyond IoE is that every object should be addressable and locatable, thus controllable via the Internet. The demo showed the interior view of the Cisco shuttles from and to the city centre, but also the connection with sensors in the bus and the position of all the shuttles on the map, in real time. Just think about the benefits for a transportation company … and for Service Providers who could run real-time measurement of the signal, coverage and quality of the service.

In the third pod it's unveiled the content of the announcement we made last week that is the Cisco Quantum Suite, that allows for policy control, network abstraction, analytics, self-optimising networks and WAN orchestration. The final objective is to optimise the network for the best quality of experience, that will be more and more the differentiating factor in the upcoming years, with the growing hunger of bandwidth and of responsiveness of the Apps we have on mobile phones.

In that moment I saw a colleague who went around with something in his hand, vey similar to the receiver of an old pots telephone.

What's that? Believe it or not it's the first Cisco Licensed 3G Small Cell and it's an expansion unit for the Cisco 3600 WiFi Acces Points. Just imagine the opportunity for the Service Providers with networks populated by thousands of Access Points, that can be upgraded in a couple of micro-seconds by plugging this module. The backhaul remains the same, the gateway remains the same and they immediately upgrade the capacity of the network by hundreds of gigabit per second ...

There was so much news at our booth this year that I didn't have enough time to visit all of the other 1500 booths, but wanted to take the time to go and visit our partner service providers who was demonstrating ANDSF (Access Network Discovery and Selection Function) and Passpoint authentication with our infrastructure, that will facilitate the seamless network selection and sim-authentication when roaming (or handover, if within the same network) across the four different radio access technologies.

I wanted to spend some time at the booths where I saw use cases for IoE, appreciating the implementation of vertical applications in healthcare, automotive, education as mass market applications (read cheaper, thus accessible to everybody). An interesting example was an application to be used by nurses assisting old people. When they are notified of an emergency call on their wireless tablets, wherever they are, all data related to the patient automatically and immediately gets downloaded, thus having an immediate and clear indication on how to manage the emergency.

Home automation is another example, maybe the first one appearing in this market many years ago. It's impressive to note how it has evolved, and now you can do virtually everything you want remotely, controlling and changing images in the frames, light, temperature, the fridge, the oven, the coffee machine. How many of you would like to go home and find a fresh-made apple-pie or coffee? Or just hot water in the bath tub?

This recalls me I was told by my mobile phone I am missing eggs for the pancakes in the fridge and where to buy them, so I'll have to go now …

The Road to Mobile World Congress By: Stuart Taylor

Latest Contents
Buy American Act
Created by Techman2021 on 05-14-2021 06:50 AM
1
0
1
0
Does anyone know if Cisco SFP's or Cisco hardware in general is Buy American Act Compliant?
xconnect
Created by vin.marco on 05-14-2021 02:19 AM
8
0
8
0
Hi guysI have to configure an xconnect between a PE with ios XR version and a PE with ios XE version.The scenario is as follows:  I have 2 switches that have vlan, in this case 100, which must communicate through an MPLS network.The MPLS network... view more
VPNV4 label allocation
Created by dfauluchi on 05-13-2021 02:16 PM
10
0
10
0
Hi! I have a question about label allocation. I can't figure out how can I controll this behavior. I have a few PEs, all of them ASR9010.There's one that allocates a new local label for each vpnv4 prefix it receives from RR, even if label mode p... view more
BNG bundle load balancing
Created by Vladimir Pysarenco on 05-12-2021 10:57 PM
0
0
0
0
Hi all!! We are using ASR9001 for BNG. It's connected to ASR9010 with bunble 4x10G.To police users traffic correct, on BNG bundle subinterfaces this command it presented: bundle load-balancing hash dst-ipThis is for users download. For upload we... view more
NSR Disabled on standby RP
Created by jon_panes24 on 05-12-2021 12:59 AM
0
0
0
0
Hi, there are these syslog message that we occasionally get on our XR router with regards to BGP NSR going down on the standby RP. When we check the BGP neighborship or BGP NSR related commands were not seeing any flaps or anything unusual. Any parti... view more
Create ContentLogin to create content
Question or Discussion
Blog
Document
Project Story
Video
Related Content
Discussions
Blogs
Documents
Events
Videos
Project Gallery
Content for Community-Ad