How Small Cells Triggered Innovation in the Backhaul Space

The deployment of outdoor small cell base stations has been inhibited by a number of complex issues: interference management between the macro and small cell layers, backhaul, traffic localization, logistics and cost of ownership.  Major R&D spend has focused in recent years on small cells networks.  Backhaul has received its share of that spending which I estimate at over $150 million during the last three years poured into new startup ventures and projects to design and commercialize 'small cell friendly' backhaul solutions.

Recently, I co-authored a report with Senza Fili Consulting that mapped the small cell backhaul space. What becomes apparent is that despite the different small cell wireless backhaul solutions available at the disposal of network operators there are fundamentally two technologies: non-line-of-sight (NLOS) and line-of-sight (LOS) solutions. Each of these solutions has their advantage and disadvantage. The investments have been on reducing the disadvantages of each category to reduce the barrier to small cell deployments.

LOS and NLOS solutions are diametrically opposed on the performance-usability continuum. Usability here means deep reach into the urban clutter where small cells are deployed. It also means ease of planning, installation and deployment.

LOS systems which operate in the microwave and millimeter wave bands provide far superior performance than NLOS systems which operate in sub-6 GHz bands. There's more bandwidth available in the higher frequency spectrum resulting in higher capacity. LOS systems have low latency on the order of a few hundred microseconds.  They are also designed using well proven processes and techniques to achieve high link availability levels such as 99.99% of the time (or only 50 minute down time per year). On the other hand, LOS systems by definition requires clear, unobstructed path between the two end-nodes of the link which restricts the ability to reach a desired small cell location. Any future obstructions that arise can sever the backhaul link. This is no small problem in itself and I have seen many markets with extremely high density buildings rely on fiber backhaul for macrocells as LOS systems are prone to be blocked at some point.

NLOS systems on the other hand do not require clear, unobstructed path between the two link end-nodes. They will continue to operate despite at lower performance which can be managed through a design process prior to deployment. However, NLOS systems offer lower performance than LOS systems: lower capacity, higher latency and jitter, and lower link availability. 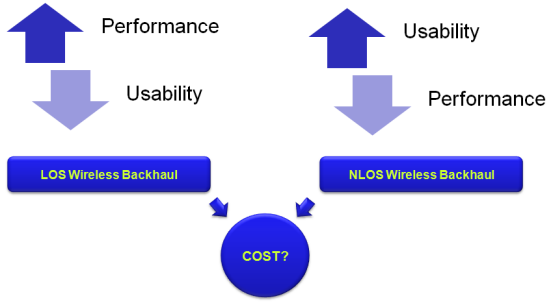 The disadvantages of either solution are inherent to baseline technologies and laws of physics. Mitigating these disadvantages is what vendors have focused on during the past three years. Today, we see two clear trends: attempts by LOS system vendors to improve usability and attempts by NLOS vendors to improve performance. Who will converge on the required solution for small cell deployments is still to be determined.

To improve usability, vendors of LOS systems began incorporating self-alignment features that allow the two end-nodes of a link to automatically align with minimal human intervention. Today, self-alignment is mechanical and it remains to be seen whether this provides a long-term solutions. But I don't think we are far from seeing one day electronic alignment that eliminates the chances of mechanical failure. As a further improvement to usability, LOS systems can be deployed in a relay configuration to reach deep into the urban clutter. The high capacity of these systems is well suited to carry traffic from multiple small cell in a relay configuration back to a main serving hub.

On the other hand, NLOS vendors have been working to implement techniques that improve performance. NLOS systems have limited capacity, mainly because they use narrow channel bandwidth (typically maximum of 20 MHz in licensed band; higher bandwidth are possible in unlicensed bands at a much increased risk of interference). NLOS also relies on MIMO to double the capacity, but MIMO is highly dependent on signal quality. MIMO also requires distinct propagation channels for its multiple streams which is difficult to achieve within the confines of a limited space. With respect to latency, it is often counted in the milliseconds. Finally, the link availability is a design factor that is governed by a large standard deviation. Hence, investment in this field has been towards hardening the NLOS solutions for carrier grade applications. Vendors have progressively increased the channel bandwidth and incorporated techniques to address the perennial nemesis of performance: interference. This includes beamforming antenna systems and interference cancellation among other techniques.

Small cells have triggered new innovations in the backhaul space because of unique requirements predicated by the deployment scenario. Both LOS and NLOS systems seek to converge on a workable tradeoff between performance and usability, but each is approaching the solution from a different route. Which solution will be there first may not matter as much as who gets to the right price point for total cost of ownership. In the meantime, there is no consensus by operators on a fixed set of performance requirements for outdoor small cells. Unless we can converge on a cost effective solution to a defined set of requirements, predictions for imminent massive outdoor small cells deployments will not be realized.

For all blog posts by Frank Rayal, visit his community profile.

Latest Contents
CEF recursive lookup
Created by eduardomora473 on 07-26-2021 09:14 PM
3
5
3
5
I am verifying the routing in a network and i see in the cef table that the field of interface appears as <recursive> so i am not really sure if this is a problem and the router are performing recursive lookups for each packet. The router are receiv... view more
MPLS label scale
Created by jaggy_learner on 07-24-2021 07:06 PM
3
0
3
0
Hi,is their a way to reduce the mpls label. I have limitation of 1M labels. I am running the ipv4 labelled unicast.
Password Reset on NCS-55A1-36H-SE-S
Created by nesttech1 on 07-21-2021 09:44 AM
1
0
1
0
Can anyone provide instructions how to reset the "Username" and "Password" on the NCS-55A1-36H-SE-S ?We have one of these units here, but the login information is lost. Thank you!
VRF ERROR
Created by vin.marco on 07-20-2021 01:11 AM
1
0
1
0
Helloi have a problem with an ASR 9006.I'm getting logs.ipv4_rib[1169]: %ROUTING-RIB-5-TABLE_NH_DAMPED : Nexthops in Vrf: default Tbl: default (0xe0000000) Safi: Unicast are getting damped 0/RSP0/CPU0 A9K-RSP880-TR(Standby) IOS XR RUN PWR,NSH... view more
SR Policy: source address is not specified
Created by Yvan.hua on 07-18-2021 11:36 PM
12
0
12
0
I built the test environment as shown, R1-R6 configures MPLS and Segment Routing. At present, CE-R7 PING CE-R8 is normal, the outer label is the SID instead of the LDP distribution label, R1-R6 Loopback's SID Troune 16100-16600.Then I tried to configure S... view more
Create ContentLogin to create content
Question or Discussion
Blog
Document
Project Story
Video
Related Content
Discussions
Blogs
Documents
Events
Videos
Project Gallery
Content for Community-Ad